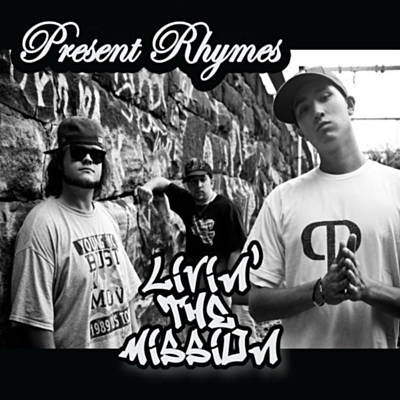 Usually white guys throwing up hand signs is my first cue to move on and listen to something else. I know that contradicts the “don’t judge a book by the cover” motto, but it’s also contradictory to see guys who have clearly never spent a minute in any hood acting like gang members. I took a closer look at the picture on the inside jacket of “Livin’ the Mission” though and can on further reflection presume (without proof either way) that they’re actually trying to spell out their group’s name. One hand could be a P (even though the top of it isn’t closed) and the other hand could be a R (even though they had to break the P to shape it) thus they are Present Rhymes. And after listening to the album they don’t come off as wannabe gangsters, they come off as underground rappers from the Northeast desperate to be noticed by someone. And that’s exactly what P.R. are – a Burlington, VT group consisting of MC/producer Mertz, rapper B. Rouille, and DJ Rico.

“Media blames rap for all the shit, what a bunch of bull
Highly trained assassins but the weapons are subliminal
We’re not the problem, we’re the damn solution
So jump on the ship, hip-hop’s the revolution”

“The Start” definitely starts things off on the right note for this aspiring trio. Mertz has a good ear for choppy layered samples that’s comparable to Evidence or Statik Selektah. The song has R&B stabs, piano riffs, hard-hitting drum beats, and echoing vocals all in the precise and proper measure to make a headnodding hip-hop track. Production is a major highlight of Present Rhymes since Mertz & Sun don’t let anybody else get a piece of the beats nor should they. “Loyalty” has the bouncy sound and soul of a late 1980’s GangStarr song. Rico scratches to open “Let’s Go” and stays literally in the cut throughout the up-tempo mellow track with occasional hints of a harder rock edge. That harder edge fully rises up on “Beneath the Surface,” rocking that hip-hop heavy metal edge that fans of M.O.P. would instantly recognize:

“Beneath the surface is more than meets the eye
Now it’s no longer a secret between you and I huh?
Welcome to where my safe is kept
My door is always open, wipe yo’ feet and watch yo’ step
My name is Brandon, it’s nice to finally meet you
And we would have met sooner, but my soul is not see-through
Neither is my heart and same goes for my brain”

Through the course of listening to “Livin’ the Mission” something occurs to me – this is the next generation of hip-hop. The kids who grew up on Motown and the Last Poets mashed it up with Kool Herc. In turn the kids who grew up on that nascent era of disco meets poetry meets beat breaks became the “Golden Age” rappers so many of us put on pedestals. They in turn became foundation for an ever bigger dispersion of the hip-hop diaspora and a subsequent rebirth of the independent underground rap scene, and now Present Rhymes is the generation that grew up in the 2000’s in the post-Eminem era where hip-hop music and culture had long since become mainstream in America. What I was at first eager to interpret as unnecessary posing in their photo, or possibly even hipster irony, was in fact sincere affection for hip-hop.

Now at times, Present Rhymes may be a little too ernest and eager in their “we live and die for hip-hop” attitude. That’s not to say I question the fact these Vermont emcees truly appreciate the culture – they grew up on a diet of Wu-Tang Clan, Nas, Hieroglyphics and Primo beats. Not only did they get it, they got inspired to get good at it – and they are good. That said that sincerity may be a little off-putting to some given they hail from a place known more for its proximity to the Canadian border than for being the birthplace of great hip-hop. You never hear anybody talk about “money-earnin’ Burlington” in a rhyme. This is the kind of thing the culture is going to have to learn to incorporate though. You can’t commercialize and sell hip-hop culture across the country and around the world without having the seeds take root and grow in the most unlikely of places. Perhaps Burlington will become a new mecca for rap… nah. Present Rhymes are more likely the exception and not the rule for this town but they are good at their craft and worthy of a look from the larger rap scenes.