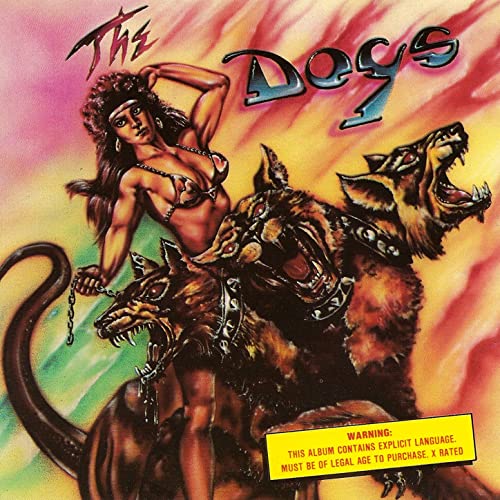 The Dogs :: The Dogs

One of the strangest rap hits of my childhood was “Crack Rock” by The Dogs, better known by the title “Your Mama’s on Crack Rock.” The track combined the Miami Bass sound of Luther Campbell with the stilted flow of a late 1970’s disco rapping emcee. When you learn that the group’s frontman and leading force was named Disco Rick, it comes as no surprise whatsoever.

Before I had ever heard the term “one hit wonder” or associated it with any of the acts of the 1980’s, “Crack Rock” was the kind of song I figured was a comedy one off like Rodney Dangerfield’s “Rappin’ Rodney.” To my surprise though The Dogs released an entire album which appropriately enough was titled “The Dogs.” Now whenever somebody asks you “Who let the dogs out?” (another one hit wonder) as a joke you can actually answer “Joey Boy Records” with a smug grin.

“Fuck the President” was written about George Bush, but the sentiments behind it could have easily been about POTUS 45. “I don’t give a fuck about the motherfucking President/Look how he live in our motherfucking residence/Motherfucker living in a house of luxury/We pay the bills for that so he should be/living in the projects, where I live/and motherfucker will know what the deal is.” He even slips in reference to choking that was quite prescient given George W. Bush would be President a decade later. As much as I enjoy it there’s no doubt it’s a weird song. The production sounds like very early N.W.A, and the repeated careful pronunciation of “fuck” and “motherfucker” makes that sound feel CALCULATED. It’s like The Dogs wanted to have their own “Fuck Tha Police” song, but it never took off. It’s a recurring theme for The Dogs though — quite literally.

Even though the group has multiple members according to Wikipedia (Disco Rick, Keith Bell, Labrant Dennis and Fergus Smith), their delivery becomes as interchangeable as the lyrics. You can compose your own version of the song by asking the question “Who gives a fuck about (insert noun)” and then responding “We don’t! We don’t!” in unison. It’s funny that the song includes the line “Who gives a fuck about Donald Trump?” but given how many names they drop he was bound to come up somewhere. When they’re not too busy running out of fucks to give, they do their best 2 Live Crew impression on tracks like “Let’s Go, Let’s Go.”

Honestly as someone who doesn’t care about cursing one way or the other, there’s just something TRY HARD about “The Dogs.” It really feels like they were trying to get this record banned on purpose, knowing the controversy would make them mainstream superstars with platinum records. This album never got higher than No. 37 on the Billboard Rap Charts though and I never heard about it being banned at MusicLand, Sam Goody or Tower Records. As a matter of fact I never heard about “The Dogs” at ALL so clearly no matter how many times they told people to “fuck off” nobody cared about it, which is pretty much the ultimate “fuck you” right back.

The Dogs managed to stay together for three albums, but none ever charted higher than their self-titled debut. If I said I was surprised by that fact I’d be lying. The only reason you should listen to “The Dogs” is for the novelty hit “Crack Rock,” and the one reason you absolutely shouldn’t listen to it is that these dimwits had the bright idea to make a song called “Ten Little …” and I’m not going to fill in the “…” for you, but they spelled it the way a Southern racist jackass would. They wanted SO SO BADLY to be controversial but when it’s this contrived it ends up being a joke — and not a funny one.