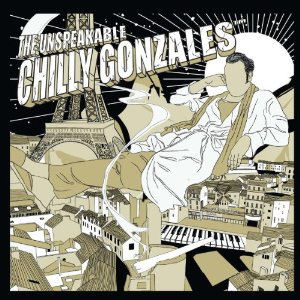 There may be few more unlikely rappers than Chilly Gonzales, the man who admits he’s “self-absorbed (and) a musical maxi-pad” who finds himself more “at home in a taxi cab” than on the mic. This unusual Canadian emcee isn’t even close to being as hispanic as his nom de plume, as he was born with the name Jason Charles Beck. When he’s not rapping he goes by just Gonzales, but then again when he’s not rapping he’s playing piano, for which he was classically trained at McGill University. The deeper you go into Chilly’s bio, the weirder things get. He spent years as the frontman for an alternative pop rock band named Son, he moved to Berlin even though he didn’t speak a word of German, and he once challenged the unkempt rocker Andrew W.K. to a duel of pianos at Joe’s Pub in New York City. Observers claim he won when he distracted Andrew by throwing a gold chain.

Usually when artists have a bio this wild or outrageous, I either assume that they’re completely full of shit or that their life’s story has been exaggerated to an absurd degree to make someone ordinary come off as extraordinary. The rap from Chilly suggests otherwise, as he’s quite charmingly disarming, sounding more like a spoken word poet who finds himself gravitationally pulled toward hip-hop. The fact he’s a piano virtuoso can be considered an accident, a happy coincidence, or just a curiosity. The fact that he can play his own instrumentals is a plus, and in fact he’s performed while other Canadian emcees have rapped over his ivories (Drake comes to mind) but it’s not his oddball persona or his instrumental acumen that draw you in – it really is his rhymes. Chilly is what would happen if a rapper made every song like the denouement of the movie “8 Mile,” dissing himself before you could. “Self Portrait” says it all literally, but it also finds time to elevate pop culture:

His flirtations with the absurd or self-deprecating are a bit reminiscent of fellow Canadian rapperD-Sisive, although lacking D’s sometimes dark melancholic introspection. Many of Chilly’s songs are remarkably short, with tracks like “Rap Race” clocking in at under two minutes. Brevity is to his benefit, as it allows Chilly to make points without becoming tedious or uninteresting – and he certainly does have them. For all his jokes and his off beat attitude, he cares about hip-hop. One gets the feeling it’s the only thing this eclectic eccentric takes seriously.

“If you don’t like rap, then face it
You probably hate this, you’re probably racist
We can debate it as tasteless
But I am not a musical rapist
Those videos, booty and fake tits
You owe it to yourself, embrace it
The free market, at its most basic
Obsessed with ‘Cars’, like Ric Ocasek
Remember when it used to be conscious?
It’s better now – they talk about watches
And if that makes you nauseous
I bet you don’t know who the boss Rick Ross is”

Clocking in at 40 minutes total with instrumentals included, “The Unspeakable” isn’t unremarkable. It’s a short but powerful journey into the mind of a man who has worn many hats over the years, but finds the nerdy rapper from Canada that plays piano to be the most comfortably fitting. That hat must be a took. Even if Chilly isn’t always serious, “The Unspeakable” is a surprisingly good album that even hardcore rap purists should take seriously.