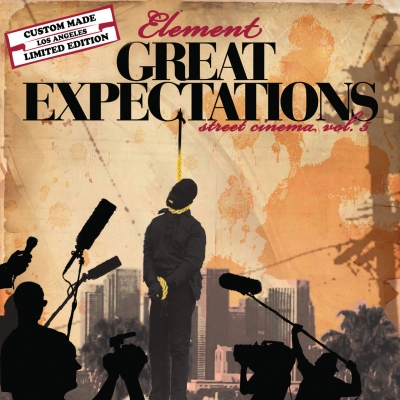 There is a football team in England called Newcastle United. They have massive support, attracting capacity crowds of over 50,000 people every week. They generate a massive income, and can afford to pay their top players around £100,000 a week (that’s $200,000 to most of you). Their aim is to be everyone’s “second favourite club” – meaning that they wish to charm rival fans and neutrals into indirectly supporting their brand of football. There is just one little thing – they never bloody win anything. In fact, they haven’t won anything for about forty years. They look like a big club, act like one, and their supporters certainly think they are massive. Even though reality slaps them in the face, week after week, they refuse to accept the truth. Now the supporters claim they just want to be “entertained.”

This brings us to Element, the founding member of the hip hop quintet Custom Made – who, it has to be said, are shifting units of their mixtapes, apparently over 100,000 worldwide so far. That is impressive in any field, and over the last couple of years Element has squeezed in the time to craft his very own mixtape, “Great Expectations.” Except that to call it a “mixtape” is a slight misnomer – it contains entirely original beats, lyrics, choruses, the works. It seems to be a precursor to the album, the real group album, that Custom Made are dropping in the next few months on Babygrande Records. If anything, these guys are hard working and realise that productivity is key to getting anywhere in this DIY landscape. So how does Element fare on his own?

The first thing to report, if I may, is the success of Abstrakt Soundz, the Custom Made producer – he handles ten of the thirteen songs with great aplomb, and if they can relegate an instrumental like “Lay ‘Em Down” to a mixtape, then they must have real confidence for the album. It is DOPE. And, like Nelly Furtado, he is not a one-trick pony, managing to cover hard street bangers as successfully as the glossy R&B of the excellent “I’m Sorry” featuring the tuneful crooning of Wade Benjamin. The shadow of Dr Dre looms over the atmospheric plucked-strings of “Club Epidemic.” A schizophrenic beat that channels the Neptunes at one moment and Salaam Remi the other fuels the shoe-love affair of “Chucks.” The sweet jazzy soul of Just Blaze laces “Devour the Game” – Abstrakt Soundz can cover them all, and really could be a producer to watch.

What of the artist, Element? It is immediately apparent on the first listen that he has that enviable touch of uniqueness to him – the mixtape is packed full of creative concepts, hot couplets, rhymes that make you think… Frequently reflective, occasionally cocky, always passionate. He can take an idea and, like Lupe Fiasco in some respects, expand on it whilst never losing the listener. “Chucks” is the most obvious example of this – it is a song about shoes, somehow making you look down at the pair on your feet with love and appreciation. The dark moody underground sound of “Overkill” contrasts well with the concept songs – it flat out attempts to impress you with strong lyrics and more intricate rhyme patterns. For a mixtape, it really leaves you thinking that an album by this guy could be hotter than hell. It is not all love for Element, though – an Achilles heel threatens to cripple his solo career, and that is not being melodramatic. He really needs to sort out his flow and breath control pronto, as he would struggle to find genuine success if it remained as it is at present. Creative concept and talents will only carry you so far in life, and the bottom line is that he could do a LOT better vocally in the future. It is infuriating, as at times his flow is solid and on point (“I’m Sorry”) and at others, completely off (“The Element Project” and the otherwise excellent “As The World Turns”). It is a real and true shame, and anchors a ship that is otherwise ready to set sail.

But getting back to the case of Newcastle United, a funny thing happened on Saturday. They were playing at home to a solid rival, and Newcastle totally outplayed them, created chance after chance, and somehow contrived to lose 1-0 in the very last minute (this is typical of their woes). But a wondrous alchemy beheld the stadium – once the final whistle blew, half the stadium predictably booed with disappointment, and the other half cheered. Those supporters that just wanted to be “entertained” had witnessed a fine match, and even though they lost, they felt proud of their team. They put their money where their mouth was. This made me think of Element and his mixtape/album. You see, he has put his money where his mouth is, and crafted a body of work that contains some truly fantastic ideas, genuine creativity and wicked music. The problem? His flow and breath control. It lets his solid lyrics and excellent concepts down badly. In other words, he plays well, impresses you, but still loses. And yet, I find myself standing and applauding him. At least he tried to entertain me, even if the end result isn’t a genuine victory. At least he tried.