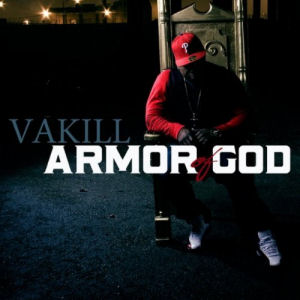 “Put on the full armor of God so that you can take your stand against the devil’s schemes.” – Ephesians 6:11

Musically, Vakill has never been in need of any outside assistance to succeed. Chicago has always had a reputation for lyrical rappers, but even amongst the Commons, Rhymefests, and Juices of his city, Vakill rises above the crowd. Blending a sharp tongue with street smart semantics, Vakill’s music resonates with hardcore hip-hop fans across the country. Even with all the lyrical talent in the world, Vakill has not become the household name he should be. Despite being an active emcee beginning in the 90s, Vakill’s official debut didn’t come until 2003. His sophomore album didn’t come until three years later and “Armor of God” comes to us five years after that. With all those delays, it seems Vakill could use God’s helping hand when it comes to releasing music. Of course, the title is more than a metaphor for the challenges Vakill has faced in the music industry. The devils Vakill fights are very real and his music remains grounded in creatively presenting those real life struggles.

“Hi Ate Us” kicks things off with a short two minute track where Vakill addresses his absence from the music scene when he states “my hiatus is due to burying my closest kin, I’m sorry I lost some focus last time we spoke as men.” It says a lot about the man when he apologizes to his fans despite having a legitimate reason for being unfocused. “Armor of God” is the first real song on the album and finds Vakill unleashing the type of wordplay rarely seen in the rap game today:

“I’m from the era where we murk the bearer of bad news like Leonidas
And family don’t speak til tragedy reunite us
Scout to see who tightest and slay hoards
Who want to test V-A sword
Who want to meet the fuckers, no Gaylord
An angelic presence, the delicates blessing
It’s hell and it’s heaven
My flow is God’s relic and essence
…
No industry flow active can hurt me
The upper echelon’s about as effective as pro-activ to herpes
…
I write the sickest shit to hit white sheets since cross burning caucasoids
…
The game will never be fixed
Cuz every new nigga heavily bricks
And exploited like 70s flicks
Machine or beast cleverly mixed so
Fuck around and get carried by six
Like the Nuggets in seventy-six”

Vakill drops more clever lines in the first two verses of the title track than most rappers pack in their entire albums. His music remains raw and hardcore without coming off as nerdy or dense. “Mean Mug Muzik” is an anthem dedicated to “that new Chicago gangsta” and finds Vakill giving us a tribute to his city while unleashing lines like “spit divine as corpus christi, flowing hell fire til your corpse is crispy.” “Sick Cinema” is a gritty collection of street tales where Vakill shows us that dope punch lines don’t have to be strictly about bragging when he declares that “everything that glitters ain’t gold, and what’s gold is piss glistening” as a way to express the despair and darkness that surrounds him.

To say Vakill is on his game on this album is quite an understatement. Every song has a number of quotable lines that mesh seamlessly with Vakill’s verses. The album is balanced with Vakill showing focus on every song. “Heavy” is a reflective track dealing with the pressures and expectations he faces. “Endless Road” is a somber, but motivating, track speaking on the constant struggle to succeed. “The Apology” serves as a conceptual track where Vakill takes on several roles, including that of a gang leader who eventually hurt the neighborhood he intended to protect with his gang. Perhaps the most serious track on the album comes with “A Lynched Legacy” where Vakill aims to educate the youth on the violent history of race relations in this country.

Musically, the Molemen, Jake One, and others provide Vakill with plenty of memorable beats to ride on. “Armor of God,” produced by Jake One, contains a pounding blend of horn, piano, and bass samples that are complimented nicely by the scratched up quotes in the hook. “Wild Wild,” produced by Bluntologist, gives us a completely different vibe with the classic Chi-town sound of sped up soul samples and jazzy samples over laid back drums. “Beast Ballad,” produced by Panik, meshes the best of both those styles with energetic synth stabs and hard drums softened up with a sweet cascading vocal sample. Even tracks that initially sound average find their groove. “I Came For U,” produced by Panik, kicks off with a simple repeating piano sample, but the bass break down and strings and guitar that kick in during the hook take the beat to another level.

With all the praise heaped upon “Armor of God,” it’s no surprise that the album is among the best, if not THE best, out of the albums that I’ve heard this year. There really isn’t one bad beat on the album. Jake One’s “Proof” is the closest it comes as the hardcore horns come off a little formulaic and lifeless. While the album lacks in the type of instantly recognizable, head-nodding beats usually associated with classic tracks, the production itself is by no means lacking. Lyrically, Vakill delivers verse after verse of focused, vicious, and thought provoking lines. With limited guests, the only emcee that fails to deliver is Nino Bless on the posse cut “Beast Ballad.” In the past, some have labeled Vakill an immensely talented emcee who has not reached his potential. With “Armor of God,” he’s pushed himself past conditional compliments and cemented his status as the best emcee in Chicago.