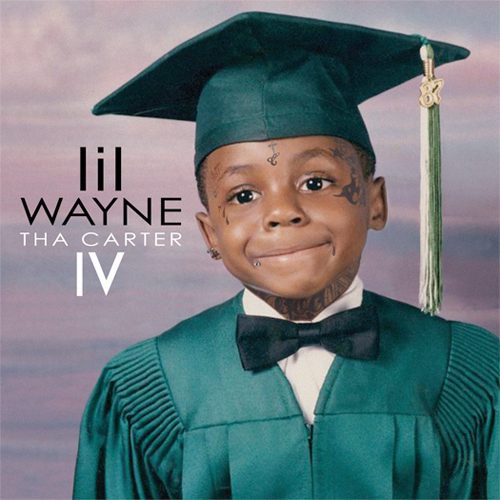 Young Dwayne Carter will be the first to tell you he’s not a role model. If you work in law enforcement you probably see dollar signs flashing before your eyes the moment his tour bus hit town. Even if you couldn’t get Mr. Carter on a drug or weapons possession charge somebody with him would take the hit. It’s a three way race between Lil Wayne, DMX and Gucci Mane for which famous and successful rapper can go in and out of prison the most times in his career. With all that said Wayne has come a very long way since his earliest Cash Money days, when he was routinely being sonned by B.G. and Juvenile on records. The main thing he had going for him initially was his youthful charm and the people around him supporting his career. Since then he’s grown into a full fledged artist, and while the legal system has not been kind to him, his fanbase certainly has. It would be shocking for a volume of his “Carter” series to not ship gold and go platinum, and even when he’s dabbled in singing and rock, those same fans have stayed loyal to his brand. He is at this point a household name in pop culture, someone even President Obama professes to have on his iPod.

Let’s imagine a scenario for a second where Wayne had managed to mature into the artist he is today without all the legal complications and jail bids. Even if such a situation existed, it would change none of the issues that Weezy’s critics have with his music regarding his message. They’ll tell you that he glorifies a self-destructive lifestyle of alcohol and drugs, that his rhymes are homophobic and misogynistic, and that he makes being a criminal sound like fun instead of a ticket to an early grave. The fact Lil Wayne has profited from his tales of urban misadventure seems like the worst kind of insult to these naysayers – they’d probably rather he stayed in prison and never got out. Some would even like to cleanse hip-hop of Wayne and anybody like him, completely sanitizing music as we know it, leaving us a whitewashed world where only positive messages and happy thoughts exist. That completely ignores the reality of the Hollygrove area of New Orleans he grew up in, but those same people are probably trying to pretend there’s no such thing as slums, impoverished neighborhoods or ghettos in the U.S. much less anywhere else in the world.

Real life is not rainbows, sunshine and lollipops. “Tha Carter IV” is an album that encompasses the reality of Dwayne Michael Carter’s life, both positive and negative, the reluctant role model that he’s become balanced with the lifestyle of lavishness any of us would love to enjoy were we in his shoes. The same people who think he’s not entitled to his rise from poverty to power are the same quasi-racist people who have said “rap is not art” all along and think making a good hip-hop album isn’t hard work. They’re not the ones spending hundreds of hours in the studio trying to craft catchy hits, all the while sweating the difficulty of trying to please fickle fans, while simultaneously being able to reinvent yourself enough as an entertainer to stay interesting. They’re not the ones having to tour the country and the glove to support that album once it’s released. And yes, even if some of his pain is self-inflicted by his own bad choices, they’re not the ones being harassed by law enforcement. When so many people seem ready to crucify Lil Wayne for not being a role model, that just causes me as a critic AND a fan of his work to appreciate him more. No one was harder on him in the beginning than me, so no one respects him more today for risking it all on a song like “How to Love”:

“When you was just a young’un your looks were so precious
But now your grown up, so fly it’s like a blessin
but you, can’t have a man look at you for five seconds
without you being insecure
You never credit yourself, so when you got older
It’s seems like you came back ten times over
Now you’re, sittin here, in this damn corner
Lookin through all your thoughts and lookin over your shoulder”

Weezy is not a great singer, and should never be mistaken for such. He needs a lot of help from Noel ‘Detail’ Fisher, Drum Up, and a multi-track recording studio, with AutoTune on speed dial just in case the vocals need extra manipulation. That being said give the man some fucking credit for once – yes man because Wayne really isn’t that Lil any more at 28 years old. He knew full well that both his fans and his critics could and would shit on him for releasing a single where he sang, and he did it anyway. The same people who complain that he’s nihilistic, misogynistic and not redeeming in any way should actually look at this track closely. Yes it’s a catchy and slickly produced tune, but beyond the melody there’s actually a message for the young women of the world in his rhymes. Wayne wants to inspire self-confidence with these lyrics, for women to look to their inner beauty, then radiate that outward without waiting for any one to give them a compliment first. Perhaps he’s not saying anything revolutionary, but consider who said it and what people say about him, and then that he SANG IT.There’s definitely a new and more thoughtful attitude to Wayne, one which can be seen and heard in songs like the Infamous produced “President Carter.”

“Sittin on the world, I got life in my hand
So these days I try to think twice when I can
Money on my mind, as God is my witness
Love don’t live here, and it don’t even visit
I do this for my Uptown politicians
Walked in the kitchen, and found a pot to piss in
Niggaz ain’t satisfied until they momma missin
Niggaz ain’t satisfied until they momma miss ’em”

Whether you agree with his life, his lyrics or his lifestyle or not, you can hardly argue that he’s not putting thought into his rhymes, even when they’re being braggadocious or extravagant. It’s very hard to argue that he’s not making catchy hip-hop either way. The Bangladesh produced “6 Foot 7 Foot” is one of the most memorable rap songs to come along in the last two years, and the Polow Da Don produced “John (If I Die Today)” featuring Rick Ross isn’t that far behind. The former takes an unusual step of building an entire melody out of “The Banana Boat Song” while the latter is one of the most over-the-top electronic hard hitting lush melodies imaginable – made all the more dramatic by an introduction that references a science-fiction like invasion all the more appropriate for how futuristic the song is. It’s like DJ Khaled came back from 30 years in the future with a song for his two favorite rappers to spit on. The songs by lesser known producers like Develop that haven’t been released are just as interesting though, such as “Blunt Blowin”:

“I live it up like these are my last days
If time is money, I’m an hour past paid
Ughh, gunpowder in my hourglass
Niggaz faker than some flour in a powder bag
Yeah, I put it down like my hands hurtin
I’m on a natural high, but I land perfect
Some of us are lovers, most of y’all haters
But I put up a wall, and they just wallpaper
So love or hate me, I stay hate-free
They say we learn from mistakes, well that’s why they mistake me”

It’s definitely a mistake to underestimate Wayne at this point. He’s got almost as many different producers as he does songs on “Tha Carter IV” but each one manages to bring out a different facet of Weezy’s style while still making it shine. Snizzy and Kenoe go quiet storm and piano keys with “Nightmares of the Bottom,” and Wayne responds by dropping his already deep flow an octave deeper to round it out. “How to Hate” featuring T-Pain may seem like a comical anthesis to “How to Love” at first, but in fact it’s a chance to team up over a Young Fyre beat and address love gone wrong. Songs like “So Special” with John Legend have a deep cool that goes beyond their Cool & Dre beat, while Young Ladd adds two cents musically on “It’s Good” featuring Drake and Jadakiss and changes it to a heavy hitting song that knocks a home run straight out of the park (and some say disses Jay-Z in the process). If you get the deluxe version, you get even more dopeness after the “Outro” with Bun B, Busta Rhymes, Nas and Shyne – on most versions three tracks including the thoughtful “Mirror” featuring Bruno Mars.

I searched high and low on “Tha Carter IV” for something to complain about to make all of his haters happy, but this album entertained me from start to finish and there wasn’t a single song I regretted listening to. Lil Wayne, Weezy F, Dwayne Carter or whatever else you choose to call him has a lifestyle that should probably not be imitated, and given the hard way he grew up a background that should ideally not be duplicated. As much as people want to heap hate on him though, I’m not going to join the bandwagon, and that’s probably because I see something in Wayne beyond using the word “bitch” too much or drinking too much champagne. I see a complete artist, one who recognizes the good and the bad in himself, and of the world around him at large. I see a man willing to go out on a limb knowing damn well it could snap off and send his career crashing down quickly. I see someone who knows he’s thought of as a cartoon who nevertheless tries to give of himself personally in his songs to the point negative criticism must genuinely hurt. I like what I see and hear on “Tha Carter IV” and no one is going to convince me he isn’t a full-fledged artist worthy of being the household name he now is.