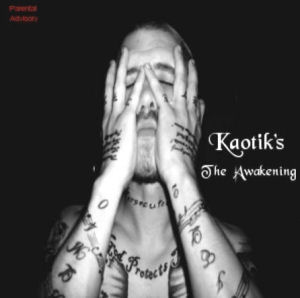 Seasoned rapper Kaotik has paid his dues after releasing three albums and seven mixtapes in the past twelve years. His Tennessee roots add a certain style to his music and with his distinct voice and rhythm, Kaotik thrives in the rap industry. He retains a sound that you may not have heard before, and thus seems innovative and original in his latest installment of “The Awakening.”

Although “The Awakening” follows the common trend amongst rap albums and highlights the existence of violence, drugs, sex, and the high life, Kaotik is able to recognize it in his own way. Taking his own personal experiences into consideration, Kaotik takes this knowledge and translates it into music thus shedding light into his own life. A level of vulnerability remains throughout the album as he exposes himself emotionally and spiritually, yet at the same time, without letting his guard down.

“The Awakening” starts out strong with “Awaken” as the heavy synths and Kaotik’s distinct vocals are heard. Although at times it’s somewhat difficult to comprehend Kaotik’s verses as he tends to meld his words and sentences together, when you are able to understand his message it is worth the deciphering. “Give ‘Em Hell” follows and features emcee Valley on this bass heavy track while simultaneously mixing in some southern flair.

Throughout the album, Kaotik touches upon unoriginal rap album themes as he shows his daily struggle and trying to get paid in “Grind” while also representing his city in “My City.” He also takes an odd turn at times as he dives into sentimental love songs such as “I Miss U” and boasts pitchy singing in “Hated.” I could have easily done without these tracks as I wish Kaotik focused more on his reflective lyrics.

However, Kaotik surprises at times, especially in his introspective track “Dead” as he contemplates his existence and how his own death would affect others as he says:

“Mama, can you tell me this
Would things be grim
Would I be missed
If I were dead…
Paint yourself a different portrait
Full of nights when you so often
Overlooked and overshadowed
If life’s a joke
Why is no one laughing?
I’m all alone
Just like you I find a song
To pass the time when time goes slow
‘Til you look back all time is gone”

Although “The Awakening” reminds you of something you once heard before, Kaotik’s distinctive style and cadence keeps it fresh and intriguing. Overall, the album’s production is robust and runs the gamut of sound from track to track, keeping you interested from start to finish. While incorporating his own life experiences and emotions into the album, Kaotik exposes himself in the truest form and with some fine tuning he’ll be able to reach great heights as an emcee and artist.