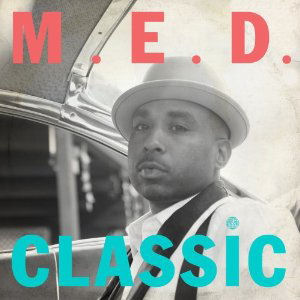 The name has changed a little over the years. In his guest appearances and on his solo albums he’s been known as Medaphoar, Med or more recently as the capitalized and punctuated M.E.D. It really doesn’t matter what you call him – it matters more who the Oxnard, CA based rapper rolls with. If you already know Oxnard and/or the Madlib (a/k/a Quasimoto), his brother Oh No and Lootpack frontman and soloist Wildchild among others. Despite being well connected and well liked, Med has only released one album, and that was back in 2005.

The official drop date for “Classic” is November 1st, but thanks to a publicity connect with his label, we got this sneak peak at his first album in over half a decade. Much like his career its arrival was something of a curiosity, as we got no advance warning it would show up, and it didn’t come bearing any of the usual warnings that breaking the seal meant you were personally responsible for the digitally watermarked tracks (labels be paranoid about leaks yo). Nope – this was just a regular shrinkwrapped joint like you’d get at your local stores save for a hole punched out of the barcode. M.E.D.’s new project clocks in at 41:47 total running time – not overly long but certainly highly anticipated given how long his sophomore effort took. That timespan is spread out over 14 tracks, 10 of which are produced by Madlib. The remainder go like this: “Int’l” is produced by Georgia Anne Muldrow, “Where I’m From” is laced up by Oh No, “War & Love” is handled by The Alchemist and Karriem Riggins does the title track “Classic,” which also features Talib Kweli:

M.E.D.: “Street methods – reflection of death no face
Beef, hard to swallow with no taste
At least, I die on my feet in defeat
No coward, dead with a heartbeat
In a park fleet hood in the hood with K. Riggs
Madlib, connect lane like Bay Bridge
Same kids, Dan Hooper looped this
Cain’t stop, hip-hop since eighty-six”

Talib: “Life – it’s an honor and a pleasure
I treasure bein the voice of the +Children of a Lesser
God+ gon’ test ya, you gotta survive when he apply the pressure
and give you a shock like a lie detector
Where were you when they was passin our karma?
Don’t let me black out on ya, I’m blastin outer space
like the astronaut farmer cause the inner city griots
is obsessed with the kilos
Homey your range is shorter than Danny DeVito”

As enjoyable as a collaboration like this may be it has the unfortunate tendency to showcase one of the reasons M.E.D. is best known for guest appearances. He has a deep, distinctive and pleasant voice. He flows fairly well, although the diction could at times be clearer. Beyond that, M.E.D. doesn’t really distinguish himself as a lyricist. Talib Kweli bends rhymes that go beyond the boundaries of bars, then drops the punchlines that make you laugh or pop you as a hip-hop head like “I’m +Next Level+ like Show & A.G.” M.E.D. really doesn’t do that. Smartly 8 out of 14 tracks don’t have any guest appearances, but when the likes of Planet Asia and Kurupt show up on “Roll Out,” he suffers.

There’s still plenty to appreciate about “Classic,” given that M.E.D. is far from whack, just somewhat uninventive in terms of his lyricism. Much like his last album, quality production really helps him out, especially given Madlib is the only man on the boards from track 6 until the finale. “Get That” has a pleasant Middle Eastern influence, “Blaxican” is some straight up [adult swim] bumper music hype, “Outta Control” bangs on intentionally overproduced drums for a modern day boom bap sound, and “Flying High” lives up to its name by being a light and breezy affair. You can’t go wrong with almost any of these tracks, from the chunky West coast funk of “Where I’m From” featuring Aloe Blacc, to the silky smooth “1 Life 2 Live.” We refer to the music and lyric scores on this site as “vibes” and M.E.D. certainly has them on production – the good vibes elevate him and his album as a whole. Consider copping this one.