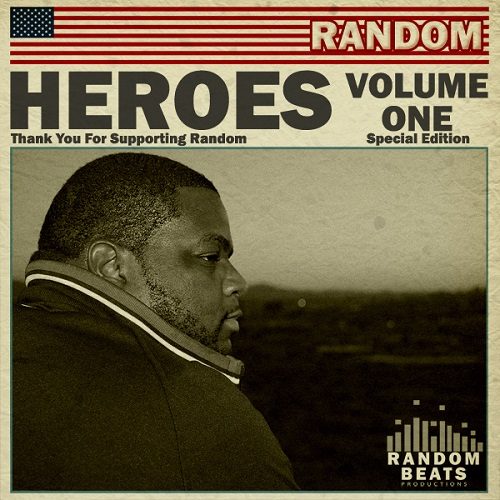 Raheem Jarbo is a hip-hop artist who maintains two different personas with one impressive voice. On the one hand there’s Random, underground hip-hop rapper and producer. On the other hand there’s Mega Ran, unapologetic video game enthusiast making cool concept albums and rhyming about robots. The good news for rap listeners is that he’s never been forced to choose one over the other, and both have received critical acclaim for their releases over the last ten years.

With his latest free album “Heroes, Volume One” Jarbo chooses to acknowledge both personalities in listing the credit artist, although it is telling that Mega Ran is put into parentheses. Random is not disavowing the dopeness of side scrolling, triple shot shooting, blue clad warriors from the year 20XX and beyond – rather he’s putting that aside just for now to speak on something personal to him. This is a “concept album” too but it’s not rooted in dreams of electric sheep – it’s rooted in classic R&B music and the artists who inspired Random over the years. Each song on “Heroes” comes with an introduction that explains why the particular legend he pays tribute to on the track that follows means so much to him, starting with James Brown on the album’s first song “Higher”:

“I do it to death, who wanna test
Movin the best as I prove to the rest
Still rep the Ace, still rep the streets
Godfather of Soul, may he rest in peace
I came with the vocals, game in a chokehold
International appeal but I’m local
Philly to Phoenix, feelin extremist
Non-believers throw it up like bulimics”

DN3 provides the production backing his triple-timed flow, giving the appropriate amount of James Brown soul to the song, complete with JB’s trademark excited yelps of musical soul bursting from his larynx. When Random vows that “by the end of this record you gon’ have a good time,” he’s not kidding. The tributes continue through this 11 track release, each one showcasing a different slice of freshness from music’s history. Ran describes Marvin Gaye as “Tupac to his generation” before delving into the funk on the CJ produced “Hand Me Downs.” From there we transition to a very familiar Marley Marl piano loop as Ran gives his props to Otis Redding, and then he surprises us all by letting his video game persona come out on “Pain in My Heart”:

“Aiyyo we met when I was 11, new girl on the block
Foreign exchange student, that didn’t really talk
She came from Japan, and barely knew the language
But within a week I learned that she was cool to hang with
And she was cute, knew how to have fun
And so my biggest crush had officially begun
Adrenaline junkie so we stayed into somethin
Runnin and jumpin, even +Duck Hunt+in
Met with her after school every day faithfully
She was never too busy, always played with me
And yeah we built up trust over time
Told me her biggest secrets and I told her mine
And moms started worryin ’bout the time we spent
I told her I was in love, she chuckled a bit and said
‘Please, next week it’ll be someone else’
But she just didn’t understand the love we felt”

For those who don’t pay attention closely, the entire tale of heartbreak can seem unrelated to gaming at all, until at the very end Random mocks himself for doing “a cliched metaphorical rap song” in the vein of “I Used to Love H.E.R.” like Common. He can knock it if he wants to, but that doesn’t make the song less fresh. From there we move on to a tribute to Stevie Wonder on “Look Around” featuring Phil Harmonic, another silky smooth Marvin Gaye groove on “Work it Out,” and not surprisingly Michael Jackson and the entire Jackson fam get their props on “Twice Over (Heartbreak Remix),” noting how the day MJ died he was so heartbroken he didn’t feel like eating, performing or doing anything. All the while one of my favorite Jackson beats plays in the background – “I Can’t Help It,” the same song De La Soul jacked for “Breakadawn.” That’s one of the freshest things about “Heroes, Volume One” – even the interludes between songs keep the theme in tact and unlike so many hip-hop skits they’re really worth listening to.

As the album winds down we get Random’s final tributes, including a “Wings (Remix)” featuring Rufus Pipes that isn’t inspired by a soul artist in particular – it’s inspired by the events of September 11th and the people who were lost on that day. In this way Random expands the “Heroes” theme beyond just musicians to include personalities who inspired him over the years, including the late great Dr. Martin Luther King Jr., who you can hear sampled in the opening to the EOM produced “306.” We end “Heroes, Volume One” with two bonus tracks – “DJ Hero” featuring Int Eighty and Jermicide and “Eat Em Up” featuring The Movement Fam – possibly the album’s bounciest song and a tribute to LL Cool J in its own way. As is so often the case with Jarbo’s releases, whether as Random or Mega Ran, it’s hard to argue that his album isn’t worth more than what you paid for it… because you got it for FREE! That’s why if you download “Heroes, Volume One” and enjoy it I suggest you go out and support Ran when he comes on tour to a city near you. This is another fine edition to a long catalogue of quality material.