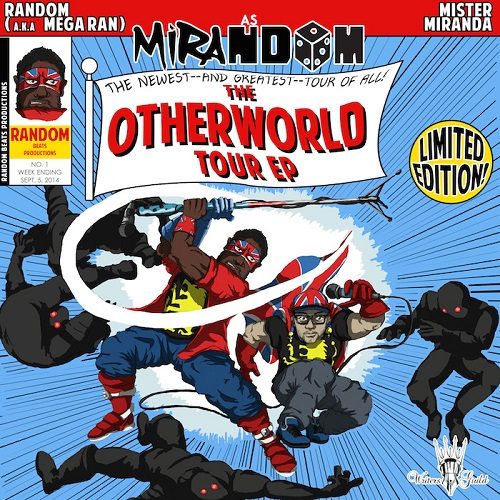 The last Mirandom album we reviewed was 2011, but it was far from the last Random album. If the Hip-Hop Hall of Fame ever has a wing for “Most Prolific and Still Dope Throughout” then Ran is on the first ballot. It’s not just that Random drops a half-dozen+ projects in any calendar year – it’s that you never hear one and think “Ehh.” He’s never been the average rapper anyway – he was wearing his nerd badge with pride long before every kid with a cell phone or tablet was playing Minecraft. He’s also not the average when it comes to the verbiage given that he’s a former teacher, something that comes across immediately on the Mirandom song “Lessons”:

Ran: “My best student didn’t even want to be in class
Mad smart, pulled in C’s, barely squeaking past
I noticed the dudes he put up in his path
Local gang signs in some graf like he tagged
So I asked if he was interested in art
Hoping a little involvement would get up in his heart
He said ‘Sometimes – my older brother he’s a beast though
Crazy with the pen, but he be up in the streets doe…'”

Unfortunately for our protagonist (and often society in general) even the teachers with the best intentions can’t always steer wayward youth back to a safer path. The “Otherworld” EP isn’t strictly about Ran though – he’s got an interesting partner in Miranda who vibes with him on a spiritual and lyrical level – someone Random happily describes in press releases as “my brother from another (mother).” It only makes sense that the two of them would tour together, or that an EP like “Otherworld” in support of said tour would be the result. Random and Mr. Miranda bounced all around the United Kingdom and Europe performing their solo work as well as EP tracks like “We On It!”

Miranda: “Fresh off of that red eye, gettin fly
But I’m still +Notorious+ like the king of Bed-Stuy
Talkin tough you get smacked kid – the rap game
is like Tom Hanks, everybody wanna act +Big+
Out of control like the ’96 Pac
Yo I’m goin for the +Gusto+ sorta like Chris Rock
Man there’s more to life than tryin to pull a honey for her looks
My cousin’s locked up, I’m puttin money on his books”

At just over 30 minutes total the “Otherworld” EP is almost over before it begins, but it doesn’t lack for quality in that all too short amount of time. The like-minded emcees of the Writers Guild collective join in for the posse track “Hold Tight,” Angelique White adds her distinctive crooning to Random and Miranda’s complex raps on “Lucid Dreamer” (which has an odd 38 second silence at the end – maybe to form our own lucid dreams with) and although “Last Words” isn’t the last track it’s got enough boom bap that it would have been a fitting end to the release.

Random’s whole goal is to “pass words to the listener’s ear” to “bless the listener’s ear/I pray you listening clear” – and Mr. Miranda is equal to that task as Ran’s tag team partner (something he may know a bit about given his Ultimate Warrior references). It’s a short but satisfying experience that’s only $5 from Bandcamp – less than a foot long sandwich plus tax from Subway. One will feed your stomach for a little bit, but this music will feed your ears over and over again for years.