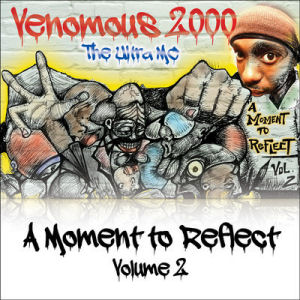 Venomous2000 The Ultra Emcee :: A Moment to Reflect II

It’s extremely difficult for me to review work by new artists-particularly those who I haven’t heard anything from at all in the past. There is that rare 10% chance that what I hear will blow my mind… and this happens to be one of those cases. Enter Passaic, New Jersey’s own Venomous2000 the Ultra Emcee, who possesses all of the qualities and historical knowhow necessary to become one of Hip-Hop’s most well-renowned artists. His new compilation “A Moment to Reflect II” is a vast compendium of his work. One of the few faults of this album might be its length-over the course of 31 songs, “A Moment to Reflect II” bears more resemblance to an iTunes playlist than a mixtape or album. It’s extremely difficult for us ADD Generation kids to pay attention. However, the flipside of that coin is the cornucopia of quality material to be found within the work.

Though a good chunk of the album’s tracks include such underground luminaries as Fes Taylor, L.I.F.E.LONG, and John Robinson (who drops a verse on the fantastic “The Most Efficient” alongside CyMarshall Law and Artifacts alum El da Sensei), the best songs here find Venomous solo: the leadoff “Raw Planted”; the crowd rocker “It’s On Tonight” (which includes an infectious breakbeat-backed instrumental from DJ Irs); “Let’s Do It Again,” where DJ Priority provides a soulful loop for Venomous to flex over; and “As the Beat and the Rhymes Go On,” where he laments the current state of ageism in Hip-Hop:

“It’ll be a sad day when I
decide to step away and put away the M-I-
C I deal with like minds that can’t picture something else
So they grow old with flows and enjoy they self
Music always felt so why care about the age of it?
Better get it straight cuz I’m the wrong one to tangle with
Ankles to the hips, you should watch where the hittin’ is
For this, my mass you need to build a bigger bridge
Sick of kids don’t even give props to a pioneer
True you ain’t gotta really like ’em but that’s why I’m here”

The production on the compilation, though coming from a varying array of producers, is extremely solid. They all tend to relay the same respect for the old school aesthetic as Visionary’s rhymes do. He hops behind the boards himself on a couple of selections, including “And Sometimes,” where his hook trades back-and-forth with a soulful vocal sample. It’s as if he lives by those same Biggie lyrics (“Old school, new school need to learn though”) that inform the nostalgia that narrates so many of the pure emcees of his era.

Though the subject matter can get a bit repetitive over 31 songs, Visionary has a great voice to listen to, as well as a naturally gifted cadence: his flow reminds me a bit of North Carolina’s Supastition: he’s got a voice that’s a bit higher in the register that still attacks with the same effectiveness and ferocity, particularly when he’s protecting the music that he loves so much. He’s at his finest on the aforementioned “And Sometimes,” where he delves into more globally conscious territory and wanders outside of the realm of America’s hip-hop industry.

Though the sheer size of the project is a bit much to comprehend after the first couple of listens, there is more than enough here to justify the $10.99 price of admission. Venomous2000 is easily the best (relatively-well, to me at least) emcee whose project I’ve come across in my time at RapReviews, and I can’t wait to hear what he’s got in store next.