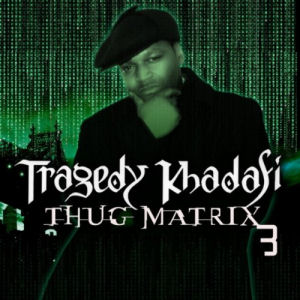 Tragedy Khadafi serves as a great example as an emcee who is able to change with the times without compromising his music. As a member of the Juice Crew, Tragedy released his debut “Intelligent Hoodlum” in 1990. “Tragedy: Saga of a Hoodlum” followed in 1993 and would be the last formal album Tragedy would drop for close to a decade. Rather than fade into obscurity, Tragedy chose to adapt to the changing climate and started releasing albums independently. With his independent spirit, Tragedy has experienced a career renaissance that has made him one of the most relevant members of the Juice Crew in today’s rap game. His latest album, “Thug Matrix 3,” serves as further proof of his adaptability as it is billed a “street album” meant to holdover his core fans before the release of his “official album.”

The term “street album” can lead to confusion for fans. Sometimes used interchangeably with “mixtape,” it seems that the term takes on whatever meaning one wants to give it. In Tragedy’s case, “Thug Matrix 3” has no re-used beats or freestyles, so it has the sound and feel of a “regular” album. The street aspect of the album comes from Tragedy’s rhymes, which have always been grounded in the street lifestyle. This album is no different with every track dealing with the streets in one way or another. “Narcotic Lines” gets things started with Tragedy spitting about the effects of the drug trade over a hard AraabMUSIK piano beat. With Tragedy’s one track mind, the beats really do the most to make tracks standout here. The Audible Doctor produced “Outstanding” is one of the gems as a soulful vocal sample is pitched down just enough to give the track a haunting warmth that is perfect for Tragedy’s rhyme style:

“Thieves in the hallway, its armed robbery
Verbally, it’s all part of me, the flow godly
Blunt money off the books, alive jukes
At the roundtable masterminding with live crooks
If the slug pierce my skull before I see em
Make sure the hood salute me for these words I leave em
Let it be known, by any means niggas is bleeding
Right til the casket drop, as long as I’m breathing”

The Ayatollah produced “Black Prince” features a lo-fi beat that mixes a subdued vocal sample with repeating pianos and bass. Tragedy uses the dark beat well with his unique mixture of street and 5% ideology:

“Yo, Ho-Tep, I stalked in the mountains while you slept
Government tried to neutralize me because I’m a threat
Lift the glass, black gloves and black mask
First and the last, from the lost tribe of Shabazz
King Tut flood the necklace, your mind’s reckless
Game’s watered down, plus the youth got a death wish
Knowledge is one, more symbolic to the sun
Golden gun, Swahili tongue, this is where I’m from
Combat jack, infinite spit, twitter my shit
Blog the god, myspace the face, more hits
Exotic hood, my raw shit, til I lay in the coffin
Skype Fidel Castro, I been with him often
Streets is graveyards, watch the seeds get lost in
Resurrect my doctrine, revolution is locked in
Cut off oxygen, octopus top is poppin
Twenty three million fans, youthful land
In the booth I go hand to hand, Arabian sands
Snatch you like heroin hands, foul grands”

“Free Thinkers” is another noteworthy track as Shroom comes through with another emotional vocal sample that gives the track a sorrowful feel. Here, the rhymes are more clearly focused on social issues as everything from the Jena 6 to Mumia’s prison sentence gets addressed.

Overall, “Thug Matrix 3” is a solid collection of street oriented, conscious raps that should holdover hardcore fans until the “official” album drops. About half of the tracks here rise above the average, both thematically and musically, and are the real gems of the album. The rest of the songs are solid, but unspectacular, takes on themes that Tragedy Khadafi fans are surely familiar with. Though Tragedy certainly possesses one of the more compelling rhyme styles coming out of NYC, his lack of focus is the only shortcoming found on this album. With verses and hooks that are essentially interchangeable on the less focused tracks, songs tend to blend in with each other. That said, an unfocused Tragedy Khadafi still hits hard and this album serves as a quality precursor for the forthcoming “Still Reportin.”