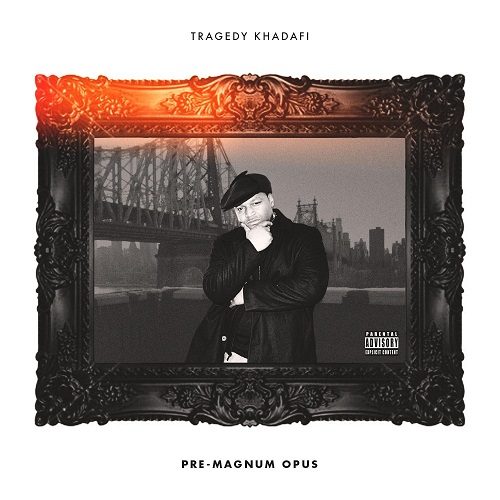 With no Nas album on the radar, Tragedy Khadafi’s latest project could well be the next best thing. Or at least, it starts out that way. That’s not to sleight Tragedy’s status, as it’s undoubted he is a Queensbridge veteran and a legendary rapper in his own right, but listening to “Pre-Magnum Opus” also highlights how much Nasir Jones’ voice is missed.

The opening track “Free Thinkers 2” is a fierce start to what is an intense, dark listen and it’s clear Tragedy remains firmly entrenched in Nasty Nas mode – this is grimy, underground Hip-Hop where morbid, horrorcore production takes precedence. Despite personally feeling tired of this sub-section of the genre, the reason I still check out Tragedy’s projects is because he continues to sound hungry. Many emcees whose careers stretch back nearly thirty years sound jaded and out of place in the current rap climate, but not Tragedy Khadafi.

Your enjoyment of Tragedy’s latest will depend on how tired you are of New York street rap, as the ten tracks on offer here rarely let up from brutal, often illegal narratives. If you enjoy the music from any of the guests (Illa Ghee, Royal Flush, Meyhem Lauren, M.O.P.) then you’ll know what to expect, but it also holds back Tragedy from stamping his foot down on his own record. The best tracks are the ones where he is left alone, and they are coincidentally the better produced ones also. The aforementioned “Free Thinkers 2”, “Runnin'” and “Mental Journey” are all crisp, satisfying tracks showcasing Tragedy’s ability to make generic thug activities sound poetic.

Along with “Stand Up” (a bombastic anthem featuring M.O.P.’s Lil Fame), the first half of “Pre-Magnum Opus” is surprisingly consistent, particularly the production. The second half is where the project falters, as various guests don’t really add anything extra to the tracks. At times, it confirms that a talented emcee, when given a few minutes to wax lyrical about street life, is infinitely superior to a selection of talented emcees doing the same. “Verbal Cannibals” (featuring Foul Monday, Shabaam Sahdeeq and Meyhem Lauren) and “Lazarus Pit” (featuring Royal Flush and Starvin B) highlight this, boasting strong line-ups but ultimately similar-sounding deliveries. It’s rare that it works (The UN being one example), and more often than not ends up nearer forgettable street rap, rather than classic posse cuts.

By the time “Suffer” closes out the album (or is it a mixtape?), initial optimism is suppressed and it’s largely because Tragedy isn’t spitting as often as he should be. As one of few people who believes Tragedy still hasn’t recorded his best work, it’s disappointing and I’m hoping when the magnum opus does drop, it’s Tragedy Khadafi on his own.