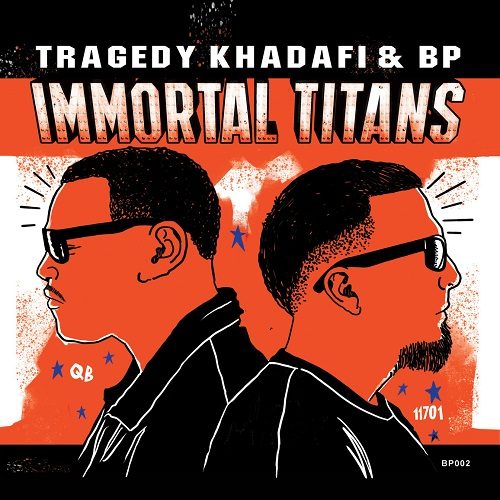 Percy Chapman has gone by many names – Jade-Ski, MC Jade, MC Percy, Tragedy, Intelligent Hoodlum, Khadafi, the Foul Mahdi, the Rebel, and a host of others depending on how thoroughly you comb through his discography (to draw a veil over the most ill-advised). He fused Tragedy and Khadafi during a career reboot in 1997, and he’s been Tragedy Khadafi ever since, incidentally surviving Libyan longtime autocrat Muammar al-Gaddafi. Another name stuck as well, perhaps not with him personally, but in rap music’s collective memory, how else would you explain that as recently as last year onetime New Orleans rap mogul Master P branded himself an “Intelligent Hoodlum” (via a mixtape of the same name)? The array of aliases is directly linked to his descriptive lyrical style, which he has depended on for a long time but can also come across a little bit too pronouncedly.

“Immortal Titans” is a collaboration with Amityville-based producer BP, with whom Tragedy has dealt before in his capacity as a member of the group Black Market Militia. The two are definitely on the same page as far as their brand of hip-hop goes, but the execution is not such that it would revitalize music that still seems to be reeling from the millennium bug that befell many a ‘serious’ and ‘underground’ rap act. On the musical side, the basic dilemma is that nominally ‘dramatic’ or ‘epic’ elements do not guarantee dramatic or epic rap tracks. BP picks, this much can be said, the right ingredients if he’s going for hip-hop that hopes to take the listener on an adventure. But the intended effect just doesn’t ensue. Treat your source material, the samples and instruments (sounds in general) well and you will be rewarded. Otherwise you’re making beats, but not music.

Tragedy Khadafi himself sounds emotionally charged on “Immortal Titans.” In the first song, he insists that his name be included in ‘Top 5 Dead or Alive’ debates and takes an “anti-commercial” stance against the “mainstream.” On the next track he describes himself as a “prototype,” adding, “They styles I basically fathered.” The demands for recognition continue, up to the point where he calls himself “the most underrated and the most ridiculed.” There’s always a chance that a rapper like Tragedy, wielding a mind sharpened by the code of the streets, the rhetoric of rap and black liberation theology, speaks not merely for himself but for a community that shares his experiences. It doesn’t quite come across like that on this project. A ‘We’ will primarily elicit a ‘Who?’ from the listener. Who is the ‘We’ in “We been the dons in this renaissance / I’m talkin’ that elite upper echelon”? One interpretation would be that what was originally supposed to be full Black Market Militia project is now a one-on-one.

Be that as it may, especially during the first half Tragedy Khadafi holds on to the aggrandizing language he’s specialized in simply too vehemently. He always lays it on thick. He’s nothing less than a “dinosaur” and “hall-of-famer.” This of course ties into the advanced Dunn Language (s–t’s official, it has its own Wikipedia entry) he helped coin (which is fond of phrasings like “most gracious,” “doctrine,” “salute the general,” “thug paradise,” and so on). But more than once Trag’s writtens sum up like throwaway verses from a Killah Priest or a Vinnie Paz.

That is… until he gets personal. The album becomes tangible after Connecticut MC Apathy is able to check one more box on his collaboration wish list with “Mastermind.” For “4 Her” Tragedy and BP devise a track that is split between harsh verses and a melancholic chorus with according beat changes. It is here that you begin to think about ‘the meaning of the name’ (word to Gang Starr) and might just come to the conclusion that if Khadafi is the title, Tragedy is the name. More expressively than his peers, Chapman carries his past with him, living up to his name not in a tragic way, but rather one that doesn’t brush over tragedy with triumph. Bitterly and with bewilderment, he lists odds he had to overcome in his life – “State prisons up in the mountains that couldn’t break me,” “some came in the form of women in relationships / others came by way of the serpent niggas on hatin’ shit.” Generations of emcees took the bitter with the sweet lyrically, but few have put as little pretense into it as Tragedy Khadafi:

“Beyond hip-hop and this rap s–t my story’s organic
As a child faced death and a murder and didn’t panic
Beyond music know my life story and overstand it
I made mistakes along my way, true, granted
Dealt the cards life dealt me, still on some upper-hand s–t
Khadaf’s life deeper than scribes written in Sanskrit
Mutated gambit, smackin you open handed
Concealed plans from demonic niggaz that are damaging
Black snake be the worst snake in the garden
And for God’s sake, I gave niggaz too many pardons
I done shed light only to receive back they darkness
And couldn’t find one of them, goin through all my hardships”

Longtime allies SmooVth, Rozewood and Hus Kingpin take an unflinching look at their past (criminal and otherwise) on “Renoir Repertoire,” but it’s the host who sets the bar lyrically with “Khadaf’ push it to the limit like the ‘Scarface’ theme song / But with more of a cause like Malcolm in the Audubon.” There’s the ‘Intelligent Hoodlum’ dichotomy again, something new school rappers like Rozewood readily bow down to: “Much respect to the Mahdi, god of the Queens borough.” Fittingly, a slice of classic New York street rap follows with “Talk to ‘Em.” “Story Never Told” takes us back before such a genre even existed as he recalls witnessing his breakthrough on producer Marley Marl’s “In Control, Volume 1” from behind bars and being duped by his mentor about his idea for a group called Lords of the Underground (which eventually came into existence featuring people with no relation to Trag).

“The World Is Mine” features a thoughtful hook by Ali Vegas as Tragedy clear-headedly puts forward his artistic obligations: “Can’t let go, even when the critics ridicule / what we livin’ through.” The final trio of tracks are anchored by childhood memories that again cast a light on his motivation. The songs themselves are distinguishable by their concepts, the only drawback being “Steady Rising” ending abruptly, creating a bit of an anticlimax. But that becomes a quibble compared to lasting impressions like the second verse of “The Great Escape,” where he details an ex-cons bleak prospects in best Queensbridge tradition.

While “Immortal Titans” starts out as a typical late-career perfuntory release, it steadily gains traction, and although producer BP reveals his inexperience in composing an album front to back, the final product isn’t nearly as bad as a random skimming could have you believe. Plagued by similar issues as his producer, Tragedy is an MC you really gotta listen to to realize what he has to offer. He could have gone the way of many a trailblazer and get lost in the shuffle himself, yet after all these years the self-described “product of the crack era” maintains focus, in a manner that his music comes to stand for something that is in essence a multigenerational matter: “I’m talkin’ legacies the seeds carry on.”