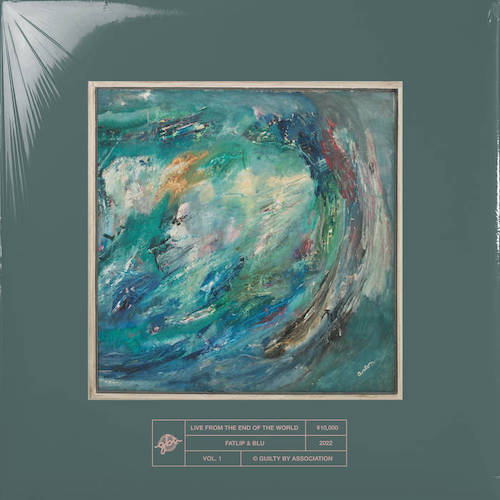 Live From the End of the World Vol. 1

There’s no reason for “Live From the End of the World Vol. 1 (Demos)” to have the word “Demos” attached to it. “Demo” is short for “demonstration” and in the music industry a “demo” was what you recorded and submitted to a record label in the hopes of getting a record deal. EPMD once rapped “Please Listen to My Demo” to immortalize the struggle they had trying to get anyone at a label to give them the time of day. De La Soul recorded “Ring Ring Ring (Ha Ha Hey)” to express their annoyance at being constantly hit up on the phone by rappers who wanted them to pass a demo to Tommy Boy Records. A “demo” album is presume by its very nature to be “the best you can do with limited resources.” You might not have access to anything better than a four track (if that) but you still intend to prove your worth, hoping some A&R will pick your demo out of the pile and realize that a diamond in the rough is worth polishing.

Neither Fatlip nor Blu are aspiring newcomers looking for their first big break in the music industry. The former has been on the rap scene since the early 1990’s when he broke in with The Pharcyde, while the latter got on in the early 2000’s and became a legend teaming with Exile on “Below the Heavens.” They’ve each had some gaps between projects, some short and some long, but I wouldn’t say either of them ever retired from rap music. They certainly don’t need to “demonstrate” anything to anyone. They’ve proved their credentials many times over. In fact a “demo” is an archaic antiquated concept at this point. You can put the equivalent of a full recording studio on a laptop computer, recording and mixing your own music, and get instant feedback uploading it to Soundcloud or YouTube. Getting signed to a major label still gives you some advantages compared to the DIY hustle, but you don’t need to hand someone a demo tape any more.

Furthermore when you’ve got the equally legendary Madlib working with you on tracks like “Gangsta Rap” it’s abundantly clear this is no demo. It’s yet another example of the dirty smooth soul we know Mr. Jackson for, what Ice-T once describe as “fried chicken” thanks to the crackling sound of the needle hitting the dusty grooves. This song doesn’t suffer for it — it’s enhanced BY it. You have to know the right time and place to let it be part of a song instead of trying to filter it out, and on this song everybody knows it belongs there. The only reason to call “Live From the End of the World Vol. 1 (Demos)” a demonstration would be in the most classical sense of the word. Everyone here is demonstrating how good they are at what they do.

In the span of just nine tracks clocking in under 30 minutes, Fatlip and Blu showcase their deep history in hip-hop and deep degree of connections in the music biz. Hemlock Ernst and Ras Kass rap on the GBA produced “Good For the Soul” (I can’t get over how much I like the scratches on the hook of this song), “Look to the Sky” features Chali 2na (Jurassic 5) and the late Gift of Gab, soul singer Bilal croons the hook of the Sa-Ra produced “Hollywood Celebrity,” and “Crack Party” is just ridiculously deep: Del the Funky Homosapien, J Ro (Tha Alkaholiks), Akil (Jurassic 5), Opio (Hieroglyphics) and Money B (Digital Underground). It’s almost criminal how extra it is!

I think it’s fair to say that “Live From the End of the World Vol. 1 (Demos)” is playing to my weaknesses as a rap fan and rap critic alike — thoughtfully produced rap with excellent beats, rhymes, samples and turntablism all under one roof. That’s good news though! If they designed a nearly perfect album that I didn’t hate listening to for 30 minutes, the odds are you’re not going to hate it either. I only say “nearly” for two reasons — at under a half hour this project just isn’t long enough, and with so many guests it doesn’t really give either Fatlip or Blu the focus they deserve. An entire album with just the two of them, produced by Madlib or any equally talented cat, would have been good enough for me. If this truly is a “demo” though maybe there’s still time for them to do that later on. Here’s hoping.