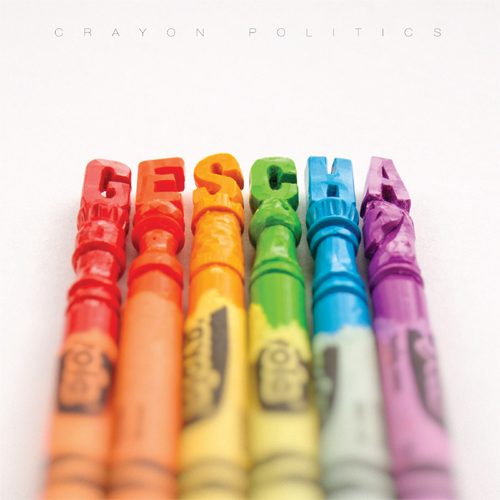 Gescha certainly doesn’t fit the profile of an average emcee. I’m no expert when it comes to Canadian hip-hop, but the Saskatoon, Saskatchewan native’s fair skin complexion and shoulder-length hair struck me at first as, well, rather odd for a rap artist. Knowing nothing else about Gescha, I dove into “Crayon Politics” with little idea of what to expect, and while I’m not usually one to judge a book by its cover, my expectations weren’t exactly through the roof. And after hearing the album’s lead single, “Love Pirates,” I wasn’t even sure if Gescha could be classified as hip-hop. With shimmering organ chords, a catchy bassline, a fast-paced drum-loop, and upbeat lyrics that combine to give the track more of a pop or dance feel than a hip-hop vibe, I couldn’t help but think that the track was built for the radio. While it is admittedly catchy, “Love Pirates” left me wondering whether “Crayon Politics” would be a little too mainstream-oriented for my liking.

As I cycled through a few other tracks on the album, though, I found that “Love Pirates” was somewhat of an anomaly, and “Crayon Politics” proved to have more depth than I initially expected. Right off the bat, it’s clear that Gescha understands his niche as an emcee and sticks to the formula that works best for him. As promised on the Bandcamp website, the album mixes traditional hip-hop with “experimental instrumentation and unique vocals,” creating an original and refreshing sound that doesn’t hesitate to push the boundaries of the genre. And when it comes to vocals, Gescha doesn’t disappoint, as his versatility as an artist allows him to mix rapping with a more drawn-out, almost sing-song flow on a number of tracks. What’s more, his carefree, laid-back delivery, combined with the authentic and upbeat feel of the live instrumentation, makes for an enjoyable listen that’s easy on the ears throughout.

The variety of tracks found on “Crayon Politics” is impressive, and there is truly something for everyone, as the album contains elements of jazz, electronic, and soul music in addition to hip-hop. The album’s opening track, “Go,” pits a fast-paced drum loop atop electric piano keys and a funky bassline, complemented by background vocals from an unnamed female artist, and Gescha is able to match the flow of the beat with a delivery that remains steady from beginning to end. Then there’s the title track â€“arguably one the most complete and polished instrumentals on the album — which features jazzy synths and crooning vocals on the chorus from Tom Pickett. “One Summer” also has a smooth feel, with steady drum beat over a rolling bassline and soft piano keys and violin strings, as Gescha displays his knack for storytelling as he spins a tale of summer romance come and gone. And then there’s “Slow Build,” which has more positive vibe, with a catchy acoustic guitar loop that sounds like it’s straight out of a country song, and features guest artist Moka Only.

There are certainly a number of feel-good tracks, but Gescha’s lyrics aren’t always as lighthearted, as several songs deal with deeper, more personal issues in his life. “The Wind,” a piano-driven, head-bobbing track that has a more somber feel than most songs on the album, sees Gescha open up with heartfelt lyrics about his father. “My Streets Dreaming,” on the other hand, has somewhat of a soulful, old-school feel, complete with a soft jazzy trumpet sample, as he paints a picture of the struggle and hustle many people endure in order to reach their dreams. Even on these tracks, though, Gescha’s easygoing delivery keeps things from growing too sorrowful or dreary, and the introspective lyricism offers a nice contrast to some of the more upbeat tracks on the album.

Overall, fans looking for something that’s outside the normal boundaries of hip-hop should not hesitate to check out “Crayon Politics,” which sees Gescha display his versatility as an artist over a mix of live instrumentation and a variety of samples. Those who favor traditional rap may be a little off-put by some of the more experimental songs, but top to bottom, it’s difficult to point to a track where Gescha falters as an emcee, as he is able to adapt his flow to each instrumental accordingly. What really makes the album interesting throughout, though, is the wide range of tracks that includes everything from the party-happy “Love Pirates” to the downbeat “The Wind.” It’s hard to deny that the album has a certain catchiness to it, and if you come in with an open mind and give the “Crayon Politics” a chance, you’ll find yourself grooving to Gescha’s rhymes, making for an entertaining listen and a promising debut from the up-and-coming 24-year-old artist from Saskatoon.