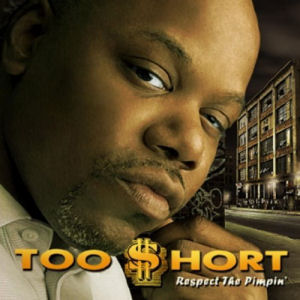 Too $hort :: Respect the Pimpin’

As both a rap critic and a long-time Todd Shaw advocate, “Still Blowin'” was difficult to listen to. Even though it would not be the first time in his long and illustrious career that Too $hort would be accused of recycling themes and concepts of his prior pimpology, it would arguably be the first time in his career where hip-hop’s #1 mack no longer believed his own pimp game. The beats were depressing and the lyrics even moreso. Everything about the album screamed that a past-his-prime rap legend was simply going through the motions to put out another album for the fans who would still buy it. Nobody wants to see an all-time hip-hop great go out like that.

Thankfully “Respect the Pimpin'” can rub off a little of the tarnish from Too $hort’s last release and give the East Oakland alum some more shine. Like his previous effort, this one is only available digitally, although it’s a smaller release at just six tracks and priced affordably to go along with that. One gets the sense from the shorter length (running time 23:37) that Sir Too $hort decided to win his fans back with a shorter, more focused effort that revealed the strengths of his pimpin’ and not the weaknesses. As such he comes out a winner right from the opening track “Bitch I’m a Pimp.” The music is pure “Shaft” and the drawl on the chorus could either be East Oakland or South Texas, but either way the “peee-yimp” pronunciation emphasizes just how raw and unadulterated the song is.

“Trick nigga you don’t ball like this
Holdin hands at the mall with a bitch
Shoppin spree and everythang’s on you
But don’t tell the bitch what you ain’t gon’ do
Cause she gon’ check you, disrespect you
All she gotta say is, ‘I want that too’
You know love gets better with time
And yo’ credit cards don’t never decline
Keep swipin, don’t stop it
It ain’t trickin if you got it
You think she earned it mane?
Listen real close nigga learn some game”

Classic, unapologetic, and yes misogynistic hip-hop from Too $hort. In the current economic climate it could even be considered a vital lesson in how to protect your assets. Speaking of assets, Mr. Shaw must have realized he didn’t provide enough big guests last time around, because this time he enrolls Snoop Dogg for the title track.

Big Snoop: “All I wanna be is well known now
Drive a ‘llac, big mack and do my own style
Keep a freak, on the street, that fit the profile
At the pad, money stack, watchin dough pile
Reminiscin of a player that I once knew
He had it all, went broke, but he still kept it true
Bounced back, like a real mack, got a new sack
New hoes, new clothes, and found a new track
Now that’s a player that I always wanna be like
Did dirt, went to church and lived the street life
Ask $hort, ask Snoop, we gon’ tell you the truth
A real pimp, keep a prostitute, and she get lots of loot”

That’s not the only song with cameos though – Jazze Pha sings the hook on “That’s Not Your Bitch,” which he also produced along with “Bitches Need Love Too.” You can also hear fellow California pimp legends Richie Rich and Mac Minister on “Ya’ll Ready,” although how the latter appeared is a bit of a mystery given he’s currently serving a life sentence without the possibility of parole. Since I have no explanation for it there’s no reason to dwell on it – it is what it is. It won’t be redemption for the Minister, who has to find that in his own way on his own time, but it definitely is for Too $hort. The six tracks here have a funky heart and soul that was lacking on his last album, and by sharing the spotlight with a few other well knowns it makes even his completely solo songs sound re-energized. This might be the new formula for Shorty the Pimp from here on out – shorter EP’s with a higher concentration of dopeness than long LP’s. Let’s hope so.