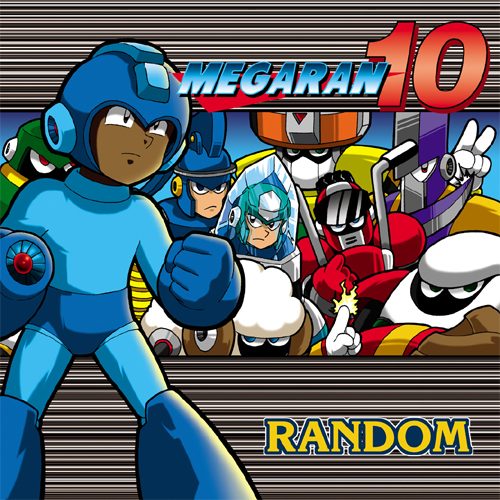 The following disclaimer needs to be given before continuing – this is NOT the full length “Mega Ran 10” that will be coming out on November 11th, 2011 (yes that’s 11/11/11 for all of you numerologists out there). What we have here is an eight track pre-order pack given to those who put down for either the limited edition blue vinyl, the autographed poster album package, or the straight up digital-only release. Obviously those are scaled from increased to decreased cost, with the digital being only $8 (minimum), so if you’re planning to buy after this review the one you choose either reflects the funds you have in your wallet or how much of a Mega Ran fan you already are – possibly both.

If you’ve heard the previously released Mega Ran albums there’s probably not much question of you being a fan. Even those who have never played Capcom’s series of Mega Man games, of which there are numerous volumes spread over multiple consoles, could still appreciate the straight up storytelling and rap rhyming ability of Random. For the already talented Raheem Jarbo, who was first introduced to RR readers on “The Call,” combining his love of hip-hop and video games opened him up to a whole new audience who may not initially have been rap fans. One can only imagine if they stuck with him after that for releases like “Heroes, Volume One they soon learned he’s more than just a video game rhymer – he’s a versatile artist with a tremendous range of material he can write and rip raps about.

Still it’s hard to ignore the fact Capcom keeps on releasing more and more Mega Man games, and a fan base of millions eagerly awaits each installment and is quick to download and play them when they arrive. Let’s be clear here – Random proved himself as an emcee before the video game rap niche blew up over night – and if Mega Man games inexplicably fell out of fashion he’d still be a successful hip-hop artist. That said it’s undeniably true that Random loves this. He not only gets a kick out of rapping about video games, he gets more of one out of rapping about his FAVORITE games. What truly sets the “Mega Ran” series of albums apart though is how he tries to directly incorporate the storyline of the game itself into the verses he’s spitting. For example the Roboenza virus which is causing robots in Mega Man 10 to get sick and then go on a rampage is the story of “Sick!!!”

“I’m under the influence of, somethin worse than influenza
Got all the symptoms – sore throat, achy joints, clammy hands
Dry cough, fever, somebody call the ambulance
I’m up all night, tossin like a dryer load
Sweatin like I’m at a club that violated fire code
Crypto-sporid-e-o-sis
These days I’m too debilitated to focus
Hope this, blows over expeditiously
It’s attackin me viciously
I got people to save, but nobody to save me”

Successful Mega Ran songs don’t just incorporate the themes of the games but also the 8-bit soundtracks that go along with them. From the point of view of the listener this can either be a strength or a weakness. Not every tune in a Mega Man game will go down as an all-time classic, yet some of them are so catchy you’ll find yourself humming them days later for no apparent reason. Having played the game at length I can tell you Mega Man 10 falls somewhere in between the two, and is not one of the strongest entries in the series in terms of its soundtrack. Thankfully Random and his friends like K-Murdock beef up the game’s music with strong drum beats, making songs like “Easy Mode” hit harder than they could have otherwise, and of course the lyrics are on point:

“Since I was half of the man that I am
I’ve dreamed of stackin the Grammys
Flash at ’em at bad rappers that never mastered the plan
In back of the van, my product wrapped in cellophane
Rap’s letterman, breeze through your weather vanes
Like I was supposed to rot in a cell
Bitch I could prevail before Oprah was rockin Michelle
Then my college advisor said life ain’t gotta try to surprise ya
No time to let astrology guide ya
So I’m in overdrive, underrated but overjoyed
Understatement of the year, I +Tell ‘Em+, no +Soulja Boy+”

Random also employs guests on the tracks available on this pre-order, including Wordspit on the above quoted track, and Adam WarRock on one of the best tracks “Pump It Up!” The song with Storyville “Next Level” is pretty tight too, spit at a triple rhyme rapid pace, although the beat isn’t as strong as the other songs. Ironically the one song that seems to be the least well executed is the only one released as an Amazon single, and that’s “Ten.” No offense to whoever produced it but the beat is a jumbled pile thrown on top of the melody that almost immediately makes Ran sound like he’s flowing off beat, and not in a good way. I hope this song is remastered before the final release. It’s also curious that one of the tracks in the pre-release pack is simply an acapella of “Pump It Up!” That’s great if you are a remixer, but disappointing if you were hoping for one more original song. “Mega Ran 10” is off to a good start, but keep an eye out for the full LP.