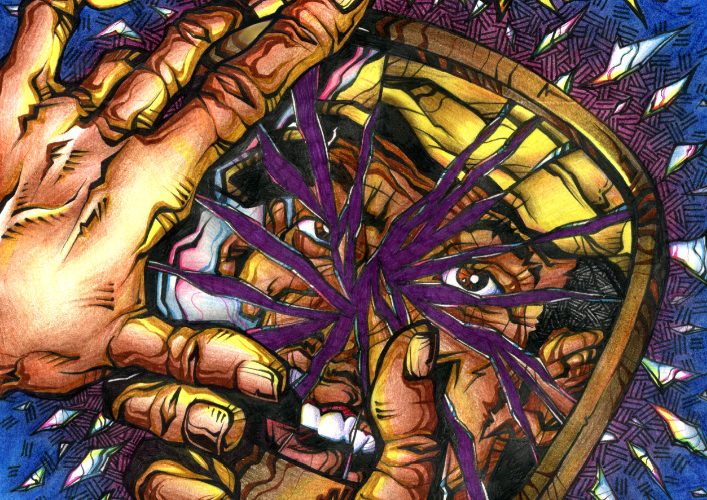 When Arrested Development named their platinum-selling debut “3 Years, 5 Months and 2 Days in the Life of…”, they literally summed up the time it took them to cut a deal after they first decided to start looking for one. It took rapper Supastition twice the time to finally release his first full-length “7 Years of Bad Luck”. In those seven years, the North Carolina MC did more than a few of the extra laps that are part of a solid rap career. A career that started out humble as usual, when three boys wrote their own rhymes to Doug E. Fresh & MC Ricky D’s “The Show”, but took a bold leap forward when he headed out to New Jersey in 11th grade to record a demo with a few friends after reading something in The Source about producers looking for artists.

Then known as Xtinct MC, he did the local thing as a member of the Southern Slang Thang Coalition. With an updated demo and a name change to Blackmel, he landed a deal with Lo Key Records run by veteran Queens DJ/producer Davy D (of “One for the Treble” fame). Ready to drop his debut “First Impressionz” since 1997, he eventually got tired of waiting and moved on, hooked up with fellow North Carolinians The Nobodies, appeared on their “Now Culture” album and Esau’s “The Debut Album…The Farewell Tour” guest-starring on “Esau Vs Blackmel” and the posse track “2 Many Emcees”, where he dropped the telling line “I got split personalities and got ’em all solo deals.” After recording yet another demo, Cali Agent Rasco offered him a single deal on his Pockets Linted imprint. Finally, in the summer of 2002, he is ready to drop his debut album on Freshchest Records, under an alias that links the name of his album to a famous Stevie Wonder song. Presenting: “7 Years of Bad Luck” by Supastition.

Clearly hoping for (at least) seven years of good luck, Supastition still makes his run of bad luck the topic of his rhymes. And why should he not, after all, experience makes the difference between a real MC and one who just plays one on TV. In “Hip Hop Vs Life” Supa talks about how his aspiration to be an artist collides with the real world:

“I can’t put that I’m a rapper on a job application
I’d get laughed at, especially when they ask how much I made
it’s straight commission work, meaning you don’t sell, you don’t get paid
Since I don’t rap for the money they pay me with blank checks
and they already said I’m ignorant, so what will they think next?
So everything I ever felt in life gets placed in a rhyme
and even my friends be lookin’ at me like I’m wastin’ my time
but I don’t wanna spend the rest of my life workin’ in a factory
and sendin’ tapes off to record spots that don’t get back to me
Never knowin’ my limits, drivin’ a ’95 Plymouth
that don’t wanna start up, it could fall apart at any minute
tryin’ to make my daughter see that I can’t be there every day
and understand it’s kinda hard when daddy’s four hours away
To top it all off, 9 out of 10 people say I’m real dope
in actuality I’m still broke”

The hardships of the independent underground rapper also surface in “Da Waiting Period”, where he concludes: “When you’re broke, you gotta do it for the love of it.” Not susprisingly, “7 Years of Bad Luck” is born out of that very love. As the struggling rapper sobb story comes to an end, Supastition fills up his ink pad, gets his animated delivery in gear and drops a well-rounded album. With a knack for delivering punchlines in a multi-syllable rhyme structure, Supastition lets everyone know why he’s a feared opponent.

Strictly flexing his skills, Supastition spars with a punching beat courtesy of Hood on “Live Like DAT”. Over one of those drumloops that never go out of style, he takes no prisoners on the Freshchest Prose-produced “ThatzMuzik”. His battle rhymer persona peaks in “Crown Me!!!” where he seeks to solidify his his rep as “the illest metaphor rhymer.” Mixing a Molotov cocktail of disses, political statements and 100% proof bragging, Supastition drops the proverbial bomb with lines like “I’ll be damned if I coward out or walk around on egg shells / I karate-kick you continuously until my leg swells,” “a 21 gun salute for everyone who embrace rap / but I’m sick of seeing people paint they lips white and they face black” and “Supastition spit rapid fire, think I’m abusing my lungs / I’m sicker than kissing your little kids and using your tongue.” If he wants to, he can definitely “cause more beef than a Alchemist track.”

But there’s more to Supastition than verbal rah-rah. Using his gift for imaginative writing, he broadens the spectrum of his songs considerably. “Best of Life” and “Mixed Emotionz” (the former addressing his parents, the latter his baby mama) are so subtle in the emotions expressed, it’s evident that Supastition can be as honest as he can be personal. “Fallen Star” traces three individual destinies, two of which end in suicide (a young girl with lack of self-esteem, an army guy who can’t adopt to civilian life). In contrast, “Celebration of Life” is just that, albeit with a hip-hop twist. The rapper has a dream where he finds himself in a “heaven for people of music,” similar to 2Pac’s “I Ain’t Mad at Cha” video:

“…with beats bangin’ out the speakers too hot to stop
on the turntables I saw Subroc and Scott La Rock
feelin’ out of my mind I broke into a dance like a b-boy
and lost focus when I saw the moves of Trouble T-Roy
I begin to think about the way we’re livin’ foul and destroy
somebody else’s life, cause we don’t hardly ever see joy
I’m walkin’ around shakin’ hands with everybody famous
at the same time I’m thinkin’, yo, where in the hell my name is
The music dropped, turned around and everybody stopped
sayin’: you can never die when you live for hip-hop”

Speaking of dreams, “Dreamland” has Supastition imagining what it’d be like to be a millionaire. For instance, he couldn’t see himself rapping anymore. But for now he’s still out for that special type of credit: “I don’t really need a million dollars like I said I do / cause all I really want is y’all to give credit where credit’s due.” Credit is definitely due for a song like “Body Language”, which mentions at least one body part in each line. From… “Body Language’s just the language I speak, better yet freak / until a beautiful record label come and sweep me off my feet” to… “On the third leg of the tour I chin-check women at shows / bitch, you don’t need a plastic surgeon, just keep turnin’ up your nose.”

With such a vast reservoir of ideas, Supastition may be too much to handle for the music industry and once again it would be our loss that a talentend MC dwells forever in the dark dungeons of underground rap. But seeing as how he possesses a lot of the qualities that originally got many of today’s stars their addmittance into the game, Supastition might very well be in for seven years of good luck.