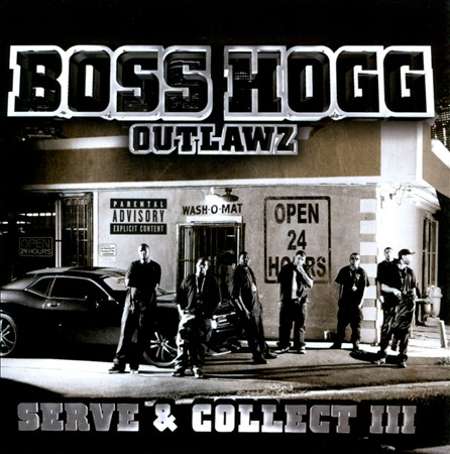 Houston rapper Slim Thug and his crew ofBoss Hogg Outlawzhave been repping Texas for over 10 years now, but rose to prominence around 2004-2005 when Thug’s solo career skyrocketed off hits like “3 Kings” and “Like a Boss.” The size and membership of the crew have changed over the years, but the 2011 roster according to the liner notes of “Serve & Collect III” is as follows: Slim Thug, Dre Day, Le$, Lil Ray, J-Dawg, Mug and Black. They’ve combined forces to drop 73 minutes of music on the E1 imprint, their first group album since “Serve & Collect II” back in 2008.

Rather than try to understand what happened to BHO cohorts like Killa Kyleon and Chris Ward, it’s probably best to put it the way writer DJ Complejo did some years back: “Slim Thug is and will always remain the leader and the best rapper out of all the Boss Hogg Outlawz. At the very least, the rest of the crew provides some variety.” It should come as no surprise then on “Serve & Collect III” that hip-hop’s #1 Thugga stars on 14 out of 16 tracks. It’s tempting to say the 2 that he’s not on are skippable, but that’s not entirely true. “Roofless” has a pounding and synth-heavy Mr. Lee beat that carries the extensive variety of guests artists on a five minute+ posse cut nicely. While “Get It” is a nice mellow tune from RayFace, this one is less forgivable – it’s WAY TOO LONG at over 7 minutes long. At just over 4, it would have been a dope cut. As for Thug his self-professed “real nigga shit” hasn’t changed much, but that’s far from a bad thing:

“What it do H-Town? We came to rep
And keep this gangsta shit alive until I see my death
I could talk about hoes, could talk about stuntin
But I’ma take this time to go an’ keep it 100
A lot of niggaz used to be down but now they gone
I wish you nuttin but success, nigga get ya shine on
It ain’t about the money, it’s mo’ about the love
I appreciate every nigga reppin for Slim Thug
Since back in nine-eight, y’all niggaz had my back
Bought every CD, spittin ’em track for track
Keepin my shows packed so I gotta go hard
and hold it down for my town and my Outlaw squad”

The biggest drawback of “Serve & Collect III” may be that the other members of the crew water the potency of his raps down, and while BHO J-Dawg comes off as a star in terms of personality and flow, he’s not near the lyricist or storyteller that Thug is. With such an overwhelmingly mixed bag of raps on this album, it’s up to the producers and their beats to save the songs and keep things moving – sometimes they do, sometimes they don’t. The venerable Mr. Lee is behind most of the album’s best tracks including the Geto Boys reminiscent “Anybody Can Get It,” the funk bluesy guitar licks of “Shut Yo Hood Down” and hard bumping ode to sex and money “If I Don’t.” “G Luck” is hit and miss. “Concrete” is as hard as its name, but feels like a generic Southern mixtape song. “Bang” counts on the sound of gunfire to make up for a lack of melody – it doesn’t. “Turn My Knock Up” on the other hand embraces a minimalism that really helps the bass and beat hit the trunk hard.

To bottom line this presentation “Serve & Collect III” is another reminder of why Slim Thug’s potent “Nawfside” accent and mannish vocal tone are so pleasing to the ear when presented over the right beats, and why so many other rappers can eat off his plate because he stands out in a crowded musical field. While the Boss Hogg Outlawz might have some potential as soloists if they broke out on their own like J-Dawg did, in the confines of the group they’re all tied for second place behind the Thugga, and not one rises upward to the top. If you’re a Slim Thug fan and can wait between the other members for his verses, this one is recommended, otherwise wait for his next CD.