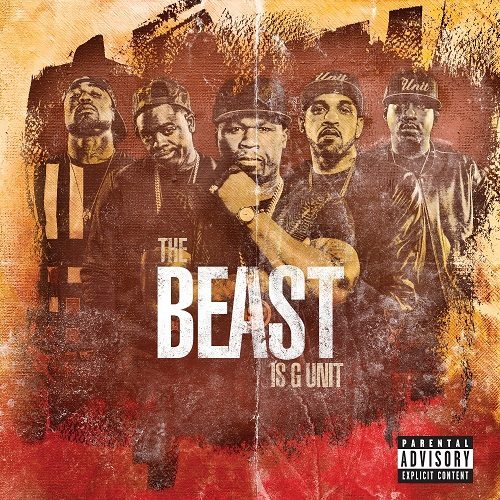 The first twenty seconds of this EP may turn off many G-Unit fans – nobody needs an auto-tuned 50 Cent, not even a rap group that’s struggling to remain relevant. The problem with “The Beast Is G-Unit” is that it sounds more like a D-Block mixtape than it does a G-Unit EP. A G-Unit/LOX combination would be interesting, but considering the underwhelming response to The LOX’s EP in 2014, it does feel like this update on early 2000s Hip Hop is falling on deaf ears.

G-Unit are no longer the force they once were, and opening track “Ballin'” sounds nothing like a G-Unit song. This is where the EP struggles to remain interesting, because it sees G-Unit jumping between different sounds, which on a 6-song long record is hard to forgive.

“I’m Grown” sees Lloyd Banks and Tony Yayo claiming they are grown men, because they are rich. It’s a fair statement, and Fiddy does deliver a solid verse, but the overbearing “money gets bitches” philosophy is anything but “grown”. Granted, nobody is taking life lessons from G-Unit, but it’s dumb to claim that because you’re rich enough to own something, it makes you grown up. Young Buck fares better on “Bring My Bottles”, because he doesn’t take himself too seriously when he rants “Please can you bring my bottles to my booth”. The fact he says ‘please’ to these ‘bitches’ is a nice touch, and it doesn’t hurt that the track benefits from a rip-roaring production (including sinister pianos which I always associate with the Unit since “Poppin’ Them Thangs”).

Two words end up being the primary reason for even bothering with a G-Unit record in 2015: Lloyd Banks. His charismatic presence on “Doper Than My Last One” defies the rest of the EP’s one-dimensional tactics and identity-posing southern sound (Young Buck excluded). It’s easily the most New York sounding track on here, and Banks’ flow is vicious, proving that with the right production, Banks is the star of the group. Unfortunately, Banks’ statement of “I sound like where I’m from, don’t gotta freeload off a region” doesn’t apply to the half of the record, including tracks he spits on.

If G-Unit are to keep their fans happy, while bringing in new ones, they need to make a decision on the latter part of their career. Stick to your hardcore roots, much like what Mobb Deep, M.O.P. and The LOX have done, or embrace the popular sound and hit DJ Mustard up for a single. A half-assed impersonation of another area’s sound for half of an EP before reverting back to their traditional sound is confusing for the listener, as well as a good way to split fans opinions.