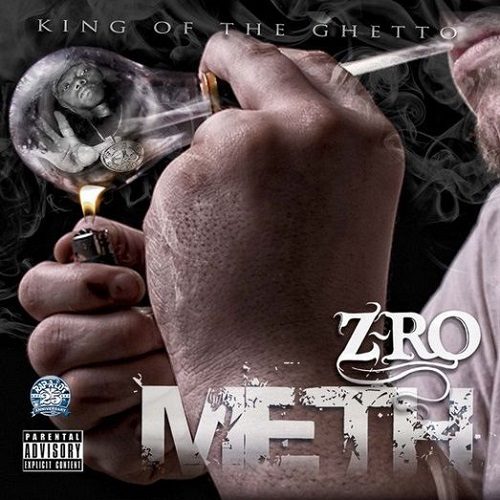 Z-Ro opens his latest record “Meth” by stating, “That’s right nigga – changed my name to Rother Vandross – fuck you old punk ass nigga, nigga!” Excusing his crudeness, it’s an apt alter ego for the Mo City Don, who is as recognizable for his deep, smooth crooning as for his gritty hustling sagas. Coming on the heels of “Crack,” “Cocaine,” and “Heroin,” “Meth” is another Rap-A-Lot LP from the H-Town vet, and while listeners will find the subject matter familiar, it features the best production, melodies, and arrangements found on a Z-Ro album in recent memory.

Some of the brilliance of “Meth” must be attributed to Beanz N Kornbread, the production duo behind most of the album’s most irresistible tracks. “Never Had Love” is anchored by a rigid, twangy guitar line, layered with menacing horns and a thumping bassline. The Slim Thug collabo “H-Town Kinda Day” is a piece of soulful, laidback genius, with a smoothly whirring synth and sultry guitar reminiscent of an Isley Brothers track.

They also lace the bright “Southern Girl,” a funky, upbeat winner, as well as the standout “Happy Alone,” another manifesto of solitariness from Ro. While fans will recognize it as a song from the blueprint of “1 Deep” and “Do Bad on My Own,” the somber production and contagious hook make this one memorable. “We Ride” is another simple, relaxing anthem, and they also shine on “Razor Blade.” Their approach isn’t particularly ambitious, but the duo is responsible for the album’s most infectious music. They have a perfect concept of the music Z-Ro shines on, and each of these songs have great hooks – definitely keep Beanz N Kornbread on your radar.

Elsewhere, Ro employs his well-worn tactic of interpolating classic R&B and hip hop songs into new jewels, again to resounding success. The Bun B duet “Ro & Bun” draws its melody from Tela and Jazze Pha’s 1996 classic “Sho Nuff”; the menacing closer “That Mo,” another highlight, cleverly interpolates a tune from U.N.L.V.’s “Drag â€˜Em in the River,” an early Cash Money single; and the immensely enjoyable “3 Way Relationship” is a new take on “Me and My Girlfriend,” with Ro detailing a conundrum between two disparate partners-in-crime.

Z-Ro gets raunchy on the hilarious “Pig Feet” (“That coochie so fat, look like it need Jenny Craig”) and “One Mo Time,” a duet with Geto Boys legend Willie D imploring a bride-to-be to “take a pound of this meat from behind.” “No Reason” is a furious banger, and the tracklist is so consistent that it really yields only one track that doesn’t quite stick in the Latin-tinged “Murderer.”

Some fans will find “Meth” redundant in that it hardly varies from the approach and content of its predecessors, but in terms of the material itself it stands among Z-Ro’s very best work. Hearing his visionary narratives and vocals over such appealing g-funk-styled music is a real treat, and it strikes a nice balance between smooth, laidback rollers and heavy street bangers. Here’s hoping the producers assembled here come back for more.