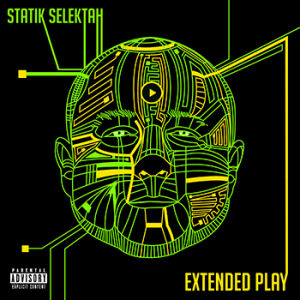 Statik Selektah is one of those hitmen for hire you bring in on an album when you need a hot boom bap track to get the heads talking. His beats aren’t always going to blow up a rapper on commercial radio (though he’s had his share) but that’s hardly the point. When you see the name in the credits next to a song on Wikipedia, you know it’s going to be a certified head nodder. It’s going to have that vintage East coast swagger – that DJ Premier, that Pete Rock, that Havoc sound that makes you heart pound in your chest. He’s the kind of producer you want working with M.O.P., Action Bronson, Styles P and Freeway. The lucky few like Termanology who got to collab’ with him on an entire album created underground gems. He’s the producer’s producer, and he is a working DJ when he’s not crafting jewels, so be sure to “spell the name right.

Thanks to a cooperative publicity department and a heavily watermarked copy (which came with the stern warning “IF IT LEAKS, WE WILL BE ABLE TO TRACE IT BACK TO YOU”) RR was able to check out an early preview of “Extended Play,” scheduled to hit stores on June 18th. A couple of singles have already come out in advance of the album though. First and foremost is “Bird’s Eye View” and it’s pretty much every thing we described in the opening paragraph. Selektah’s R&B soul backdrop croons their way through the tune like Kanye West meets RZA, and an all-star line-up of emcees bless the music with their bars: Black Thought, Joey Bada$$ and Raekwon. In fact if the song had been billed as “Raekwon featuring Black Thought et cetera” people would be screamingTHE WU IS BACK. It’s like that. The second single’s title “21 & Over” might have you expecting J-Ro and Tash, but it’s actually current flavor of the month Mac Miller and the legend Sean P!!!

“Hell of a drug; Sean Price helluva thug
Hang with Sheen – I got elephant blood
Listen to me – y’all better not listen to me
Fuck around and catch a case tryin’ to be like P
Listen – a ring on you brother I’m harmin you daily
Clown – Ringling Brothers and Barnum & Bailey
P! Now download this on your disc
If you under 21 you shouldn’t listen to this – bitch!”

These songs are easy enough to find, but it’s the unheard you want the word on, so let me start by saying Statik selected an incredible roster of talent for this album – and not just East coast rappers. There are the big names you’d expect of course and some of them get entire tracks to solo on – Talib Kweli’s “Home,” Joell Ortiz’ “Bring’Em Up Dead” (I love the Onyx samples) and Prodigy’s “Pinky Ring” all come to mind. Then of course the rappers I mentioned you’d love to hear on a Statik Selektah beat all wind up in the mix too, and I swear to holy that I wrote that opening paragraph before playing “Extended.” Action Bronson is on “Reloaded” and “The Spark,” Styles P is on “Funeral Season” along with Bun B and Hit Boy, Freeway is on “Love & War” with Ea$y Money, and Lil’ Fame duets with Noreaga on the aptly named “East Coast.”

The real surprises are songs like Wais P the Pimp rapping with Boston’s finest Slaine on “Gs, Pimps, Hustlers.” Selektah’s crate digging ear and production technique creates gems whether you’re a known name like Smif N Wessun (the slick “Camouflage Dons”) or up-and-coming looking to make an impact like Meyhem Lauren and AG Da Coroner (“Big City of Dreams”) on an album like this. Some of the collaboration choices never would have occurred to me on my own, but seem so natural and genius after the fact – like De La Soul’s own Posdnuos with Lecrae and Termanology on “Game Break.”

I can happily report there are no bad songs on “Extended Play,” and yet while listening to “Make Believe” the thought crossed my mind “There’s no static from Statik” and by that I mean it’s all too even keel – no friction. I mean it’s nice to see him work with Blu, Bun B and Lecrae but with the cachet that his name carries today he could have gone even further in pushing the envelope. It’s hard to say what would have been far enough, but maybe collaborating with some artists from the UK or Japan would have been a start. I’d settle for Seattle or New Orleans though. Though it’s in some ways cheap to knock an already good album for not being bolder, Statik is in the position to call his own shots these days, as his skills are always going to be in demand. “Extended Play” has the comfortable feel of a mid-to-late 1990’s DJ Premier P-P-P-Premier mixtape though so I’m not mad at it – I just want Statik to knock his next one out of the stratosphere.