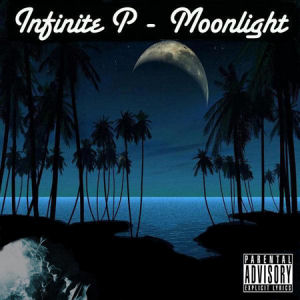 This could have the most fitting album cover that I have ever come across in over fifteen years of listening to hip-hop. Ignoring the fact that this album is actually called “Moonlight”, the serene setting of the cover’s artwork would make the perfect location for soaking up this album. A few friends, something to drink, smoke and eat coupled with this playing in the background and you would have all the ingredients for a chilled evening by the ocean.

“Moonlight” begins with the soulful “Looking Good” where Infinite P aka I. Peezy immediately sets the smooth tone for the album over his own mellow production;

“Shorty with lip gloss, cute pair of flip-flops
In the evening, that’s where we drift off
L-boogie bumpin rollin’ blunts ’til we lift off
Down to do anything as long as she ain’t pissed off
Eighty here, another eighty there
Born in the eighties, I like it when she stare
Booty on point so you know she running stairs
So I’m pulling out her chair, putting fingers in her hair
Keep her inviting, make it exciting
Maybe at the end of the night there’ll be lightning
Motion picture or picturing the motion
End up at the crib and shorty pulling out the lotion”

The combination of Infinite P’s rich vocal tones and his effortless, almost lazy, flow work well together again as you can’t help but nod your head to the next offering, “Doing It Right”. This track sounds like it could have been plucked out of fellow Canadian Moka Only’s extensive back catalogue and it’s no surprise to see Moka himself pop up on “Fuck You”, which follows. Moka Only actually makes three appearances on this album and it is clear that the ex-Swollen Member has had a huge influence on I-Peezy, both in beat selection and lyrical style.

Main Flow shows up to lend his vocals to Nohow’s sample driven “Can’t Give Up” where I.Peezy proves that he can hold his own on the microphone alongside an MC who is known for killing his guest spots;

Infinite P: “I show, I prove, fool, I’ve cremated ’em
Dog reversed, I’m God, I created ’em
Fuck a hater, I’m chilling with your lady friend
on me like a rock star, born for a stadium
The jealous stay still coz they ain’t going nowhere
Ask your girl if I smack ass and I pull hair
‘Hell yeah’, that is the only answer
Blunts to the lung and stay iller than cancer”

As the beat is plodding along and Main Flow is, as expected, tearing up his guest spot, the track is abruptly cut short at just over the two minute mark. It’s a damn shame as this should have been twice the length so that we could hear more from both rappers as they seemed to complement each other nicely. Nohow is also behind the boards on the album closer, “Tour Shit” featuring Rich Kidd and Gudini. It’s a change of pace from the bulk of this release as the producer lays down an up-tempo banger for Infinite P and his friends to go to work on. Despite the quickened pace and harder drums, the track still fits within the overall structure of “Moonlight” and wouldn’t prove too intrusive to any late night beach party that this may be the soundtrack to.

That being said, this is also my main complaint with this album. I found it to be excellent background music. I know that’s a strange line to drop but, after a few spins of this twelve track release, nothing grabbed my attention. Not many beats particularly stood out, no lyric really embedded itself in my mind and I didn’t find that any hook had me, umm, hooked. On the flipside there is nothing on this release that made me want to skip it, you can play the whole album through from start to finish knowing that the level of quality doesn’t drop. Infinite P is responsible for a large portion of the beats which adds to the consistency but it wouldn’t have hurt to bring in another producer or maybe grab a couple more beats from the impressive Nohow to keep things fresh. Overall though this is a decent LP and if you are a fan of Moka Only and that smooth, laid back hip-hop then you might want to add “Moonlight” to your collection.