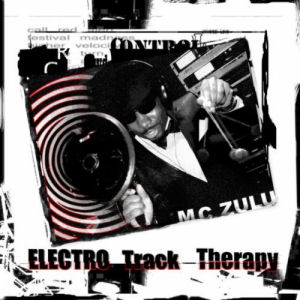 MC Zulu is a Chicago by way of Panama MC who mixes dancehall with dance music, doing what his bio calls “post-dancehall.” He has put out a handful of albums and EPs, and has just released his latest, “Electro Track Therapy.”

The beats combine elements of trance, dubstep, dancehall, and hip-hop, mashing them together into one pulsing, party-starting hot mess. “Festival Madness” is a soca song that uses a trance beat and throws in some dubstep bass wobbles at the breakdown. The effect is similar to Major Lazer’s work, throwing a new spin on dancehall using elements from other types of contemporary dance music. One difference is that rather than there being just two producers, as with Major Lazer, there are many. Poirier, Dawgz and the Bumps, BIONIK, Brotha El, Chrissy Murderbot, Mochipet, Liondub, Searchl1ght, Top Billin’, Maga Bo and Kush Arora are among the many producers here, each offering a slightly different take on ragga and dancehall.

MC Zulu adds a different lyrical spin as well. Zulu’s lyrics are less violent and raunchy than your average slack dancehall MC, and while many of his lyrics are positive, he doesn’t have the Rastafarian bent of conscious dancehall artists like Sizzla. He has a gruff, stentorian voice, which he maintains even when he sings on songs like “Let Me Turn U On.”

Zulu makes party music, but there is a message in his lyrics. “Call Red Alert” is about the violence and police harassment that ruins parties. “Vigilante Gun Court” is about street violence, and “Politics in Paradise” manages to squeeze in thoughtful lyrics amongst it’s dubstep freakout.

As much as I appreciated what Zulu and his producers were doing, I wasn’t always feeling it. I’m not a huge fan of dubstep or dance music, so the energy of the beats was often lost on me. I’ve been listening to a lot of Texan rap the past few weeks, and the aggro beats on “Electro Track Therapy” were a jarring contrast to the leaned-out beats that the Texan boys lay down. Zulu’s delivery didn’t always live up to the intensity promised by the music. He sounded flat on several songs, as if he wasn’t able to capture the energy of a live show on record. It’s not that he sounds bad, but I got the feeling that what I was hearing on some of the songs was not Zulu at 100%.

Despite my criticisms, “Electro Track Therapy” is definitely worth seeking out if you are into dance music or dancehall. MC Zulu delivers thoughtful lyrics over fat beats, making the kind of album that is sure to get the party started and crowd moving and thinking.