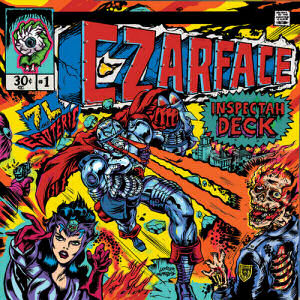 One look at the cover and you know this is boys rap. What is boys rap, you ask? You know how boys can create the most elaborate figments, fastidiously detailed universes full of heroes and villains. Once they’re past a certain age their own imagination may wane but they remain susceptible to relatively simple stories unfolding in spiffed up settings. If you follow me you may go even further and offer if not all of rap is essentially boys rap then, and I’d see your point, but there really is that specific subset of rap that serves as a rec room for the boys and the boys at heart.

Inspectah Deck and 7L & Esoteric aren’t necessarily poster boys for boys rap, but they naturally are drawn to it on their collaboration album “CZARFACE” (pronounced ‘tsar face’). The connection was established as early as 1999, when Deck was, somewhat unexpectedly, featured on the title track of 7L & Eso’s “Speaking Real Words” EP. They resumed their relationship more than a decade later on the inseperable Boston duo’s “1212” album, which eventually led to “CZARFACE.”

The creature they dress up as has been described by Eso as “a vigilante, anti-hero character” whose “focus is on annihilating the media darlings that the mainstream caters to.” In terms of character development and background the project is set up promisingly with “Air ‘Em Out,” a first strike set to a droning bassline and hard drums. A Lil’ Fame-like voice yelling “He just air ’em out / he don’t hear ’em out” acts as the hook while Deck and Eso match their invasive styles. “I’m Dirty at the Grammy’s, crash your glamorous affair,” the Rebel threatens, while the E deploys his trademark wordplay-heavy battle raps:

“Heavyweight, that’s what the title says
Leave you limbless like a Pez
You can suck my dick, Beat my Nuts – Psycho Les
I butcher beats like a psycho les’
Every visual I spit’s Trent when he’s bent, yeah, higher ‘Rez'”

Both rappers are clearly in their element on “CZARFACE.” But that doesn’t guarantee coming up with five when putting two and two together. Because after “Air ‘Em Out” the “CZARFACE” saga is cut short and ends up a typical rap album characterized by references to pop culture and past times, guest spots and familiar imagery and attitude. “Cement 3’s” bobs like a vintage RZA track, the hook features the expected Ol’ Dirty Bastard quote and Deck flows like in the old days. “Savagely Attack” samples INS himself, features Ghostface, and is another rendition of the RZA template as E-S adds to the retro look by framing his verse with “I wrote this in a GS Lex, ’95 / to get that nineties vibe” and “Raised on a tape the same color as Galactus.” “Hazmat Rap” is seemingly straight off a Wu song title generator but dips into early ’00s underground hip-hop with its creepy bassline and banging drums. “Shoguns” highlights the MF DOOM influence that hovers over the entire project while verses by Cappadonna and Vinnie Paz interrupt the back-and-forth building between E and Deck of the first half. “Czar Refaeli” sounds conspiciously like a Gangrene outtake, making you wonder if Oh No contributed more than just the opening verse. “Poisonous Thoughts” only gets interesting when the track switches to accomodate Mr. MFN eXquire and his ’93 swagger.

Meanwhile the DJ Premier-produced “Let it Off” meets pretty much all expectations and sees the two rappers actually level their flows more consciously than on other tracks. “Marvel Team-Up” is another example of such synchronization as they trade bars at a slower pace to a rumbling garage rock groove. Conversely, “Word War 4” puts them on a fast track to the late ’80s with pumping “Assembly Line” drums.

Sonically there’s a lot going on on “CZARFACE.” 7L (with assistance from frequent collaborator SPADA4 on 6 tracks) tries his best to fulfill the comic book-cum-rap album premise with plenty of samples from a variety of sources, including cartoon soundtracks. The production is layered but still aims for the simple joys brought by dope breaks, kicks and cuts. That Inspectah Deck’s precise diction and flow somewhat clash with Esoteric’s rushed mumble is part of the attraction and moreover, they sound more cohesive than they did fourteen years ago. As far as concepts go, however, we’ve heard more convincing ones. As action-packed as beats and rhymes are, “CZARFACE” was a quick read I soon found myself putting back on the shelf. And that isn’t necessarily due to the ‘boys rap’ classification. On the contrary, if the trio would have explored their exuberant imagination just a bit further they might have eventually crossed paths with innovation.