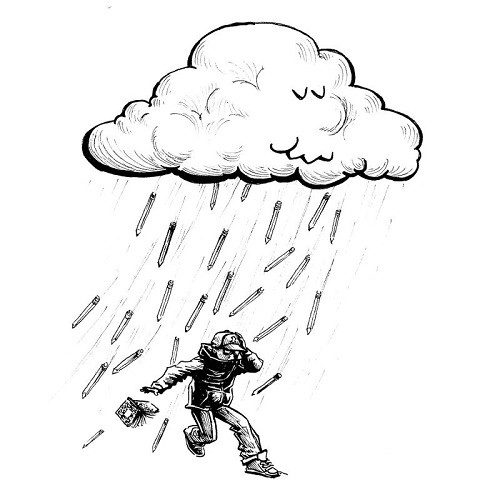 The great thing about RapReviews.com is that we’re always late with reviews. That may sound like a dumb thing to write that’ll have the owner rejecting any future musings from yours truly, but it rings true when it comes to critiquing rap albums. That’s not to say that our opinion is superior to other, bigger outlets such as HipHopDX or Pitchfork (yes I’m naming names), but it does mean that a record such as Elzhi’s “Lead Poison” can be judged from a more realistic standpoint. It’s had time to marinate and unravel its depth. Along with Anderson .paak’s “Malibu“, Elzhi’s latest album has been my most-played record of 2016, and given how lyrically intricate the project is, it’s fair to say that I’m still finding new bits of wordplay many months after it released.

Musically, understated could well be an understatement (a future Elzhi lyric right there). There’s certainly a somber tone throughout the album, representing Elzhi’s battle with depression as well as his preference for more story-driven rhymes. Beats don’t always have to knock or “bump in the whip”, and while I’d have welcomed a couple more bangers, “Lead Poison” sounds more cohesive because of it. The sheer depth of lyricism is more digestible than El’s debut “The Preface” because of it.

“Lead Poison” is noteworthy for the creativity evident throughout every song. By 2016 you’d think that emcees had covered every topic in every conceivable manner, but the way the varying themes all flow together as one LP feels natural and far from forced. The single “February” makes sense as it is the most straight-forward song despite having connotations of cold temperatures, Seasonal Affective Disorder and St. Valentine’s Day – all potential contributors to depression. However, what appears to be a piece of nostalgia with Elzhi remembering fonder, carefree moments from his childhood helps to mask his negative current mindstate. Knowing that Elzhi struggled with his mental health makes “Lead Poison” all the more potent. It’s not a record that tackles depression directly (Trademarc’s bluntly honest “Black Ash Days” does that) but one that certainly possesses a somber, more serious feel than his previous albums. The one track that does hit hard is “Alienated”, a beautiful combination of loneliness and space metaphors. Elzhi is so miserable that he would rather move away from Earth to truly be alien-ated. There’s some ‘out of this world’ intergalactic wordplay that feels as playful as a game of Super Mario Galaxy but is clearly not as fun an experience.

This is thinking man’s hip-hop (and woman’s!). “Egocentric” sees El rapping as if his ego is a separate person, with its own personality. It’s a simple concept but one that is expertly delivered, making the listener question whether 99% of rap music is actually just emcees’ egos venting, rather than their true thoughts. Can somebody be so egotistical that they are the equiavlent of a schizophrenic? Probably not, but it’s shit like this that makes me think in to each and every track on “Lead Poison”. Concepts drove “The Preface”, but the ideas and execution are operating on a different level here, with a track like “Hello!!!!!” being the most meta piece of hip-hop I’ve ever heard. Elzhi takes on the persona of a song – he is the song, constantly trying to keep the listener’s attention and wondering if they really care for the time and effort that went in to the recording and writing process. Then there’s “Friendzone”, arguably Drake’s favourite topic, but Elzhi’s approach is delivered in a blunter manner, questioning the logic behind women’s wish to marry their so-called best friend while continuing to hook up with idiots. Of course, love and lust aren’t as binary as some of the arguments put forward by Elzhi, yet it does touch on some relevant points, all delivered in a blunt, very male manner. Aside from very down-to-earth topics, Elzhi gets (even more) creative on “She Sucks” – a tale of being seduced by a female vampire that leads to him being turned in to a murderous vampire himself. It can be taken at face value, but it hints at the conventional interpretation (in hip-hop at least) of a female luring a male in with oral sex and it leading on to regrettable incidents in the near future (such as a child or a destructive relationship).

And that’s the beauty of “Lead Poison” – there’s various ways that the rhymes can be construed. Emcees’ obsession with dropping hot sixteens (16 bar verses) is flipped on its head on “Two 16s” with Elzhi using the number sixteen to drive two different stories. The first is a standard tale of a teenager getting in to the wrong crowd and dying 16 hours before his daughter is born, while the second is a 16-year old girl who falls pregnant but is arrested shortly after giving birth. The two could be connected, they can both be viewed as sick-teens (16s) but most importantly (and tying it all together) is that education is mentioned as the key turning point in both stories. The former “thinking he knows it all” yet getting poor grades, and the latter skipping class to have sex and “kissing ass” to try and blag the test she should have been studying for.

There’s very little wrong with “Lead Poison” – it’s a densely lyrical record that’s immediately accessible. The decision to omit last year’s single “P.S.” is disappointing particularly as it’s one of the catchier efforts from Elzhi. The one track that is potentially offputting is “The Healing Process”, because it’s Elzhi showcasing his flow at a near-Busta Rhymes level of relentlessness. Pedantic niggles aside, “Lead Poison” is a record with legs that gets better the more you listen to it. Let’s not throw around the C-word just yet, but with 2008’s “The Preface” representing Elzhi’s modern, classically Detroit-sounding debut, and 2011’s “Elmatic” seeing El recreate and almost outdo Nas’ “Illmatic” (which should really never be touched), “Lead Poison” is actually his best yet and certainly the best piece of hip-hop I’ve heard this year.