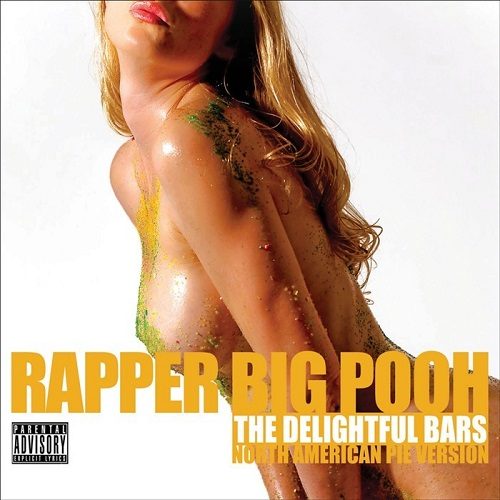 This album is a bit of a monster to review. Floating around out there in four different versions receiving varying levels of circulation, it’s hard to even pin down the album as such, let alone get a hold of it as a piece of music to be digested as a whole. Its various incarnations include a “Candy Apple Version” released first and especially for iTunes, a “North American Pie Version” which features a couple extra tracks, the mysterious “Japanese Daifuku Version” which barely seems to exist, and a “Belgian Chocolate Version” about which I can find nothing other than the candy-fied rear end on the cover art. Yum.

In whatever form you find it, it represents Big Pooh’s first foray into the solo market since 2005’s “Sleepers,” with two Little Brother albums released in the intervening years. In the interim, he has taken a step up in terms of respect in the rap world, brushing off the naysayers as he did on the introductory song of his last album by taunting, “You say Pooh the weak link, nigga â€“ I don’t care!” Now, after garnering praise for his improved effort on the LB’s latest, “Getback,” he’s stepped back into the solo arena with even more swagger and a familiar cast of characters backing him up.

Once again, Khrysis plays a significant role on the production end, which once again leads to stellar results. His presence is felt the most on the Candy Apple Version, where he produces five of eleven proper songs, including the pulsing organs of “Power” featuring O. Dash and the militant snare drum-fest on “The Life.” His best contribution thankfully shows up on both versions in the form of “The Comeback.” This song boasts an impressively layered beat, complete with persistent chord stabs and lovely little percussion features thrown in at varying intervals. It also benefits from a catchy hook that will have you humming, “Pardon me, y’all,” all day long.

Pooh brings in a more diversified production line-up this time around, but it doesn’t dilute the quality any. Dae One’s handclaps and descending melody line provide an apt backdrop for the statement of purpose from Big Pooh and A-list guest Torae, who I could always do to hear more from. Young RJ gets all silky smooth with a musical accompaniment that slinks and slides all over the beat in support of rhymes by Pooh, Ab Soul, Jay Rock, and K. Dot. “Move” vibes thanks to some punctuating horns and keys, plus the welcome vocals of LB alum Darien Brockington.

Basically, the production bangs from front to back. Whether it’s lesser knowns like The Co-Op or bigger guns like Jake One and Oh No, the album rarely hits a wrong note on the musical tip. As for the rhymes, Pooh continues his streak of steady improvement with another solid effort. Call it the Tiggalo shadow if you like, but for whatever reason Big Pooh always shines the brightest when he steps out on his own. He’s a rapper who’s more about style and swagger than intricately crafted lyrics that you spend hours transcribing, and he is better able to put his skills on display when he goes for delf. That’s not a knock on his rhymes by any stretch, just an acknowledgement of the particular skill set he brings to the table. Whether he’s getting all multisyllabic on your ass or not, he’s always going to bring an authentic feel and relatable substance to the track that your average rapper can’t approach, which is commendable in itself. When paired with production of this level, the results are predictably positive.

If there’s anything at all to complain about on the album, it’s the almost negligible presence of any Little Brother affiliation. 9th Wonder, the now ex-LB beatsmith, produces all of one song, and Phonte declines to make any appearance of his own. Sure, Hall of Justus fam Chaundon and Joe Scudda stroll through, but, despite the props I just gave to Pooh as a solo artist, another chance to hear the chemistry between the two LB MCs would be plenty welcome and seems a logical inclusion here. That we aren’t treated to one is one of the few drawbacks on an otherwise thorough listening experience. Pick it up â€“ you can’t go wrong with any of the four versions.