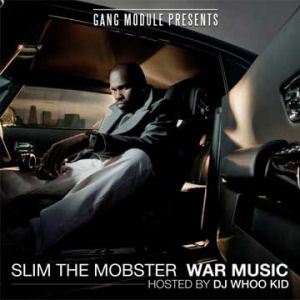 As far as hardcore rap is concerned, Dr. Dre has the golden touch. The development of Snoop Dogg, Eminem and 50 Cent into international superstars makes up just a few of his many accomplishments as a record producer and hip-hop mogul. All those platinum plaques combined with his successful line of headphones, Beats by Dr. Dre, and the highly anticipated (and delayed) “Detox” record prove Andre Young won’t be slowing down anytime soon. Despite this success, a number of emcees like Rakim, Stat Quo and Bishop Lamont have failed to release Aftermath albums either as a result of creative differences or Dre’s own quest for perfection. As the D-R-E’s latest protÃ©gÃ©, Slim The Mobster understands that his work on “Detox,” along with his own street mixtape, “War Music,” will ultimately determine his fate on the record label. Released in November, “War Music” chronicles Anthony Johnson’s life growing up in South Central Los Angeles as he attempts to cement his status as the new face of West Coast gangsta rap.

Staying true to his name, Slim The Mobster pulls no punches when it comes detailing his former life as a member of the Crips. Like any good gangsta rapper, Slim’s tunes feature a steady lyrical dose of violence, misogyny and hedonism combined with his own original swagger and sly voice. For example, “Martyr” featuring Prodigy contains an incredibly dark and slow-paced beat where both emcees effectively trade war stories about seeking vengeance on their foes at all costs. “Fuck You” featuring Yummy Bingham is a standout tune that contains a nice combination of conga drums and horns leaving Slim room to go on a lyrical tirade and establish that as an emcee he is not to be messed with:

“Middle finger to the law, while I’m gripping my balls
Risking it all, fuck around and get a round of applause
And ah no, we ain’t fallin’ for the bullshit
Niggas will have a problem if I’m letting my tool spit
You’ll get hit with the yellow tape, toe-tag, body bag
Plus I got the same color guns John Gotti had
I ain’t gotta mask and I ain’t gotta ask
When I see you that’s your ass and that’s that, nigga
More bitches, more liquor, more money
It’ll come fast but go quicker
I’m so sick of these so called know-it-alls
Knowing that it’ll go down if it pops off
Chip off the old block, with a chip on my shoulder
Couple clips in the holster
And when the coroner zips up the bag it’s over
21 gun salute for the fallen soldier
You fuck with one of my troops and we going to war like we suppose to
I told ya”

“Whose House” featuring Kendrick Lamar continues with the aggressive subject matter, though it features a nice change a pace with a solid organ and piano loop along with crisp drums. “Back Against The Wall” featuring Dr. Dre and Sly is another outstanding track with funky keys and incessant drums. Both rappers reflect how their hustling skills have been heavily influenced by the stone-cold mentality of the streets. “Gun Play” may be the only tune to skip on the record as it has gratuitous violence and an annoying string-laden beat. Outside of the hardcore tracks, songs like “See It” and “What Goes Up” featuring Snoop Dogg allow the South Central emcee to lyrically glide and floss about cars, girls and money in a charismatic way.

The most intriguing element of “War Music” is the constant dilemma Slim faces between street life and going legit. “Dreaming” featuring Nikki Grier features a somber, tinkling piano and hard beat where Slim depicts a peaceful evening with his family turned tragic, as hoodlums enter his home looking to rob and kill them. The funky “South Central Blues” featuring D Brown mentions to kids that he’s learned from his mistakes and advises them to go another route. “Falling Star” is a great track and is a continuation of Slim’s grapple with his past ways and hope for a better life:

“Even though I know I’m far from untouchable
Niggas know they gone, if I tell ’em go, they going
My little niggas martyrs, ran the block like The Carter
So I’m hopin’ that karma don’t come back on my daughters
Now I’ve got no choice but to think smarter
Knowing I’m on the verge of going back to the curb
I work harder, my heart have to stop before I have to stop
Trying to get what I deserve and I deserve the top spot
Shit got a nigga going crazy, it’s starting to get to me
I don’t think I can take it”

With a soaring hook from Nikki Grier and vocals from Sly, this melancholy, piano-laced track epitomizes Slim’s potential to combine lyrical gangsta rap with a degree of consciousness. Clearly, this internal struggle gives him a sense of humanity that many hardcore rappers lack when they rhyme. As the old saying goes, “You can take the person out the hood, but you can’t take the hood out the person.” For Slim, the warzone that is the ghetto made him the man he is today. However, to achieve his goals as a rap artist, he must be aware that the legal route is the only option. As a mixtape, “War Music” is a must listen and shows that with further guidance and production help from Dr. Dre, Slim The Mobster has the potential to be a dominant force in the world of hip-hop. With the release of “Detox,” followed by Slim’s debut album, it will only be a matter of time for the West Coast to be on top of the charts once again.