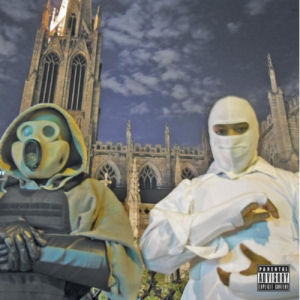 Twin Perils are a Brooklyn duo made up of rapper Lone Ninja and rapper/producer/Iraq War vet June Marx. “Speak and Destroy” is their third album, following 2008’s “Dark Alliance” and 2010’s “Word Supremacy.” The two rappers have also put out several solo albums. Twin Perils does militaristic post-apocalyptic hardcore East Coast hip-hop, in the vein of Cannibal Ox and Jedi Mind Tricks. The cover of the album has the duo posing in front of a church with June Marx in what looks like a samurai hazmat suit, and Lone Ninja dressed like a ninja. Their song titles further drive the point home. With names like “Systematic Elimination,” “Avenging Souls,” “Wrath of Heaven,” “Army of Two,” “Red Storm Rising,” “Mercenary Barracks,” and “Scattered Shrapnel,” you know before you even press play what Twin Perils are all about.

Here are the basic facts about Twin Perils: Lone Wolf raps in a monotone, all of the songs seem to be about war, and the lyrics are as impenetrable as the bullet-proof armor the duo have posed in. That impenetrability is worth discussing further. Whatever you want to say about Lone Ninja’s flow, both he and June Marx can rap. Their rhymes are as complicated and intricate as the scrawlings of a schizophrenic who is convinced he’s discovered a vast conspiracy in random words in newspapers. Twin Perils are crazy deep, with an emphasis on the crazy.

Most of the songs are two minutes long, and preceded by a sample of a movie or TV show about war, nuclear bombs, or sewing enemy warriors’ eyes and mouths shut so their soul can’t call for revenge. It’s almost as if Twin Perils see something in a movie or on TV that inspires them, and then make beats and write raps based on it. “Swinging Lanterns” starts with a clip of a woman saying “On nights when the dogs howl, people put out lighted lanterns to ward off evil spirits.” Then a somber beat kicks in, and June Marx raps:

There are moments on “Speak and Destroy” when Twin Perils hit their stride. “Bomb Shelter” is the strongest song on the album, backed by a sinister, banging beat with Marx and Ninja spitting fierce rhymes like “you’re losing the match when we’re dueling or wrasslin’/Schooling your classmen a grueling assassin.” At their best, the duo come off like a more militaristic Wu-Tang, spitting convoluted street tales with their own complicated mythology. However, the majority of this album is made up of songs with dramatic, plodding beats and inscrutable rhymes.

Twin Perils’ suffer from the same problem many underground New York rappers fall prey to. In their quest to prove themselves the realest, most hardcore, and most authentic students of hip-hop, they make music that is so focused on technique and keeping it real that it is no fun to listen to. Their rhymes are so intricate and complicated and technical that they are impossible to decipher. It’s the exact opposite problem that Southern rap has. Southern rappers get knocked for having too little substance, and East Coast rappers like Twin Perils have so much substance their music is almost unlistenable.

Judging from the number of people commenting about the ever-changing release date of “Speak and Destroy,” Twin Perils have a dedicated following who appreciate their brand of militaristic rap. I respect the time, energy, and passion that June Marx and Lone Ninja put into their craft, and I’m glad that they’ve found an audience that appreciates their intricate and paranoid rhymes. However, I could not get into this at all, and had a hard time listening to the entire album. If you like your hip-hop dark and paranoid, “Speak and Destroy” might be for you, but I’d advise that you approach with caution.