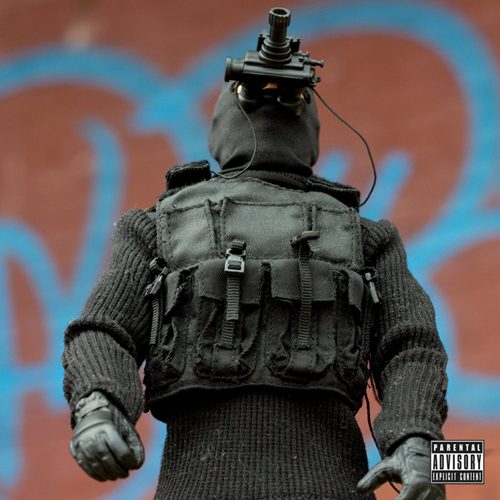 Quoting a Sean Price lyric is always a fun way to start a review, and hearing an emcee brag about their criminal misdemeanours ON RECORD always struck me as stupid rather than “cool”. Especially if the emcee is deadly serious throughout an album, and whilst Lone Ninja is not a gangsta rapper, there are certain characters in hip hop that beg the question should this character be rapping? The Sean Price line also relates to the character Lone Ninja purveys. His album cover resembles the latest Tom Clancy video game, with Ninja adorned in stealth fatigues and night vision goggles (in daylight for some reason). And just as Lone Ninja is probably now blind, I’ve been blind to Lone Ninja’s work. Considering I like to keep up with my underground hip hop, Lone Ninja has sneakily crept under my radar, and looking at the producers and guest features, only Cyrus Malachi resonates with me. That’s only because he is one of my favourite British rappers, a real powerful presence on the mic with a large vocabulary. But what of Lone Ninja, an emcee entrenched in mystery and as my colleague Flash said in his review of “Fatal Peril”; seriousitosis.

Unfortunately, the seriousitosis seems to be ever present throughout “Rogue Agent”. Apak on “Onslaught” and the aforementioned Cyrus Malachi on “Battle Dress Uniform” breathe short bursts of life into the constant theme of death but other guests sound decidedly amateur in comparison. “Super Soldier” features a suitably chaotic string-laced backdrop from Lord Gamma, but offers little lyrically other than monotonous threats. “Defiant Threats” is the finest example of stealth-rap with a beat laced with tension and decent story-telling from Ninja. The only issue I have is the frequent switching between reality and the realms of fantasy as what starts as an interesting story quickly morphs into Saturday morning cartoon fodder:

“I snuck inside the ground floor
Ducking, hide around walls
Invisibility, hid in facility
Swift with agility
Forced entry, I sought sentry
I cross fencing, crawl vents and stalk and siege
Gruesome, relentless, ruthless burier
Move undetected in restricted area
Lost your life, â€˜cause you aggravated Lone
Walk the night through evaporated zones
The sword the spear the bow and arrow
The lord appears with thoughts for battle
More clientele for a hired gun
War riot shields in violent slums
I’m merciful with the surgical strike
I’ll murder you, the insurgent will fight”

“Show of Might” reeks of Army of the Pharoahs but hearing Lone Ninja’s emotionless tone being overwhelmed by the powerful production has him increasingly pushed to the background. “Sand of the Arena” features Vega X, who can only be described as Jus Allah’s apprentice. It’s hard to listen to endless violent imagery without occasional humour or use of wordplay. It’s the reason Vinnie Paz has been so successful. His use of violence is so over the top it becomes hilariously tongue-in-cheek. This just isn’t evident on “Rogue Agent” and the album suffers for it, regardless of the deadly serious notion of a ninja in stealth apparel. “Hard Boiled” features numerous James Bond references, which is strange when the track is clearly named after John Woo’s infamously ultra-violent Hong Kong action masterpiece. Even that film had the audacity to include a ruthless killer walking out of a hospital with a baby in his arms. There’s just no let-up on “Rogue Agent”, no hint of humour, interesting wordplay or standout verses. With each track lasting no longer than two minutes, clear punching-in mid-verse and an unclear direction throughout the record, it is hard to recommend the album to any sector of the hip hop spectrum.

Musically “Rogue Agent” is a solid effort, but whereas Sam Fisher is full of conviction, Lone Ninja somehow drifts through each track undetected. The monotonous, almost emotionless delivery doesn’t match up with the dramatic production, or perhaps that is the whole point. A ninja that raps isn’t supposed to be a master emcee, he kills first, raps second. Of course this is all fictionally depicted, but if this “Rogue Agent” could focus a bit less on the killing and a little more on the delivery, Lone Ninja could one day become a worthy addition to hip hop’s growing catalogue of character creations.