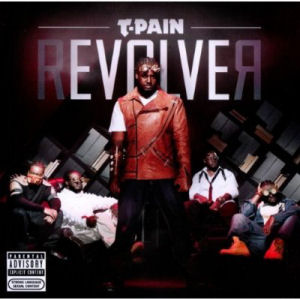 T-Pain has been taking his sweet time since 2008’s “Thr33 Ringz” when it comes to putting out a new album. To be fair though it’s not exactly like he’s needed to drop one to stay relevant. He’s unquestionably the voice of digital R&B hip-hop; in fact, if that was a category at the Grammy Awards, he’d be the sole nominee and annual winner each year. A lot of people have tried to duplicate his Auto-Tuned style with varying degrees of success, but if you really want your single to be a hit you put T-Pain on the original or the remix. Haters are quick to knock him as being a one trick pony, but this horse has been on a six year run now and doesn’t seem to be slowing down any time soon.

“rEVOLVEr” uses double entendre of the incredibly obvious variety in its title – implying that Pain gets it poppin’ like a gun yet is offering something evolutionary and new in his 2011 style. I’m glad he came up with a cute concept, but to be frank (and this is not a negative) there is nothing new about T-Pain’s style here. It’s not as though his voice suddenly got deeper or richer. It’s not as though he unplugged all the digital voice manipulators and went acoustic. It’s not even a change of topic matter for the rapper turned singer – he’s on that same shit he’s always been about. For those living under a rock who are new to T-Pain, that includes (but isn’t limited to) drinking, sex, clubbing, and mo’ sex. The single “5 O’Clock” featuring Lily Allen and Wiz Khalifa covers all of his favorite subjects in one shot:

“It’s 5 o’clock in the mornin, and I want ya
And you want me, don’t ya?
I can see it; cause you’ve been waitin on me
since I said that I was hittin the club
The sun be comin up on me
And I know you be gettin so horny
Cause you be sendin me textses, like “Boy just get yo’ ass up
in that car and come get all of this lo-ooove”
(It’s 5 o’clock in the morning) You ain’t gotta remind me
She already said if I don’t come on time she
might go crazy; and she’ll be waitin on me
naked with one of my chains on
She might come and find me, oh-oh-oh
And then ask me kindly, oh-oh-oh
Do I want her to go crazy? We do this every night
and then we always wake up singin the same song”

Pain’s favorite drink of choice lately is Nuvo L’esprit De Paris, which he mentions in this song and several others, to the point they should probably send him a complimentary crate of the stuff. That’s fine Pain, get ya drink on. He lists some of his other favorite brands on the bass heavy, Catalyst produced “Bottlez,” vowing that he’s “so drunk I can’t even see your face.” When he cansee her, he’s looking for a “light-skinned girl with the curly hair” on “Mix’d Girl,” hoping Tha Bizness can help him make a bi-racial love connection over light pianos. He’s not sure if he believes that honey is Japanese, but says “you really got sex appeal, so I really gotta keep it real” anyway.

And that’s pretty much how it goes on “rEVOLVEr” – a whole lot of drinkin’, dancin’ and fuckin’. The guests, the producers and the tempo changes song to song, but the subjects stay familiar. DJ Chuckie gets a little Ke$ha with his mix to “It’s Not You (It’s Me),” where T-Pain admits to his inability to commit to fidelity. You might think a track with Chris Brown called “Best Love Song” would be romantic, but Pain is on some third person shit on this Young Fyre beat. He talks about how he’s pitching woo to a girl in the club, but to impress her, he’s got to sing her the best love song she’s ever heard. (Why talk about doing it? Why not just do it?) The self-produced “Sho-Time (Pleasure Thang)” is actually what you would have expected romantically speaking – a quiet storm croon for the bedroom. “Turn All the Lights On” is the exact opposite – a Dr. Luke song which stomps so hard you’d think it was a Pitbull club track. The only cut I’d really call revolutionary is the five minute opus “Drowning Again.”

“Waves upon waves keep me down
And I can’t get to the top
But when I get there I’ll still be nowhere
Cause I ain’t find the one I love
And if I make it out then we should talk about
how you left meeeeeeeeeeeee
Just how you left me
Drownin againnnnnnnn, yeahhhh
[…]
Days upon days I’ve been floatin
And you don’t care if I die or not
But when I’m deceased I hope you will be
dyin next to me in my watery grave
And before we go I just, want my baby to know
how it feeeeeeeeeeeeeeeels to beeeee…
Drownin againnnnnnnn, yeahhhh”

This self-produced track includes vocal support from One Chance, but it’s Pain in the starring role throughout. T-Pain opens himself up to an emotional rawness and vulnerability not often heard from the swaggering crooner, and it’s a revealing look at the man who hides behind the Auto-Tuned curtain. More of this kind of music would have made this album a true evolution of Faheem Rasheed Najm’s career, but instead he falls back on familiar if enjoyable themes time and time again. From his techno-lust ode to a girl on Twitter on Young Fyre’s “Default Picture,” to the hip-shaking Nuvo laced “Look at Her Go” with Chris Brown, to the “I just wanna do ya, get you to my crib and seduce ya” frankness of “Center of the Stage” with R. Kelly, it’s all the same thang with different twists. This is not disappointing. If you want the T-Pain you know and love “rEVOLVEr” delivers that in spades – but he doesn’t really EVOLVE at all.