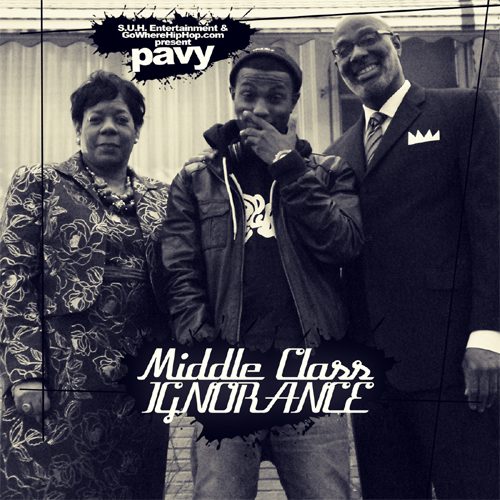 As each hip-hop generation goes, a new one comes along to continue the traditions of their elders, while simultaneously presenting a new and unique perspective on the music and culture. We’ve got a hip-hop generation coming up right now who were born in the early 1990’s, or at the very latest the tail end of the 1980’s. For this group there has never not been a ubiquitous internet presence, and cell phones were never bigger than the bricks making up city buildings. They came after the Wu-Tang revolution, they have no fond memories of Yo! MTV Raps, and they don’t remember the L.A. Riots or Rodney King’s impassioned pleas. Their perspective is therefore unique to hip-hop, and we’ve seen that bear fruit from the likes of Lil B and Tyler, the Creator. Though they have their share of fans and critics alike, they’re what’s coming next, and hip-hop’s intelligentsia ignores them at their own peril.

Pavy’s press release for “Middle Class Ignorance” describes him as coming from this same generation, and perhaps takes it a step further. It outright declares that by the time these kids started to come of age to appreciate hip-hop, Biggie and ‘Pac were both long dead, and Ol’ Dirty Bastard was already in rehab and one foot from the grave. That’s harsh but it’s certainly accurate – their heroes are not ours. It may also be a sly nod to today’s cell phone generation to say “they may not win the spelling bee, but they know common sense.” Auto-correcting software has certainly taken the work out of having to spell right, and the OMG RLY LMFAO slanguage lacks any rules other than its own.

These kids are grown and ready to take on hip-hop, and the Chicago native Pavy is from that next school. He’s also got his own flair though – he’s not as prolific as the #BasedGod or as unapologetically weird as Tyler. Intentionally or otherwise he actually has a lot in common with his peers from the Windy City. He has the thoughtfulness of Lupe Fiasco, the political sensibility of Rhymefest, and the playfulness of Kidz in the Hall. He’s unwilling to follow the conventional rules of self-definition, going out of his way to tilt at windmills with tracks like “Pointless Rap Song.” Despite the title, there really IS a point for Pavy – being an original emcee with no style restrictions:

As it turns out Pavy also considers his name to be an acronym for “Progressive.Ambitious.Vigorous.Youngin'” That progressiveness can be heard on songs like “Neglect,” where he talks about not going out to get smashed or doing things like a typical 20 year-old his age would.

“Cause if you want it all, then in you you must invest
So I don’t want the fun, nigga I would rather stress
[…] See I just wanna rap
I know I have a purpose and I know that it is that
So I don’t wanna party, you can keep your liquor
I’d rather stay up big, grab a pen and paint a picture
See this is my neglect”

And even though he’s from Cleveland and not Chicago, there’s a little bit of Kid Cudi in Pavy. The darkness swirls around him on songs like “Left Shoulder Vs. Right Shoulder,” where the angels and demons surrounding him try to convince him which way to go with his life. Coincidentally or not the next track is “Rage,” where he lets go of his emotions and screams “if you don’t see it how I see it NIGGA FUCK YOU.” Well! Most of the time he’s in control though, and in fact songs like “Typical Gangsta Shit” playfully mock the conventions of being a hardrock. “You claimin that you want to be different/but the roads you goin down I ain’t willin’ to listen.”

While it’s very early in his career to declare Pavy the next big thing (the album doesn’t even hit stores until January) “Middle Class Ignorance” shows that Pavy is not out to tear down hip-hop as we know it. In fact he’s traveling down the roads that the previous generations of hip-hop laid down for him – they paved the way and he’s just moving further down the line. Keep an eye out for the next generation of rap. Don’t fear change – embrace it.