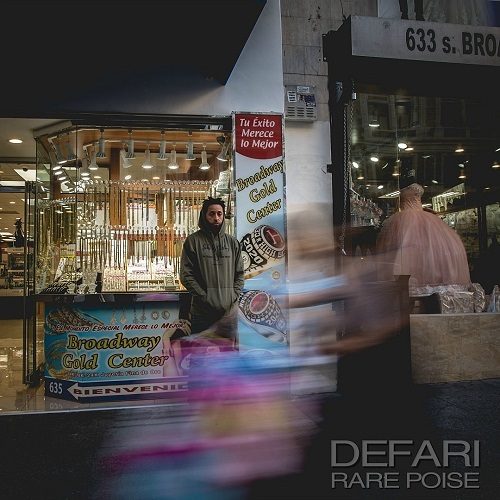 The above statement a Reddit commentator left last year illustrates, in a humorous way, the fast-moving nature of internet fame. I likely came across it with the same question in the back of my mind, looking up some random, in younger circles surely immensely popular online personalities allegedly exchanging ‘diss tracks’. The good thing about hearing about someone like Defari and not being able to place or put a face to the name is that the encounter doesn’t invite such existential dilemmas. There’s no peer pressure involved. You don’t have to know Defari. But you can get to know his music.

As for the man himself, he’s lucky enough to have a relatively informative Wikipedia page, but like his AllMusic bio it mainly covers his background at the time he was a debuting artist in the later ’90s. (An interesting part of which was that he went from being college educated to becoming an educator himself.) Defari has since recorded with irregularity, “Rare Poise” being only his fourth solo album in almost two decades. He’s a member of (all but defunct) West Coast collective Likwit Crew and represented said crew in the Likwit Junkies, his 2005 collaboration with the Dilated Peoples’ and Beat Junkies’ DJ Babu.

The bottomline is that Defari is a voice from the past, not the uncertain present where you wake up every morning to another overnight success. Reuniting with producer Evidence, Defari isn’t primarily concerned with reintroducing himself to a new audience. Seemingly the opposite. With the very first words on his comeback he tries to reconnect with his base. “They say they care about the man / Well then, hey – here I stand,” he repeats, before exchanging brief bars with his producer. Both represent a long lineage of West Coast MC’s with laconic flows and weathered voices, and while the kinship is evident, it’s probably a good idea that Ev sticks to producing for the rest of the album, because a full-scale collaboration would barely have the potential of Step Brothers, the latter’s project with another longtime associate, The Alchemist.

With the Dilated Peoples member’s career remaining on a stable trajectory (he released his third solo album earlier this year), the exclusive Evidence beats are “Rare Poise”‘s major selling point. The opening organs of “Acknowledgement” are under typical Evidence weather, partly cloudy, partly sunny, and while the subsequent “Church Piano” seemingly only bears a working title, the ivories resonate deeply, Defari taking the opportunity to deliver bars of civil righteousness that echo previous emancipation efforts:

“We number one consumers, smarten up, let’s use this
We don’t own none of the city, balling’s useless
They can’t domesticate me, man, the Chinese hate me
Why the suspicion, why, it’s still slavery?
Excuse my observation, in my occupation
My skin color give police reservations
Unless I’m playin’ on a field or a TV station
They rather have me in the fields or callin’ in my cases
But yet I’m optimistic, always realistic
Have they forgot my grandad and uncles enlisted?
And served a country that always liked to say f**k me
‘It’s okay, young fellow, you people unlucky'”

Defari Herut retains his poise even in tumultuous times. To what degree said poise is rare in the sense of artistically ‘exceptional’ and ‘extraordinary’ is another question. The assumed centerpiece of “Rare Poise,” the title track, is over soon, Evidence’s approach to spiritual music too subdued and Defari, at one point randomly breaking into a “Walk on By” rendition, slows down his flow to the point of a poetry reading where a thrown down put-down like “You niggas be off-balance with some questionable talents” that would be worthy of King Tee fails to take full effect.

One thing Defari has going for him is that he’s feeling himself. With the exception of single “Take Me Away,” where he tries to soar at a higher volume over the more contemporary beat, he sounds at ease. He embraces his own old ways, not to mention that he basically always sounded like that. He has become even a bit more relaxed, creating several moments that are memorable for their unique tonality or tempo. He can’t fully escape unfavorable comparisons – Rakaa Iriscience’s sharpness makes his bluntness all the duller (“Occupations”) and Phil The Agony, similar in style to Defari but possessing more friction, delivers an inspired performance (“Dedicated”) – again in comparison to the host.

As Defari gives a stock veteran performance, Evidence arranges variation. “It’s Like I’m You” revisits early ’00s chipmunk soul, “Occupation” taps into dub’s suitability to sound like a (menacingly prowling) warrior’s drum. A couple of times he channels mystic ’70s rock grooves to create a more harmless version of Oh No and Alchemist’s Gangrene project (“Mount Up,” “Lost Angel”). “Break Wide” features trappish drums, while “Steeple Chase” full submerges into a sweet soul snippet. Sometimes it’s apparent that the vocals or rhymes fall short of the potential of the beats (“Who God Bless No One Curse”), other times there’s not that much potential in the beats to begin with. Movie samples are thrown into the mix, but don’t necessarily create a higher understanding of what the duo is trying to say.

The music on “Rare Poise” is okay, the rhymes are sometimes. When it’s time to show and prove, though, hip-hop heads (including Defari and Evidence) have to know that just ‘okay’ is not really okay. That’s why Defari’s 2017 album is ultimately a disappointment, lacking the cohesiveness and artistic focus of Evidence’s latest. If you’d still like to familiarize or reacquaint yourself with Defari, the video singles “It’s Like I’m You” and “Take Me Away” give a good impression, but for a more solid introduction, his 1998 debut would be the more logical choice. “Rare Poise” was initially slated to be called “Soundcheck,” and it sounds every bit like one.