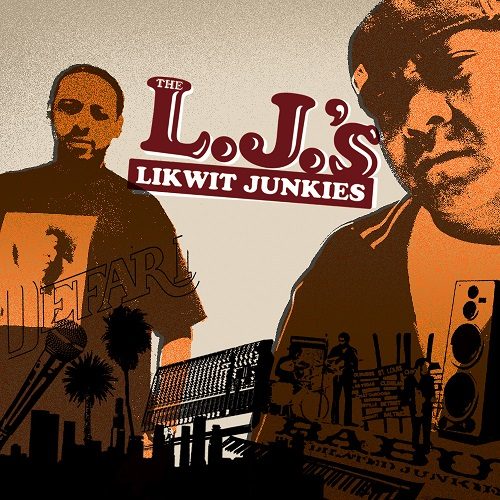 here’s nothing like the cold comfort of a chilled, fizzing mug of your favorite beer. There’s also nothing like lounging on your porch in 75 degree weather as the sun’s setting, with the warm breeze massaging your skin. Both can be ranked high in the pleasure category, however, when combined, all your worries seem to fade and you wonder how something so simple could come to define enjoyment.

Defari has been a respected west coast MC for a number of years now, although his solo career hasn’t quite ballooned yet. DJ Babu is at the pinnacle of turntablism, but his reputation as a producer hasn’t matched his vinyl slicing mystique. Clearly, both are solo forces to be reckoned with but when combined, something is created that’s even bigger than the sum of its parts. The Likwit Crew and the Beat Junkies come together to form The Likwit Junkies and they’re proving that they have what Common calls “that cold beer on a warm day chemistry.”

“L.J’s Anthem” kicks the album off with perhaps the darkest beat on the album. The tingling piano keys strike an eerie vibe as Defari claims their music will “make ya heart pound through your chest// make ya heart jump out of your bulletproof vest.”

Fellow Likwit affiliates Phil Da Agony and Evidence of the Dilated Peoples punch-in on the “Strength in Numbers.” Phil comes ripping through with an angry energy, then tag teams Defari as his smooth delivery delightedly contrasts the prior MC. Evidence brings it home with a no jokes approach to the track as he spits “revenge is a dish that I serve best cold.”

One thing that should be said about Babu’s beats is the stripped down, bare essential style to them. “The Ghetto” is a perfect example with a simple and simply dope, nostalgic piano loop that’s only accompanied by modest drums, Defari’s voice, and the occasional string patch. Where some producers might’ve decorated the song with a plethora of sounds or drums that try to overpower the track, Babu successfully produces the most soulful sound and lets it do its own thing.

Near the end of the album, there’s a stretch of about 4 songs in a row that display that laid-back, sunset music that only the west coast can do. It starts off with the island beat of “6 in the Morning.” Here Defari shows that he’s much more than a smart gangster rapper with the spiritual lyrical knowledge:

“I’m the mountains the earth and the sea
I’m the sun and the stars, the whole galaxy
I’m the energy of life, everything that’s living
I’m the G-o-d who quench the sea for women to bear children
I’m the true and living
Black, natural fact
The O.G. from way back, the yellow mack
King of kings, may the lord bless everything
I’m involved and may it not revolve around hooks
And may the books add strength in my mind
Everytime”

Babu invites his dilated buddy Rakaa to deliver a couple solid verses on the funk drenched “Dark Ends.” Defari playfully uses a woman as a metaphor for his love for tree smoke on “The Good Green.” Over Babu’s crawling, hypnotizing beat is the intriguing voice of Dodee Westbeach. As opposed to a simple hook crooner, he sounds like a more emotional mix of Isaac Hayes and Prince. And no, I’m not saying he’s double the fun of two of the greatest soul/ funk artists ever but he adds an element to the song that would’ve been much flatter without him. Planet Asia and Krondon voice their easily warranted frustration on the police brutality protest of “One Time.”

This is the music that made the west coast great back in the early to mid nineties. There’s music to ride or chill to, while there’s also conscious, conceptual and political rhymes that create a healthy balance of intelligence throughout the album. With this record Babu and Defari have created a chain with virtually no weak links. These two independent elements combine to create a chemistry that goes down smoother than cold beer on a warm California day.