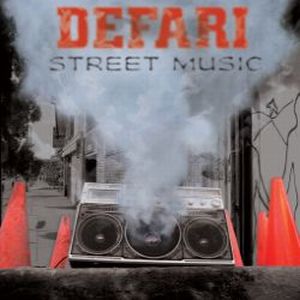 The Likwit Crew (Defari, Dilated Peoples, King Tee, the Liks, and Xzibit) have distinguished themselves in the West for bumping atypical music of their area by opting for a more â€“ dare I say it â€“ East Coast feel. Nonetheless, music is music, and they have brought forth an array of strong hip-hop offerings. Defari, a highly educated and astute artist, accrued high expectations with his first singles and arguably underground classic debut “Focused Daily,” but suffered a blow with the lackluster reception to his follow-up, “Odds & Evens.” However, on this go-around, the LA veteran once again bigs up his city and relives his musical roots on his latest “Street Music.”

With his own take on the booming horns of Brother Ali’s “Project Window,” Defari sets off his third full-length LP with “Hard Worker,” an ode to all those on the grind which punctuates Defari’s classic flow â€“ clear and emphatic to ensure his words are heard. This signature style proves to be highly important on the proceeding track “Either Dead or In Jail” where Defari provides social commentary on both the common perception and somber reality that confront average black Americans daily. Perhaps most poignant is when Defari raps: “[They say we goin’ end up] In a hole or a box/In the projects with pockets of rocks/In the 40s and 50s our grandmamas was made/Now we savages strictly and the problem is AIDS.”

Still, Mr. Herut steps outside his persona and delves wholeheartedly into a Southern-style verse on the bouncy “Peace and Gangsta” and succeeds, but returns to his roots on the lead single “Make My Own” featuring Evidence â€“ a usual offering of up-tempo in-an-out bass and strings by Alchemist which transitions nicely into the hook. Later, Defari opts for a more soulful groove on the song “Burn Big” as he identifies those who have had a deep impact on his life while providing simple descriptions to help ease the ride home:

“If I could paint the whole world, I would paint it with one ray
Of the sun from a hot LA summer day
And if I tell you burn big then let it blaze
It’s the beginning man, we living in the last days
The tricky teachings of the ministry’s be cash plates
Meanwhile in Amsterdam, I be put ash in the jay
It’s pathetic how it’s cool to be a carbon copy
I’ve always said it that my deal was Mahatma Ghandi”

Unfortunately for Defari’s fans whose hopes were pinned on the rapper’s professed return to the sounds of “Focused Daily,” his latest album is a disappointment and lacks both musical and lyrical originality to advance him further from his seminal debut. Instead, his sound and style remain stagnant and is hard-pressed to deter his audience from becoming bored and skipping song selections. For example, while the latter “Burn Big” may be a standout beat-wise, it nevertheless suffers from redundancy (which could have easily been fixed if the background vocal was not constantly re-played), as does several others including “We’ve Been Doin’ This.” Perhaps most annoying are the consistently weak choruses which damage otherwise somewhat quality tracks (for instance, the aforementioned song’s hook gloats, “Likwit sells out at ev-ery show/We’ve been doin’ this”). By using scratches, as heard on “People Trip,” such songs would have been more tolerable. Moreover, while it’s more of a compliment when the host artist outshines his guest appearances, on “Street Music” it is more a reflection of the poor verses supplied by rappers such as J-Ro, Evidence and Tuffy of Channel Live. Most are uninspired and ineffective in transforming their respective songs into something more, and truly offer little in the way of notable performances. Auspiciously, B-Real (“Deepest Regards”) and Rakaa (“Clowns”) provide a welcome change and, albeit nothing amazing, add something significant. As the latter spits on “Clowns”:

“It’s the ringmaster at your service, in the 3-ring circus
Clowns slidin’ and slippin’ and trippin’ on purpose
They fight to save face, lying with a straight face
Fight and try to digest styles and not say grace
A vet’s waste of money like new MCs
But I never blew (blue) cheese like UMC’s”

Ultimately, a shorter song selection and more creativity would have also assisted this album greatly, putting Defari and the Likwit Crew back strongly in the minds of both faithful listeners and new recruits. Instead, he proffers a much too lengthy and, for the most part, monotonous album steeped in mediocrity. However, many might argue that an average Defari is still better than other new MCs at their best. While possibly true, it would have been refreshing to get a solid sophomore effort from the LA vet whose simplicity and clear-cut rhymes have built a strong following in hip-hop.