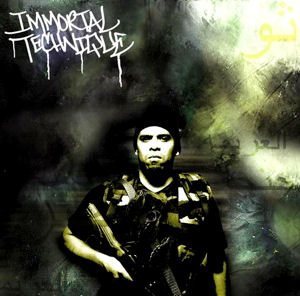 “This is Immortal Technique
Harlem, New York – all over the world
And this is ‘The Martyr’
If you are listening to this
It is your responsibility, to burn this
FOR EVERY SINGLE MOTHERFUCKER YOU KNOW”

Immortal Technique is giving away “The Martyr” for free, so I have a suggestion as to what you can do with the dinero you saved downloading. The album samples dialogue directly from the movie “Network

,” and if you haven’t seen it yet you probably should. Even though it’s 35 years old now, it feels like it was just written and released yesterday. It’s a brilliantly subversive satire that should in all honesty scare the hell out of you for how close it gets to the truth. Long before the 99% percent decided to protest on Wall Street, the protagonist Howard Beale was the original outcry of the disaffected who were “mad as hell and not going to take it any more.” His protest was ultimately co-opted by the very corporations controlling our lives he was crying out against.

Immortal Technique’s artistic struggle is not unlike that portrayed by Peter Finch in this seminal film – trying to protest the culture we live in and the values of it while simultaneously being forced to use the tools of that system to put the message out. Despite the inherent danger that the system itself could corrupt his message, Tech has remained unrepentantly defiant, constantly flipping a middle finger at the U.S.A. and daring people to either love him or hate him. There is NO middle ground. His enemies would label him a communist or a Marxist, or a Che Guevara wannabe, without really having any understanding of who Che is or why he’s inspired so many impoverished and disenfranchised people. I’m no expert myself, but the last time I checked the “Red Scare” was over, Joseph McCarthy had been dead for 55 years, and the 1st Amendment is still the law. But since Immortal is “The Martyr” here, let’s let him tell the story:

“A new American revolution has begun. Not against the forces of a colonial kingdom, but a rebellion against an oppressor that has risen among us. It is not a foreign invasion we have to fear; rather the threat of a force within our nation that has usurped what was once a dream of having the greatest democracy ever known to man. We now live in a world where the population has grown exponentially, and the planet is running out of resources to sustain us all. We in the inner city and those struggling in the suburban ghettos may not realize it yet, but make no mistake – the people who control the technology and run every enterprise that makes up our world have seen this coming for a long time. The ideas of renewable energy, global warming, the idea of collectively working, were purposefully bought out, derailed, demonized, or corrupted, in favor of an economic structure, designed by a monetary caste system.”

If “Ultimas Palabras” is too much for you, I can’t say I’d fault you. It’s not even a song really – it’s an eight minute political speech about Immortal Technique’s worldview. It’s Tech’s warning to those who WILLlisten about the future that may not just be coming, but a future that in many ways is already here. I said that Tech was unrepentant and defiant, but I didn’t say he was anti-commercial. Now it’s true that he’s giving away “The Martyr” for free, and encouraging everybody who hears it to burn a copy and give it to a friend, but he’s wise enough to know that an hour of political speeches no matter how compelling won’t achieve the revolution he speaks of. Tech has the wisdom to couch his social commentary in satire, just like the film he samples from, and on the song “Rich Mans World (1%)” he dares to portray the greedy antagonist to his people powered movement in all his ignominious glory.

“I spent my day pimpin American overseas
Pension for the workers? Nigga please
Embezzlement, etiquette, private settlement
I’m better with Confederate rhetoric
From my mansion in Connecticut
Foreclose, evict hoes at a tenement
I twist words like a speech impediment
I hope you got good credit bitch!!
If not, better get a new job with benefits
While I play golf with niggaz I get cheddar with
New money buys brand new karats
My old money bought your great-grandparents
You got grillz in your mouth, I ain’t mad at ya
I own every gold mine in South Africa
Thanks baby, you made me a billion
Plus I own a building, for each one of my children’s children
That’s the shit!
Snort coke in the whip, Miss USA suckin my dick”

While Technique has over an hour of time to drop dope songs from his own artillery of bombs, he’s also willing to share the hip-hop platform that “The Martyr” provides with like-minded artists. There’s plenty of dopeness to go around as a result: the KRS-One sampling “Mark of the Beast” featuring Akir and Beast 1333, the hypnotic synthesized “Young Lords” with CF, Joell Ortiz and Pumpkinhead, the epic posse cut “Black Vikings” with Poison Pen, Styles P and Vinnie Paz, and the equally epic “Civil War” with Brother Ali, Killer Mike and Chuck D. It’s telling that Immortal Technique could corral so many respected and lauded hip-hop artists, from different backgrounds and artistic styles, to come together on an album they won’t ever see a cent in royalties from. Even Dr. Cornel West can be found on “Sign of the Times.”

Overall what makes “The Martyr” such an important album is not the fact he’s giving it away, nor that he’s got something important to say, nor even that so many talented people are willing to join him in his endeavor. What makes it important is that it’s an album of songs with quality beats and rhymes, delivered by one of hip-hop’s most charismatic yet simultaneously most unheralded artists. Tech is a firebrand and as such people often shy away from him rather than getting burned by the flames, but that only makes him turn the heat up more. He delivers verbiage with a singularly focused intensity few others in rap past, present ORfuture can match, and because he’s bilingual he’s just as likely to rip you in English as in Spanish. ME GUSTO. Download this, make a copy for your friend, and if you feel like it get mad as hell.