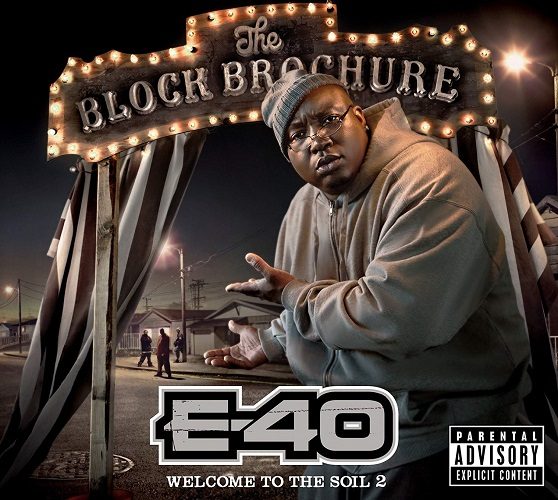 Picking up where we left off last week on the first chapter of “Block Brochure,” we’re back one mo’ gen to bring you a review of “Welcome to the Soil 2.” Coincidentally, just like the opening of this trilogy, Earl Stevens is dropping street knowledge on the very first track. “I’m Laced” would on casual observation be a braggadocious track, and if all you wrote down was the hook, you’d draw the same conclusion – 40 is a California heavyweight. Dig deep in that soil though and you’ll find raps like these:

“If you cain’t cook stay out the kitchen, if you cain’t swim get out the ocean
Don’t hop in the yola game if you’re soft as Jergens lotion
Believe half of what you see, and none of what you hear
Analyze that fool before you let him get in your ear
Sleep with one eye opened, and one eye closed
in case the thirsty and dusty tryin to kick in yo’ door
Never tell a homey how you make love to your woman
cause he might be the same homey that wanna fuck yo’ woman!
There’s three sides to every story – there’s mines, yours and the truth
Niggaz lose they lives every day, over a bootch
Nigga fuck around and get stamped, fuckin around with a tramp
Runnin around here loose without no structure in yo’ camp”

A verse later E-40 drops the phrase “hood Wikipedia” and to me that’s an uncannily accurate description of the wisdom he has to offer. It doesn’t matter if Earl has ever held a Harvard degree when he’s already got a ghetto Ph.D, and he’s not selfish about his street smarts. You don’t have to be in search of an education when you ride through “The Soil” though, because there’s plenty of entertainment in the pages of his lesson book. The pounding beat of the aptly named Chris ‘THX’ Goodman makes “On the Case” a dramatic win – and it even has some solid economic advice for tough times. Speaking of entertainment, I might be the only reviewer left in the world who hasn’t shit on T-Pain yet, and I’m not about to on “Tryna Get It” either. As an added bonus, he produced the beat. As an even MORE added bonus, he and Twista try to one up each other on quick flipping their raps. “The Other Day Go” is a throwback to 1990’s Cali hardcore with rhymes by Celly Cel and Spice 1, and the Trend produced “Function” is all the way new school with YG, IAmSu and Problem. 40 still steals the show though:

“We out here tryin to function bitch
You fuckin’off my high, get up out my mix
You messin up my vibe, I’m tryin to get some crevice
Put her in my ride, take her to the Ritz
I’m toasted and sloppy, I fuck with broccoli
Bacardi 151 out my body, about that green like wasabi
Like Anwari we mobbin, we bossy, back the fuck off me
Getting money my hobby, not getting money is not!!
Only rappers I listen to is E-40 and ‘Pac!
I’m havin my revenue playa havin this guap!
I’m on my fly big nigga shit man I stay laced and groomed
I sprayed myself with sucker repellent my nigga not perfume
Anything you got I can sell it to a hustler, think I cain’t?
Gift of Gab sell the White House black paint
Word candy, S-L-A-N-G
Thinkin about taking a million dollar insurance policy out on my mouthpiece
BIATCH!”

Tech N9ne fans are going to be happy with the second edition of the trilogy, as he shows up twice on “Scorpio” and “Zombie.” For the most part though, Earl is still keeping his guest appearances hella local, which is thematically fine and not ear displeasing in any way. In fact I consider it a treat that he really dug into the well deep and struck the waters of original rappers who came up at the same time he did – Andre Nickatina (formerly Dre Dog) on “Memory Lane” and C-Bo on “Hittin’ a Lick” just to name a few.

Regrettably though “Soil 2” is a little more uneven than the last installment. E-40’s personality and a big bass bottom carry songs like “This Shit Hard” and “With the Shit” (the latter featuring JT Tha Bigga Figga and Cellski) but other tracks like “Red & Blue Lights” and “Grey Skies” are well produced yet uninspired. These are themes E-40 has done before, and done better, so he can’t just get a pass as a hip-hop legend. It’s the inevitable byproduct of recording and releasing three albums worth of material in one shot – it’s almost impossible to avoid cannibalizing from your own repertoire. I’m going to have to split a fine hair by saying this, but in some respects “Soil 2” is the lesser album, even though in others it may be more fun if you’re nostalgic for stars of 90’s Yay Area rap. In that middle lies an uneven-ness that he MOSTLY skates through, though you’ll feel a bump or two on the ride.