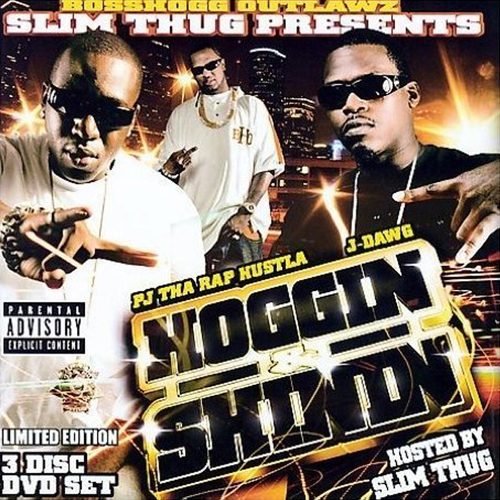 I had a “told you so” moment after I picked up this triple disk set. My logical inner voice kept telling me not to purchase this mixtape. After all, I have only enjoyed the various Boss Hogg Outlawz releases to the extent they heavily featured Slim Thug. Add to that the fact that my judgment is clouded due to the fact that I haven’t bought a CD in well over a month and I was fiending for something. In the back of my mind I also knew that being a sucker for anything with more than one disk influences my purchases. So while all signs pointed to me just saving my dough or picking up something else, I gave this a chance and regretted it instantly.

The first problem with this album is that Slim Thug is lyrically A.W.O.L. on the whole mixtape. It’s not false advertising as “Slim Thug Presents” and “Hosted by Slim Thug” are accurate descriptions and in no way imply Slim Thug being featured on the CD. The Slim Thug fan in me was still hoping for heavy assistance from THE Boss Hogg of the Outlawz. Instead, for most of the 25 tracks we get nothing but PJ Tha Rap Hustla & J-Dawg. The combination isn’t a bad one as out of all the Boss Hogg Outlawz they complement each other well. PJ Tha Rap Hustla is a lot like Slim Thug in the sense that he has a good flow and decent lyrics. What PJ lacks is a voice as distinctive and commanding as Slim Thug, which many times is the very thing that sets Slim Thug apart. J-Dawg on the other hand has a distinctive southern accent but is completely lacking in the flow and lyrics department. The combination plays off each other’s strengths and weaknesses, but the end result is still average.

Previous Boss Hogg Outlawz releases have been purchase worthy because they have been more like albums than mixtapes. In this case, “Hoggin & Shinin” leans more towards the mixtape side of things and it hurts the project. The real difference maker ends up being the number of tracks included. With 25 tracks, most of them in the 2-3 minute range, the mixtape never takes off the ground and the rappers don’t get a chance to establish themselves. Another difference is that instead of getting Mr. Lee or another established producer to drop 14-15 quality tracks, we get no production credits and can only assume this is because it wouldn’t be cost effective for the 25 tracks on here. None of the beats are wack, but none of them are all that catchy. The hooks also tend to be pedestrian, ranging from tired clichÃ©s to screwed and chopped tired clichÃ©s. There’s really nothing to point out as all the tracks waver around the middle of the spectrum. It seems that every track can be summed up by its title and listening to the entire thing won’t reveal much more. You want a song about flossing in your ride? Check out “Crawlin N Tippin” for that. Do you want to celebrate the criminal lifestyle? “Keepin It Gangsta,” “Gangsta Out Tha Nawf,” or “Deep In The Game” will take care of that. Feeling a little remorse after all that gangbanging? “Trying 2 Find Myself,” “Alone In These Streets,” and “Talk About Tha Pain” will help you cope.

As a gangsta rap fan, I’m used to hearing about the same things on almost every album I buy. I don’t usually mind since most rappers tend to put their own twist on it. On top of that, I usually enjoy the rapper’s style/flow so it doesn’t really matter what they rap about. In the case of PJ Tha Rap Hustla and J-Dawg, they don’t put much of a twist on things and I don’t dig their style. PJ upholds the tradition of Texas mixtape rappers in the sense that his focus is on flossing and balling with the occasional metaphor thrown in. J-Dawg reminds me of Mike Jones when he first started rapping, which isn’t a diss as much as an indicator he has a lot of work to do. Neither rapper stands out aside from being down with Slim Thug. Both rappers could surely have some hit singles given the right tools, but “Hoggin & Shinin” isn’t the right tool. A shorter album produced by Mr. Lee and with Slim Thug lending his skills and knowledge might be decent, but for now I’d steer clear of PJ and J-Dawg. For those who are down with the Boss Hoggs, you could do worse than this release and the bonus DVD and Chopped and Screwed disk are a nice touch, but trust me when I say you will appreciate these guys more when paired with Slim Thug and the rest of the Boss Hogg Outlaw crew.