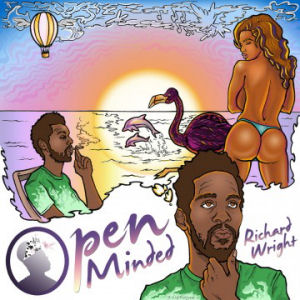 Richard Wright feels that there are too many closed-minded individuals. Or at least that’s what he suggests with his debut solo album “Open Minded,” a title that refers to “the willingness to accept what is new or different than what you may be used to,” according to his Bandcamp page. With open-mindedness as the loose concept behind the release, I anticipated that Wright and J. Bizness, who is also signed to the Irregular Instrumentals label and handles the majority of the album’s production, would stretch the boundaries of the genre and bring something offbeat and fresh to the table. My initial expectations only grew after doing some quick background research on Wright and discovering that he listed Coldplay, John Lennon, and Nirvana as some of his musical influences, along with Jay-Z, Andre 3000, Kanye West, and others. With this in mind, I was excited to see what the up-and-coming Los Angeles native had to offer in terms of musical and lyrical creativity.

The album starts out on the right foot with the intro track “Open Minded,” which has some West-Coast bounce to it with a deep rolling bassline, a heavy drum loop, and brassy synths. Wright’s smooth, almost carefree delivery blends with the smooth feel of the track, and the good vibes continue next on “Get Away,” with soft piano keys setting the mood. The album shifts 180 degrees, though, on the next song, “DuckTale $$$,” with a much more aggressive beat driven by a punchy acoustic guitar pluck and a thumping bassline. As Wright raps about the balance between making music and making money in the rap game, it’s clear he has the lyrical prowess to provide a new spin on the all-too-common subject matter, but the song is still rather materialistic in nature, and it’s a stark change from his initial laid-back approach. The trend continues, though, on the next few tracks, “Greenery” and “OD’d,” as Wright focuses mainly on detailing his love for cannabis and his lifestyle of chasing women and living it up to the fullest. The latter instrumental has a very authentic feel, with sampled drums and gliding synths creating an energetic sound, but I began to question whether Wright had the lyricism necessary to keep the album from growing stale.

Things improve considerably as the album progresses, though, and the mix of J. Bizness’s wide variety of beats and Wright’s straightforward, easily relatable rhymes is generally a recipe for success. “Yeah Right” has an upbeat and soulful vibe, with pulsing trumpets and a drawn-out female vocal sample atop the heavy kick and snare drum, and guest artist Stik Figa contributes an impressive closing verse. Wright outshines fellow label-mates Belvi and Mr. Sobers on “You Don’t Know,” which features funky synths reminiscent of a Mac Dre track mixed with piano keys and a g-funk high-pitched whistle on the chorus.

Then there’s the contemplative “Dreams (Part 1: Fantasies),” with Wright’s smooth flow once again meshing with the spacy beat, as he wonders aloud “What if knowledge was a window and endo wasn’t a hobby/ Tupac was livin’ and Twitter talkin’ with Ghandi.” Perhaps his best lyrical performance, though, comes on the track simply titled “?” (who knew artists could use symbols as song names?). Despite a big-name guest appearance from Phonte of Little Brother and The Foreign Exchange, Wright holds his own, as he spits an uplifting verse about his ascension in the rap game and how he nearly lost sight of the passion and love for music that inspired him in the first place, rapping:

As the album came to a close, the one lyric that stuck with me the most was also one of the simplest â€“ “I feel like bringing Cali back is for me to do/ And I make music from the soul so it really is from me to you.” Regardless of what he is rapping about, it is clear that Wright holds nothing back on the mic and isn’t afraid to say what he is actually thinking. He may not be the most lyrically gifted emcee to come out of Cali, but he simply has a way of reaching the listener with his laid-back delivery and straightforward lyrics that make “Open Minded” a generally enjoyable listen. This is not to say that every track is his best work; there are a handful of times where his subject matter grows repetitive, and J. Bizness’s production skills aren’t always enough to cover up this shortcoming. The bottom line, though, is that between Wright’s rhymes and the significant number of guest artists, there is enough variety to keep the listener engaged. While traditional West-Coast hip-hop influences can be heard at various points throughout the album, it would be incorrect to put the album exclusively within this subgenre, as Wright and J. Bizness sometimes take an experimental approach that makes for a more unique sound. Album names don’t always ring true, but in this case, “Open Minded” is fitting; if you come into Wright’s debut album with an open mind, you’re sure to walk away with at least a few memorable tracks.