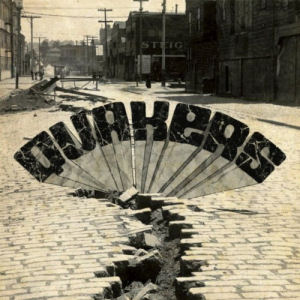 Quakers are a 35-person hip-hop collective. Their core is made up of Fuzzface, 7-Stu-7, and Katalyst. You may recognize Fuzzface as Portishead’s Geoff Barrow. 7-Stu-7 is Portishead’s engineer, and Katalyst is an Australian producer who has worked with both Stu and Barrow. The three decided they wanted to make the kind of hip-hop record that they wanted to listen to. What they came up with is 41 tracks of grimey, funky hip-hop that constitutes one of the best underground rap albums of the year.

Barrow first got involved with Stones Throw eight years ago when Madlib and J Dilla’s Jaylib album came out. That being the case, it’s not surprising that Dilla and Madlib’s influence is all over this disc. Quakers flip dirty soul samples, create distorted electro funk, and generally offer a slightly twisted take on established hip-hop sounds. They keep most of the tracks under the two-minute mark, which gives the album a propuslive and unrelenting feel. It is track after track of MCs spitting fire over funky beats.

The MCs are a combination of established Stones Throw artists, underground veterans, and relative unknowns. Aloe Blacc offers up some raps on “Sign Language,” and Guilty Simpson does what he does best on “Fitta Happier,” sharing verses with MED.

“I’m a fugitive running from my past
How long will freedom last?
Swinging knuckles of brass
Motivated hustle for cash
I’m puffing the hash
Leave a rapper on the ground with his jugular slashed
And laugh at him
It’s humorous
A lotta MCs got one style
Me, I got numerous
I stand out so nobody’s confusing us
I’m way better
Cold winters, beige leathers
Black pistols
Red eyes
Blue Jeans
White widow
Caked up
New green”

Quakers wisely choose to collaborate with MCs who are dropping hard-hitting rhymes that hearken back to hip-hop’s golden age, when MCs actually rapped about real issues. They have Dead Prez rapping about “Soul Power,” Prince Po rapping on “Rock My Soul,” and newcomer Emilio Rojas dropping the best anti-police song in years on “Belly of the Beast.”

“They screaming officer down I scream karma
The police cars swarming the block ready to harm us
[…]
Where the FUCK is the change Mr. Obama?
A lotta promises but never kept”

Other highlights include Coin Locker Kid, who offers up drunken verses on “Russia With Love” and “The Beginning,” Lyric Jones on “R.A.I.D.,” and Booty Brown’s dystopian “TV Dreaming.” There are also tracks featuring Finale, Sareem Poems, Phat Kat, Dave Dub, Buff1, Akil, the Champs, FC the Truth, Frank Nitty, Krondon, General Steele, King Magnetic, Diverse, Quite Nyce and Tone Tank. Every single one of them brings heat. There’s not a tossed off or phoned in performance on here, and every single track is solid.

“Quakers” is everything an underground rap album should be. The beats are funky but interesting, and the MCs all rap like they have something to prove. Despite the many cooks involved in this project, it maintains a sonic and lyrical cohesiveness. If you are looking for quality hip-hop, Quakers has you covered.