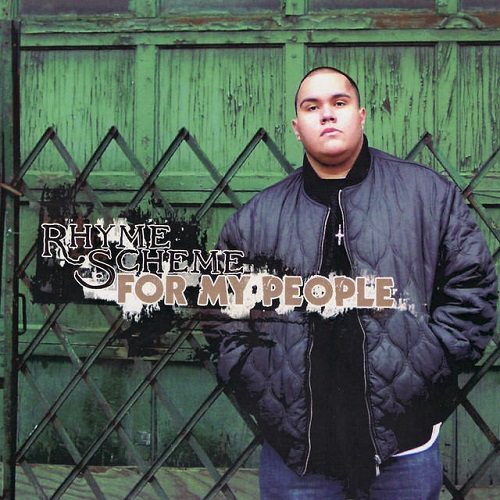 Rhyme Scheme :: For My People

Rafael Navarro b/k/a Rhyme Scheme is a young buck in the rap game at only 19, but thanks to being linked to the Molemen collective out of Chicago he’s got veterano status. If he weren’t skilled on the mic he couldn’t hang with Longshot and Vakill, and if he weren’t lyrically adept Panik and Memo wouldn’t spend time blessing him with beats. Then again membership in a clique shouldn’t automatically entitle one to consideration as a top artist. Rampage might be a member of the Flipmode Squad, but that doesn’t mean he’s on the same level as Busta Rhymes or Rah Digga. Success is earned, not given.

Rhyme Scheme’s bio makes this curious statement: “The characteristically quiet MC acknowledges humility as one of his virtues that have helped him grow as a MC.” Now think back to the last time somebody told you about a hot new rap artists. Were the words they used “He’s so humble and I really dig that down-to-earth attitude” or were they “He’s cocky and talks a lot of shit and DAMN those punchlines are ILL” – was it humility or arrogance that made the man? That’s the nature of the beast, like it or not. Humility may work when you’ve been around as long as Common but an up-and-coming artist like Rhyme Scheme needs an attitude to make an impression on the Chicago scene, let alone nationally. Thankfully “For My People” is not as humble as his bio might make you think. Peep the Memo produced “Silent Night (Chicago Life)” for example – the piano beat is menacing and so is Rhyme Scheme’s rap:

“What the FUCK goin on, is we stuck on this page
I read the same damn book every God damn day
I hear the shots, see the blood, see the young gunning down
Running down the block hunting for somethin they never found
Pounds, to the skies to the eyes of the young
Old men steady hustlin
bustin they ass and proud of the
fact that they makin and rakin in all the cash”

Ain’t no pity in the street life. Rhyme Scheme is not on a negative tip though, he’s just illustrating the environment that he sees – and quite clearly from the rap he’s also condemning the life and wishing for a better way. That hope can be heard in the 21 Grams beats and Scheme rhymes of “Nothin Gonna Stop Me,” featuring a cameo appearance by Visual. In fact cameos are few and far between on this album – Visual appears on one other track and Longshot on another, but it’s obvious from Scheme’s rap on this song that he doesn’t really need guests to hold it down:

“Yo, I ain’t scared man, ain’t no holdin back no more
Yeah no time to think about shit just gotta get my things mayne
I got nephews to look after homey
I ain’t lookin at you dudes man I’m lookin past ya
Think about it, doubt you fuckers know the deal
How the fuck he rate a deal, just say the shit you really feel man
I got people in my back and those I want to help
I’m sick and tired of watchin pops comin in from work, yup
I promise you pa, I’ma get you out of there
No one gon’ stop me, I promise you’ll be out of there
To my girl I got you just stand on my side
I’ma work for both of us but both of us gon’ ride”

That’s not to say all of the grass is greener on the Rhyme Scheme side of things. He’s got a good start as a rapper and he’s certainly connected to the right people, but even they can only add polish to a certain degree. Scheme has a solid voice and a strong delivery, but he tends to get a little ahead of himself in the flow and the diction isn’t always there – words and lines come out garbled. Confidence is one thing, clarity is another. And for better or worse when you’re trying to make a name for yourself, having a gimmick helps. I’m not offended or dissapointed by anything Rhyme Scheme has to say, but there weren’t any lines that made me say “DAMN” and rewind just to hear the hotness twice. There are plenty of dope tracks on “For My People” from a variety of producers – Mike Slugs giving a breezy feel to “I’ma Make It” and a Kanye-esque feel to “Ghetto Child,” Panik coming tight on the layered and complex “Gotta be a Better Way” or punchy and energetic on “Be What I Wanna Be,” but ironically the beats are good enough they started to overshadow the verses. Scheme could also use a little more diversity in his topic matter; not that he needs to be on some Danger Doom “Vats of Urine” type shit but he could at least expose us to more than the cliches of urban destitution and/or escaping out of it. “For My People” is an album that showcases an up-and-coming artist with a lot of potential who is sure to get better as the years go by but may in the short term be better experienced live in Chicago clubs than on records.