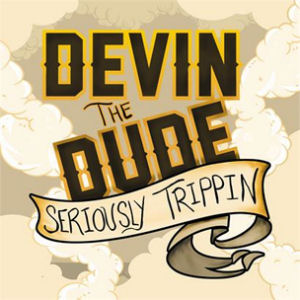 In this age and time where the hottest new rapper seemingly emerges out of thin air every two months and has legions of devoted fans overnight, it’s refreshing to see that there’s still a place for some of the veterans of the game who grew their fanbases organically rather than by some formulaic approach. If you’re familiar with Devin the Dude, part of the previous sentence may have come off as a pun. I suppose you could look at it as such if you want to, but pun or not, it’s true. Devin cut his teeth (or planted his seeds, if you will) with Rap-A-Lot Records in the mid-90s as the breakout member of Odd Squad. He soon became RAL’s own in-house version of the late Nate Dogg, delivering memorable hooks as early as “Hand of the Dead Body” from Scarface’s seminal classic album, “The Diary.” Other standouts include 5th Ward Boyz’ “P.W.A. (Pussy, Weed & Alcohol),” Facemob’s “The Other Side” and Scarface’s “Fuck Faces.” The Dude released his solo album of the same name in 1998 and received his first widespread recognition with his guest slot on Dr. Dre’s “Fuck You” from “Chronic 2001.”

Fast forward about six more well-received solo albums, two group albums with Coughee Brothaz and an EP later and we’re back to the modern day where Devin’s charismatic but ordinary everyman approach to most life situations in general allows him to be as crass as he wants to be without necessarily coming off as threatening and has enabled him to have a cult following among weed-smokers and nonsmokers alike. When “Landing Gear” was released in 2008, Rap-A-Lot, no longer being Devin’s home label, decided to release their own album of Devin material on the same day entitled “Hi Life.” Subsequently, my eyebrows were raised in 2010 when “Suite 420” came out and then just a couple of months later, another release, “Gotta Be Me” hit the streets. While I’ve now come to the conclusion that “Gotta Be Me” was an official release from The Dude, I will have to admit that I initially passed on it due to my skepticism. As of late, Devin’s been on the guest verse circuit and you can hear him on the latest albums from the likes of Young Jeezy and Big K.R.I.T..

This most recent offering from Devin is his second EP and he mostly doesn’t stray too far at all from the subject matter that makes him so endearing to his fans: weed, women, alcohol. Rinse. Repeat. “Seriously Trippin'” opens up with “You’ll Be Satisfied” as Devin puts his own spin on Aretha Franklin’s “Day Dreaming,” promising to give his lover all that he’s got as when he eventually gets close enough to actually make good on his word. However, it must not have worked, because Devin’s courting a new young lady on the following song, “Keep It Tight,” explaining that he doesn’t have time for the games, wants to know where her heart is and promises to treat her right. If you enjoyed “Kanye’s Workout Plan” from “The College Dropout,” it’s likely that Devin’s “Exercise” will appeal to you as well.

“Come on y’all, ya overweight you need to get up
Or lay back down and do some muthafuckin’ sit-ups
Take a walk around the track, put down that Big Mac
You think the only way to lose weight is to smoke crack?
Aww nawwww, look at ya draws
They’re five sizes than they was before
You still stuffin’ ya jaws with all kinds of food
Excuse me, you big ole *bleep* but I ain’t tryin’ to be rude
But you, should stay away from buffets and big meals
Get on the treadmill, see how that shit feels
For about thirty-five minutes or so…
You don’t have to jog, shit, make it go slow
But get on that hoe, and take a step at a time
Sweat, get the weight off and reveal how fine…
That you are, I know it might be a long ride
But I’ll be right here by your side”

As you see, The Dude can be a bit crass, but he means well in the end. “Stay Hard” is a skit that takes the form of a low budget advertisement for a drug to treat erectile dysfunction with a second-rate version of John Witherspoon serving as the pitchman. It’s chuckle-worthy but probably goes on for about twenty-five seconds longer than it really needs to in actuality. “Dat Nigga Dere” finds Devin bumping into a former flame at a bar and reminiscing about the past before being interrupted by some jealous and disruptive cat who deems the woman as his, although he just met her that night. Of course he changes his tone and attitude after he comes closer and realizes who it is she’s sitting with and begins the typical “I’m a rapper and I’ve been trying to get on” spiel. The Coughee Brothaz come through and join Devin on the closer, “420 Highway.” The EP roughly clocks in around 24 minutes and focuses a bit more on the ladies rather than partying, but of course you know The Dude is gonna get his. The “Exercise” joint totally caught me off guard, but I suppose that being able to throw the listener for a loop without losing their interest is a good thing. The production fits Devin’s flow and as I stated before he mostly treads the same waters of familiar topics that he always does, which is probably the way most fans would have it. He might have been trippin’, but this EP is proof that Devin doesn’t take himself too seriously at all.