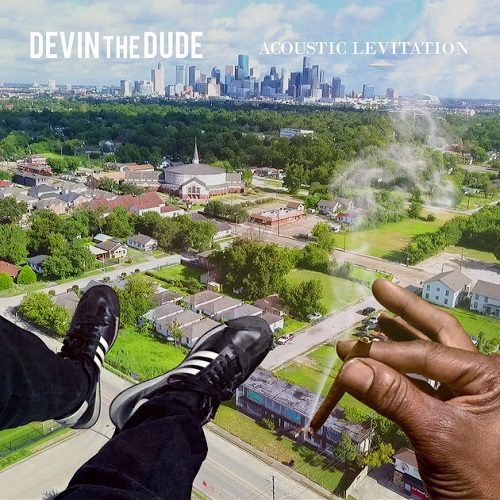 Things never happen fast in Devin’s world, but they happen with consistency. A few months before The Dude made his solo debut in 1998 he concluded an unprecedented run of supporting roles alongside the great Scarface by guesting on his “My Homies” compilation. On that occasion magazine The Source gave Devin his due recognition by declaring him ‘the brightest second fiddle’ of his time, ‘rapping with a mesmerizing southern twang and lyrics that paradoxically mix lewd, crude, gentle and serene sensibilities.’

“The Dude,” his debut, brought this exact blend to perfection. Later records have a higher profile and his 1994 group venture with the Odd Squad is a cult classic in its own right, but for the essential Devin, you couldn’t pick a better place than his first release, the one with him sitting on the shitter. Since then The Dude has soared to professional heights with Dr. Dre and De La Soul gigs, Dre, Premier and (of course) Mike Dean production, critical acclaim galore and a long list of guest appearances that affirms that Devin Copeland gets love practically everywhere.

On “Acoustic Levitation,” his 9th official album, Devin learns once more that this thing called love can be a fleeting phenomenon, particularly in one’s personal life. “Can I” sees him shyly offering to be “the one” (“you’re waiting for… you’re saving it for”) devoid of the usual confidence that she’ll accept him as her knight in shining bling. “Are You Goin’ My Way?” continues the careful L.L. Cool J approach as he offers a waiting bus passenger a ride. As The Nonce knew, “Bus Stops” is “Where the Honeys Is At,” but before he can convince her to get in the car, the bus pulls up. While singers Tony Mac and Lisa Luv continue the convo, the very end of the song knocks our hero out of the skies when he realizes all the places the lady would like to be chauffered to.

While new relationships often seem uncomplicated, reviving old ones is a different story. At least that would be the backstory to “Please Pass That to Me,” an episode where Devin hopes an old flame returns back to him after having found success on her own. The outcome is unclear, despite his efforts:

“I’m just wonderin’, and I’m somewhat ponderin’
if you would stay with me, spend the night, us slumberin’
You’re only in for maybe four or five days
And you just can’t be sure cause you don’t know if I stayed
honest, loyal and true, I promise, I’m spoiled with you
The weed, the wine, Ciroc, the Crown Royal, the brew
could never throw me off balance enough
to go and try to challenge your love
You’re flyin’ to and fro gettin’ paid, that’s good
You said you never would be stuck in the hood
I’m so glad you’re back, you should know that’s a fact
Let me put on this soul track, relax”

In “Don’t Get Naked” Devin takes the opposite role, blocking advances in a relationship that goes in circles. “Let’s not fake it, we ain’t gon’ make it,” he notes, once more displaying a sense of realism not readily associated with someone who ever so often prefers to have his head in the clouds. Maybe it has to do with honeymoons being over so soon, because we’re off to the next one-sided relationship as “Due Yo Thang” offers an emotional twist to the old golddigger theme.

Devin could make an entire album about relationships at this point and he wouldn’t even have to ditch old habits if he penned the ubiquitous love letter to Mary Jane (which he… never did… to my knowledge), but there is this more prominent side to his image that he has to attend to with a certain, pardon the pun, bluntness. “Do You Love Gettin’ High?” ranks among his most mundane smoking songs yet. “I’m in the Galaxy” is less prosaic but will remind longtime listeners of a time when alien Zeldar welcomed them to the Houston rapper’s second album. “We High Right Now” at least has a point, one that Devin and fellow Coughee Brothaz Rob Quest and Jugg Mugg make with conviction. If you need a song to politely tell people, ‘Don’t eff up my high’, this one puts it sufficiently clearly.

The title track on the other hand is seemingly aloof, but the blunt that the floating Devin prominently holds between his fingers on the album cover turns out to be an insubstantial accessory to the artist’s levitation. Relating to the physical phenomenon that objects can be suspended in the air with sound waves, “Acoustic Levitation” has Devin crediting a variety of things for lifting his spirits, of course marihuana, but also a higher power, and especially music. In regards to our little helpers, he even hopes to be able to give them up one day, “just livin’ off life and what it brings to me / flyin’ high with the birds as they sing to me.” “Music does this to me,” he concludes this vintage Devin moment.

Mr. Copeland writes songs that nobody else could have written. Not every single time he puts pen to paper, but from time to time his understanding of the human condition and human nature inspires exceptional songs that simultaneously bring to life the character Devin The Dude and transcend his personal position as an artist who consistently flies below radar level. But even to trained ears it can be difficult to detect Devin’s songwriting highlights, because everything is just so understated and slow-moving. A prime example, “By” seems to function purely based on the limited wordplay the one-syllable word is able to provide, but once you take the journey with him, you’ll be witness to a motivational speech that drives the point about endurance home like few others.

Admired for being down to earth and defying gravity at the same time, Devin The Dude should be allowed his withdrawn moments, whether they result in stellar or pedestrian song material. There’s also no point in critics cockblocking sex-starved attempts like “Tonight” and “You Know I Wantcha’,” both functionally adequate and offering potent production to fall back on. In fact the former’s strong West Indian scent and the latter’s stark contrast between unsentimental strip club urges and serenading instruments highlight the conceptual shortcomings. Devin likes being the butt of his own jokes and life’s absurdities in general, but when he’s just the near-victim in a gory murder story (“Apartment #8216”) that disrupts the flow of the album just as you would expect, you’re going to skip it the next time. After a botched attempt at Bushwick Bill-type yarn, “It’s Cold in Here” follows Scarface’s lead but only comes up with basic observations about the dope game and the music industry.

In conclusion, “Acoustic Levitation,” while providing the usual heart-warming raps, is a bit short on mind-bending rhymes. The lowered ambition is mirrored musically. Rob Quest and producers like Roc & Mayne are certainly competent in providing considerate backdrops that fit the rapper’s current thoughtful disposition, but overall the creativity comes in smaller doses compared to previous occasions. Devin The Dude has, in this reviewer’s opinion, been just ever so slightly undervalued by this publication (and not solely when it comes to the bare figures). Maybe the injustice continues with this review, but when The Dude’s saga will be told to future generations, we will all sing the praise of this unsung hero.