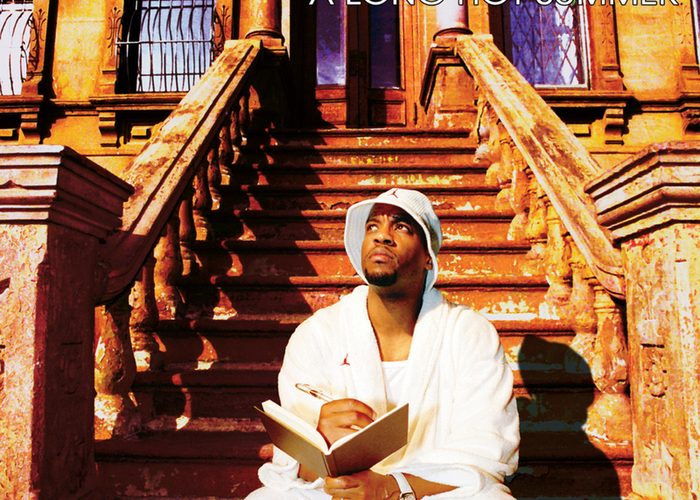 At the dawn of the release of his fifth full-length, the news of Masta Ace’s retirement announcement spread fast through the rumor mill that is the internet. The report said the Brooklyn legend would stop recording to concentrate on behind-the-scenes work, in particular getting his new label off the ground. Days later, a source close to the rapper (producer Domingo) denied any such intention. It wouldn’t have made much sense anyway. A retirement would not only have cast an unnecessary shadow over the upcoming album, it would have also jeopardized the extraordinary opportunity that presents itself to Masta Ace. Perhaps for the first time ever, he’s at a point in his career where he can hope to build a somewhat stable fanbase. Previously, Ace continually had to re-establish himself in an ever-changing environment. The rap world was regularly turned upside down between 1990’s “Take a Look Around”, 1993’s “Slaughtahouse”, 1995’s “Sittin’ On Chrome” and 2001’s “Disposable Arts”. Since then, things have progressed in a steady manner and they continue to move along quite predictably. There’s a market for people like Masta Ace. As much other stuff is out there, the Crooklyn Dodger can secure his place in today’s hip-hop and doesn’t have to rely on his induction into its hall of fame for folks to remember him.

As a rapper, Masta Ace is what Erick Sermon is to producing, what Gang Starr are to rap music in general. He may not yet be the very last man standing, but several pending comebacks notwithstanding, Ace is the only rapper from the ’80s who is still absolutely relevant to hip-hop, relevant as an artist, not because of the kind of extracurricular activities KRS-One and Chuck D engage in, but because he delivers music people deem worthy of spending their time with and money on. That’s what separates him from hundreds of have-beens working on their comeback. That’s why he’s been on recent albums by Tony Touch, J-Zone and Cunninlynguists. And with his own, he once again proves why his contributions to hip-hop never are out of touch, out of tune, or out of time. For those who know him mainly from “Disposable Arts”, on “A Long Hot Summer” Ace invites us once again to “Take a Walk” through Anyghetto, USA, as he relates yet more “Block Episodes”. With a keen eye for detail, compassion for the unfortunate and a good-natured sense of humor, he pens humble and heartfelt songs such as “Big City”, “Da Grind”, “Beautiful” and “H.O.O.D.”. The world may or may not be a ghetto, but clearly the ghetto is Ace’s world, in which he isn’t trying to establish himself as the next hood hero but continues to assume the role of the observer:

“Whether it’s slingin’ or bangin’, drinkin’ or smokin’
there’s bound to be one cat thinkin’ of locin’
The hood’s like a sit-com
Leave your bike outside, come back outside, I guarantee your shit gone
Young cats be sellin’ the rock
Money bustin’ out they sock, mama tellin’ em stop
But desperate times call for desperate means
It all seem so simple when you’re just a teen
Only take one bad apple to poison the good
This for the girls on the block, the boys in the hood
And wherever I go, it’s the same as home
It’s the h-double o-d, the name is known”

Lyrically, it’s time to acknowledge Ace as being on par with rap’s top street storytellers such as Ice Cube, Scarface and Jay-Z. Longtime fans know that Ace has been working on this rep for close to 15 years, beginning with “Take a Look Around” and “The Other Side of Town”. They might also realize that probably no rapper, Ace included, has since mastered the simplicity of his debut. But in 2004, it’s hard to think of an album that is as easy to understand and follow as “A Long Hot Summer”. Shorter than its predecessor, it is also a more cohesive and even effort, making Ace and Brooklyn the focal points of this hour plus narrative told in the now trademark laid-back manner. There’s again an additional story unfolding in the skits, which may lack the refreshing moments of “Disposable Arts”, but is well told and fits the album’s summer vibe perfectly.

At times, it seems all “A Long Hot Summer” needs to blow is a Kanye West cameo, because it’s right in line with West’s simple-but-not-simplistic aesthetic. I’m not talking about sped up soul vocals here (there’s just one), but the emotion and the common sense that permeate this release. Ace has always been hip-hop’s most dedicated humanist, but this time it’s more evident than ever. In “Big City” he addresses “every kid who ball in the park and wish he Michael: Listen, the world don’t like you / But you better keep it movin’ / you better keep improvin’.” Chicago’s Dug Infinite hooks up a soulful, anthemic backdrop for Ace to relate just a few of the 8 million stories in the naked city:

“New York, big city of dreams
To get by, cats doin’ plenty of things
It’s a honest hustle, but you gotta have some kind of muscle
Either it’s that or you sign with Russell
But nowadays the average cat can flow decent
So in your spare time you can go to the precinct
Let me introduce you to some cats who won’t shoot you
Every day they spend in the pen, it’s so crucial
They got kids to feed, wives to hug
They jobs are so strange and they lives are bugged
Look, my nigga Al had a store in his trunk
and the place under the dash where he stored his pump
He had them white-on-white Air Force 1’s for 40
and them itty-bitty Kitty ones for shorty
He was just tryin’ to survive the recession
Now he locked up for stolen goods and gun possession”

With the sonic gold mined by Koolade and Ace scoring with inventive rhetoric and thoughtful lines (“I see a blackman aimin’ his gun / but I’d rather see a blackman claimin’ his son”), “Beautiful” was a mixtape jewel hidden among the usual rubble and rubbish. As expected, it also stands out here, an uplifting antithesis to the negativity we’re facing everyday in our lives, in the news, and last but not least in rap songs. As Ace says himself: “A song like this in these days and times? It’s beautiful.” The current single “Good Ol’ Love” should receive some attention as well, thanks to the much-talked-about 9th Wonder supplying the beat, a simple structure of organ layers and soul vocals. The affection Ace refers to here is the fuel that keeps him going, the support he receives from his fans. But since there are always two sides to a story, Ace sounds increasingly bitter when discussing the details of the music biz. On “Da Grind” him and Apocalypse seem to have learned to live with it, but “The Ways” is among the most sarcastic songs about the rap game:

“A life in rap’s like a knife in the back
This life attracts some of the trifest cats
Niggas gettin’ deals with pipes and bats
If that don’t work, then they strike with gats
I know a few dudes got label deals
cause they crew pack steel like Navy Seals
And I ain’t too smooth or too cool to mention
I done ran up in a label with cruel intentions”

He’s probably right when he predicts: “When Suge hear this record, man, he has to smile.” At least Ace has learned to bear it with a grin as well:

“Def Jam reps wearin’ vests to work
cause they don’t want they ribs and they chest to hurt
If I work for them dudes, man, you won’t see me
when Roc-A-Fella fall out with ODB
That be a day that I’ma call out sick
Cause niggas cool first, then they fall out quick
Keep on thinkin’ that it’s only rap
you’ll be a broke-ass nigga and a lonely cat”

The assumption that mad rappers are often the most inspired ones can be verified in Strick’s guest spot. The Milwaukee rapper was once signed to Tommy Boy, “and look what that got me / a bad attitude and a reason not to be cocky / a huge debt, three lawyers and two managers / a bullshit advance and didn’t recoup the damages.” The rest of his complaint can be found on the album’s angriest and most agitaged cut, “F.A.Y.”, where him, Ace and producer DR Period collectively follow Eminem’s anger management method and reach all the way back for Ice Cube’s famous “Fuck all y’all!” to make their feelings known. While “Wutuwankno” (f. Edo G) is a humorous nod to 50 Cent and grants Ace the opportunity to clear a few things up, including a misunderstanding “Enuff” might have provoked: “I wasn’t dissin’ Ghost / before you try to spread beef, you should listen close / I gotta watch what I’m yellin’, fella / cause some fans dumb like Helen Keller.” And some fans are what you call groupies, some of which apparently fell for the game on “I Like Dat” and now find themselves starring in “Travelocity” (again w/ Punch & Words). But like Slick Rick, Ace can go from raunchy to romantic in a sec, as evidenced by “Brooklyn Masala”, a _Mississippi Masala_ type love story without the cultural conflicts.

In the disappointment department, you would have to mention “Do it Man” with its pointless Big Noyd feature and “Oh My God”, a track that fails to measure up to the A Tribe Called Quest classic of the same name, pairing Ace with Psycho Les and JuJu over a Beatnuts-soundalike beat by Xplicit. There’s just no comparison to “P.T.A.”. But the rest of “A Long Hot Summer” calls for your undivided attention. If you don’t know what to make of “Soda & Soap”, you can still rejoice in the wordplay of the first verse and DJ Spinna’s spacious beat. What prevents “A Long Hot Summer” from reaching rap perfection is that content-wise, Ace doesn’t really offer anything new. Industry rule #4080 has already been exposed ad infinitum. The hood has been described as a cross between a “sit-com” and “Vietnam” for ages. Still, even if its set and characters evoke a dÃ©jÃ -vu, this is a highly personal album, right up to the closing “Revelations”, a worthy successor to “No Regrets”. It’s years of experience wrapped up in a smooth, soulful package. It’s the album many self-proclaimed ghetto prophets and poets dream of making. It may lack conceptual joints Ã  la “Unfriendly Game” or “Dear Diary”, but “Beautiful” may just be the cleverest ‘concept song’ in recent years.

In the autumn of his career, Masta Ace has lost one title, though, and that’s the one of the Music Man. “Revelations” is the only sign of Ace the producer (AKA Ase One). But more importantly, his first two albums remain his masterpieces because that’s when Ace was an MC in every sense of the word, making rap seem like the artform that it can be. Nowadays, he relies mainly on his steadfast delivery and flawless rhyming, forsaking the spectacular styles of his youth. But maybe that has been Ace’s intent all along, and in his quest to find the perfect medium to deliver the message, he went back upstream to the very source, where all thoughts are clear and pure, and uncovered the very essence of rap, drawing words that motivate, words that move the crowd:

“For everybody workin’ nine to five
for everybody tryin’ to rise with they eyes on the prize
I’m with you, we all goin’ through it
but yo, deep down inside I know we still gon’ do it”