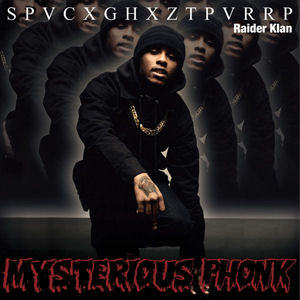 Not only did he sign beats on “Live.Love.A$AP,” one of 2011’s most acclaimed mixtapes, but he also called A$AP Rocky his “twin” on the latter’s “Purple Swag: Chapter 2.” But while Rocky encodes his affection for Houston rap and Bone Thugs-N-Harmony in a relatively open manner, SpaceGhostPurrp immerses himself into the music he adores to the point where he envisions himself as an obscure regional rap artist from the era when ‘tapes’ were actual cassette tapes. Born in 1991, he stickers his net tapes with slogans like “Dopest album in 1991” or “Trillest album in 1995.” He also actually travels further back in time than his “twin,” to the early to mid-’90s, the days when Bone was still in Cleveland waiting to be discovered by Eazy-E, and DJ Paul, Juicy J and Lord Infamous were in a group called Triple Six Mafia. From the Memphis underground in ’92 to the Miami underground twenty years later, SGP translates the dabblings of local gothic do-it-yourself rap to modern times.

Fully titled “Mysterious Phonk: The Chronicles of SpaceGhostPurrp,” his first retail release compiles mixtape tracks into a cohesive whole. They have been professionally polished (at London’s Abbey Road Studios, nonetheless) but remain shrouded in a ghostly, musty atmosphere. SGP sets his music up meticulously, usually combining spooky synths with slender percussion to create unobtrusive but hypnotizing beats. “Mystikal Maze” opens with muffled human background noise, then adds cavernous synths eventually underpinned by delicate percussion. Interpreting his own work, SpaceGhost explains that “the screamin’ in the back represent hell’s grounds,” which would certainly go with the nihilistic worldview he expresses with statements like “My heart real black, I don’t trust a bitch / I hate this fuckin’ world, y’all can suck my dick” and “I always try to smile but the world is fake / the world is a house with a yard full of snakes.”

“Real shit will always last,” he juxtaposes on the following “Bringing Tha Phonk,” which recalls Cold 187um’s ethereal late ’90s productions. “Tha Black God” would have been at home on the second Boogiemonsters album, “God Sound,” right down to the distorted voice. Houston’s South Park Coalition is another reference point, in the case of “Elevate” and “Don’t Give a Damn” actually in both the beats and raps departments. Still the beatmaker manages to make the opaque and otherwordly sound his own. SpaceGhostPurrp is an instrumental musician, first and foremost.

That he also raps is part of his enthusiasm for the entire genre (“I love music so much,” he professes on “Osiris of Tha East”) and it is part of his act as dealer of the ‘phonk’ who has to pitch his product. While he gets credit for being able to adjust his vocal performance more than many a professional rapper (sometimes he whispers, then he belts out his bars), as a rapper he is less talented than the producers extraordinaire whose rapping endeavours we’ve come to tolerate (Mannie Fresh, Pete Rock, et al). The Floridian is as often an interference on his own tracks as he is their rightful owner. He takes hook repetition to a new level of nuisance. He strings together clichÃ© phrases that mainly seem to serve the purpose of hitting the proper note on the lyrical side. And not only that, he delivers them to the exact same effect, dumbing his raps down when his beats aim higher. There are tracks, like the Timbaland-meets DJ Paul & Juicy J draft “Get Yah Head Bust,” that become monotonous only because of the rapping. But there are also tunes, like the melodically rich “Raider Prayer,” that would stand out even on “Live.Love.A$AP.”

Reflecting the mixtape stage of SpaceGhostPurrp’s career, “Mysterious Phonk” presents us with a teenage rap nerd with peculiar tastes who thinks female moans of pleasure (as heard on 4 tracks) are a cool stylistic element and who can’t decide whether to keep calling women the same names as every other rapper or to go for the noteworthy “goddess” that he uses on 3 of the compilation’s 14 songs. The inspiring message that is clearly part of the appeal (“Tha Black God”) is still buried under too much empty rap rhetoric. When he says on the new track “No Evidence,” “I’m weird, it ain’t hard to see, yeah I know it / My mind is hella free and I ain’t scared to show it,” he has yet to show how free his mind really is. At their worst “The Chronicles of SpaceGhostPurrp” sound like a parody of later Dipset (“Been Fweago”), but as a whole, it’s a convincing representation of an interesting new hip-hop artist who is both individual but also happens to be part of a greater movement of kids playing rap by their own rules.