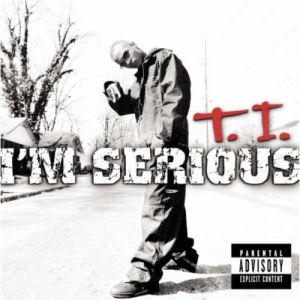 “Ay take a good look at me – now picture me unhappy
No cash and outta fashion, not flashin
Picture me doin bad even if I wasn’t rappin
Picture me even breathe on the mic not snappin
I’m fire hot not lukewarm, my arms frozen
Picture me in a room full of hoes unchosen
Picture me with no P.O. and no ‘dro
Picture pimps walk with some broads and ain’t gettin no throw
L.A. gone and I ain’t gotta deal no mo’ (picture that)
A ghetto vision ain’t real no mo’ (picture that)
A T.I.P. ain’t worth a mill’ no mo’
He still so-so (picture that) he still po’
Nigga picture that, a matter fact
picture Tip gettin anythang other than rich
Now can you picture this young, pompus, arrogant son of a bitch
labelled as anything less than ‘the shit’? I can’t see it”

It’s a testament to Clifford Harris’ consistency that this braggart rap from the title track of “I’m Serious” sounds just like anything he would have released in 2012, save perhaps for the cameo by Beenie Man. These days if he had some spitting chatta on his album, it would beNicki Minaj. Despite that this song and its respective album represent the only commercial failure of T.I.’s career to date. It’s remarkable that he rebounded from being dropped by Arista Records to becoming a worldwide hip-hop icon in less than a couple of years. I’ve got the same question T.I. does – “What Happened?”

“Never thought I’d be, layin in a puddle of blood, tryin to breathe
I don’t want to die but somethin is tellin me it’s time to leave
Say my apologies, maybe find the peace of God
Seen my whole life flash before my eyes, and now it’s gettin dark
Body temp done dropped, goin in shock, cryin out of fear
Closed my eyes, take my last breath, and I’m outta here
In my life I smoked a lot of weed and drunk a lot beer
Sold a lot of ki’s, but that shit don’t even matter here
Somebody said walk toward the light, but I ain’t ready to go
Am I dead, is it over? Ye ain’t ready to know”

His rap clearly wasn’t the issue. This Maseo produced track has enough thump for the ride, but it’s the thought-provoking lyrics that really carry the track. Despite being young and fairly unknown at the time, he was already taking the chance to speak to his audience personally, as opposed to just maintaining the hip-hop status quo. Speaking of beats, most of the production of “I’m Serious” is on point too. The crawling funk that Brian Kidd provides on “You Ain’t Hard” is among my favorites, and makes me wonder where that Kidd went. The first of what would be many collaborations with Jazze Pha took place on the pimpalicious “Chooz U.” Around the same timeThe Neptunes turned into NERDS, they took the time to break off their signature sound on “What’s Yo Name?” And quiet as kept, Maestro got one of his earliest chunks of funk off on T.I.’s “Hotel” featuring Too $hort. Check out Clifford’s pimp swag:

“Miss lady built like a Amazon
A five-nine light brown wit some sandals on
The kind of ass that make you wanna grab a handle on
and fuck her all day in the hallway with the candles on
So I wave, and I speak and conversation cool
She asked my name, where I’m from and why I talk the way I do
I said ‘Cause I ain’t from round hea, I’m from Atlanta shawty, but anyways
We can still get together cause I’m gon’ be here for a couple days’
And then she say – she never been to Georgia, she been dyin to visit
Well I’m in room 312, at the Sofatel, I’m sho’ that they list it
She got the digits, say she like me, and that we can be friends
If I ain’t welcome shawty, don’t invite me, ain’t no need to pretend
I’m wanna lick on your neck, kiss ya ears, and make your knee bend
Put your ass in positions you never thought you’d be in
Now I’m tellin you shawty fuckin wit me like divin off the deep end
Have you sneekin creepin in Georgia, a freak on the weekend”

The more one listens to “I’m Serious” the more mystifying it becomes that Arista Records couldn’t find a good way to market and sell this album. Even when T.I. indulgently produces his own track on “Grand Royal,” the results are still enjoyably satisfying. It’s not as if he was too gangster or his accent was too thick to maintain a broad crossover appeal – dozens of hits that followed in the decade since disproved that. It’s not as if the album didn’t deliver good value – 18 tracks and over an hour of music with very little material that misses the mark. He even throws in a bonus track remix of “I’m Serious” featuring many of the most popular Southern artists of the time – Bone Crusher, Pastor Troy and the Youngbloodz. So what went wrong?

To be honest the only reasonable conclusion one can come to is that they never intended to push T.I. in the first place – they signed him to purposefully take a loss on his album just for the tax writeoff. That sounds like a horrible conspiracy theory, but the truth is, it happens in the music industry all the time. Though his voice is noticeably younger on “I’m Serious,” causing him to sound like some wine that was just bottled and hadn’t even had time to mature, the essence of the star he’d become is hard to miss on songs like “Do It” and “I Can’t Be Your Man.” Even having listened to the album when it came out, listening to it again in 2012 is a revelation, showing what I suspected all along when writing about “Trap Muzik” is still true: “T.I. lives up to the potential he had on ‘I’m Serious’ but was never seriously given a chance to show the world.” Well if you’re a T.I. fan but don’t have this album, now’s your chance to go back and check this one out to see what I was talking about.