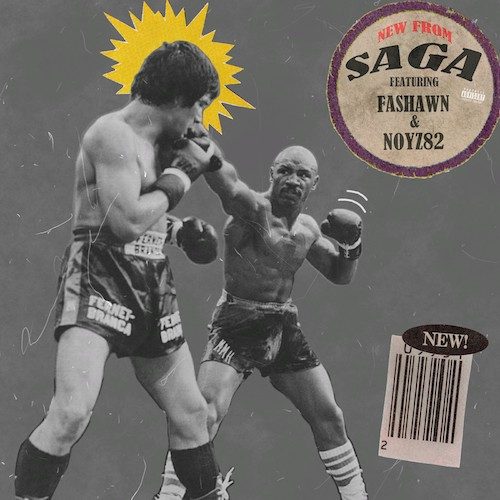 I’m old enough that I immediately knew what Saga’s “Hagler EP” was referring to without having to think twice (okay Boomer). During my childhood Marvelous Marvin Hagler was a legendary middleweight boxing champion. His reign on the top was NOT short like leprechauns — he was the undisputed best in his class from 1980-87 and had the world titles to prove it. As his era of dominance started to wane, a new era was ushered in by heavyweight hitter “Iron” Mike Tyson, but in retrospect sports historians consider Hagler one of the greatest boxers of the 20th century. He may not have achieved the mainstream fame and notoriety of Muhammad Ali nor the infomercial crossover celebrity of George Foreman, but with a career record of 62-3-2 and his final fight being a split decision loss to the equally lauded Sugar Ray Leonard, his legacy is secure for future generations.

Saga is trying to honor Hagler in both name and deed by sampling from his career throughout this six song EP, but the reclusive emcee needs a proper introduction before he can do that. It would be far easier if I had a previous review to fall back on, but his last EP was two years ago and we didn’t cover it. (Sorry!) Here’s what I can tell you though: his debut album was produced by well lauded instrumentalist Marco Polo, he’s toured with the likes of Asher Roth and Fashawn, and he’s done cameos with the likes of Freddie Gibbs and Roc Marciano.

Beyond that Saga is a rather enigmatic figure. Where was he born? How old is he? What’s his real name? Can’t tell you. I know he’s the son of Richard Quarantello and a vegan since 15. That’s it.

Saga’s flow on tracks like “Ratchet Alibi” reminds me of a less angry/less political Immortal Technique. He’s self-produced on this album (and now rolls with a production crew that includes Marco Polo) and deserves the props for balancing both his bars and beats nicely. My favorite of those joints would be “Cry Wolf” with Fashawn. The two play off each other nicely vocally, with Fashawn’s higher pitch balancing Saga’s raspy delivery; Fashawn’s flashy floss flow complimenting Saga’s street sensibilities. The wailing licks and slow drums create a dark moody instrumental that gives the duo plenty of room to breathe. “Every release is feeling like the 90’s … nostalgia is timely, like the Knicks and Pat Riley” raps Saga, which leaves me thinking Saga is probably closer to my age (okay Boomer).

It’s hard to go SUPER deep on an EP that’s only six tracks and under a half hour long, but the mood is ably set by “Oasis” on the opener. Saga wants to “control the whole crowd” and fiends for the microphone to do it with, but there’s also some gems sprinkled in when he says “I learned from history so the future’s not a mystery”. That’s ultimately where I have to walk a tightrope in describing Saga — the brother’s deep at times, his vocals are well delivered, the music is well produced — so why isn’t he as legendary as the boxer he references or the “Illmatic” style albums he’s nostalgic for? Perhaps if he came out in the 1980’s or 90’s he would be, but nowadays there’s a dozen new rappers (and albums) every week. We live in an era where it’s almost as good to be TERRIBLE as dope because as long as you stand out you get noticed. Saga may be a victim of his own competence because he’s neither the best NOR the worst to ever do it. He’s good. Is that good enough? I’ll say this much for the “Hagler EP” — I ain’t mad at it.