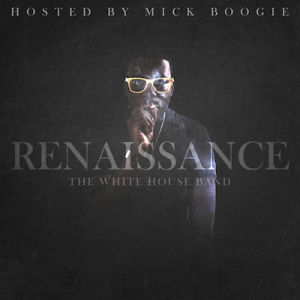 From the jump The White House Band proclaims itself to be “the most refreshing” release in hip-hop. Okay, hyperbole is to be expected, but I’m staring at this dude who looks like a cross between Percy Watson and Charlie Murphy, which leaves me unsure what kind of “refreshment” I’m in for. I hope it doesn’t involve a couch, or a German suplex, or a German suplex ONTO a couch (though that would at least be a softer landing than a canvas). Well let’s see what this dude is about. You at home can play along with me as we watch “Have it All” featuring GangstaGrass.

“I’m trying to have it all, homey that’s my mission
I be on my grind, tryin ain’t enough to get it
So I work hard, word to my father
cause he a deadbeat so you see I’m forced to go harder
I’m in early – I study longer
I stay longer, plus I got patience/patients like a doctor
See, they fork over ten years for the good life
Big house, fo’ kids and a good wife
Two cars – one paycheck
Invest in foreign stocks, dawg that’s a safe bet
Gettin paid – nigga that’s my dream
And I’ma have it all – fuck you mean?”

You may have quickly ascertained there was no rapper named GangstaGrass in that video – there was only one rapper in that entire song or video – so who exactly was the “feature” then? Well “GangstaGrass” is actually a collective of like-minded artists and producers who believe in mixing bluegrass music with hip-hop. That’s a whole different subject for a whole ‘nother review. In the here and now, what you need to know is that The White House Band is (like Heath Slater) a “one-man rock band” who is his OWN featured artist in his own group. Weird? Not in this music industry, although it’s arguably ever so slightly egotistical. Still anybody who can play guitar and rap at the same damn time ought to be a little bit proud of it.

Apparently being a one-man rock band just wasn’t enough, so for “Renaissance” the man who also goes by the name David E Beats decided to bring in Mick Boogie as the host of the album. I honestly don’t know what Mick Boogie adds to this album (no offense to duke meant, I’m still a fan of his work) but after hearing the phrase “Yeah! Whattup? This David E beat is SICK!!” over and over again I’m starting to agree, maybe just by sheer repetition. “Ghost” featuring Tupac Shakur is pretty ill, and a little spooky to boot, and samples from an interview where Shakur rants and raves but ultimately concludes “There’s no place that I won’t go, and I feel as though, if you got love and you puttin out real shit, you can do that. If you kickin that shit from yo’ heart, you can wherever yo’ heart wants you to go.” Just one of many reasons he’s still missed today.

Back to The White House Band though, or David E Beats, or whatever it is he wants to be called today. He’s certainly not lacking in confidence, although he’s at least humble enough to be thankful for it, as his current single is “TGIF – Thank God I’m Fly” where he brags that “I got mad swag, I impress myself.” Over repeated listens I’m coming to the conclusion that WHB is what would happen if a Gucci Mane grew up in the Northeast. He doesn’t really talk about a whole lot other than how great he is and how fly he is, even on songs that are ostensibly “Heavy.” “Happiness” to him is a big car and a lot of money. Does he have “Spirit” in him? “I see poverty, but I never touch that/Turned down a deal, for White House Band/used to be four, now there’s one man.” OH. Should have known there was more to the story of WHB than his bio was saying. Still the most important thing I glean from that song is not that he kicked his former bandmates to the curb, but that his “spirit” is strictly his spirit to succeed by any means no matter what it takes.

In conclusion I have to admit that David E Beats/WHB is an incredibly talented and versatile cat – he’d be that rare “Triple Threat” that J-Live talks about as a rapper/guitarist/producer (substituting guitarist for deejay). There is only one problem though, and it’s a significant one – on the mic he’s no J-Live. While I’m impressed that he can pull off all of these things at the same time, with what might actually be a schizophrenic level of commitment to being multiple things at once, I can’t say he’s equally good at all of them. As a guitarist he doesn’t embarrass himself, as a producer he’s above average, and as a lyricist he’s competent for being commercially succcessful but just doesn’t light my world on fire. I’d listen to “Renaissance” again but in the end the most “refreshing” thing about it is the (David E) beats.