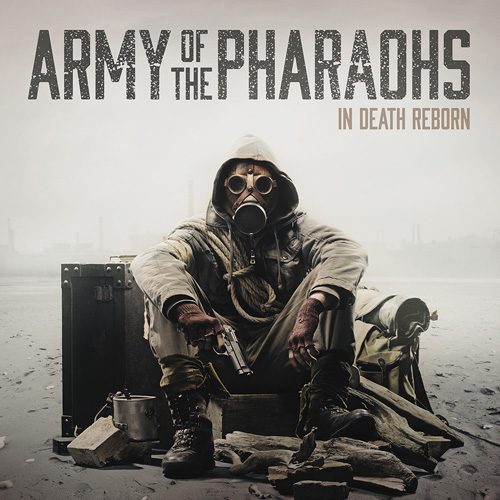 Army of the Pharaohs :: In Death Reborn

I feel like I’m being harsh about this new album from the underground’s most prominent supergroup, but I feel it sums up what they have become. Army of the Pharaohs are very much a modern example of underground hip hop. Despite proclaiming authenticity throughout each of their albums, “In Death Reborn” feels the most manufactured of all their releases. Production is provided by different producers on each song, and the vocals lack any real cohesion – almost as if each one was recorded on its own, emailed and pieced together. The continued obsession with violence and posturing borders on bland, lacking the tongue-in-cheek, over-the-top humour of Onyx and M.O.P. (other than the reliably goofy Celph Titled).

As a fan of Vinnie Paz, Apathy, Blacastan, Esoteric, Celph Titled, Reef the Lost Cauze et al, Army of the Pharaohs should be a treat, yet it seems that the formula is finally getting stale. Each emcee relies on a rigid sixteen bar allocation, rarely interacting with one another or providing a feeling of one unit that large groups such as Wu-Tang Clan and Boot Camp Clik have. Production also remains solid rather than outstanding, utilising ever-present hardcore beat-makers such as Vanderslice, C-Lance and Stu Bangas. However, it’s refreshing to hear one of the best British producers (and rappers) in Leaf Dog lace “The Demon’s Blade,” an explosive neck-shredder that feels like the punch in the face the record needs after 15 minutes of predictable, water-treading hip hop. It harks back to posse cuts such as “Seven” and “Battle Cry” from earlier LPs. Another noteworthy performance comes courtesy of Juan Muteniac, with “Visual Camouflage” oozing character and ultimately lacing the rhymers with a track worth rewinding. The rest of the record is decidedly average, with a sound that’s neither standout or straight up wack.

The problem with “In Death Reborn” is that AOTP could do with a rebirth themselves. Apathy rhyming Joan of Arc with Napoleon Bonaparte? Check. Vinnie Paz sharing his perverse infatuation with firearms? Check. The tracks are well-worn retreads with interchangeable vocals – each track consists of battle rhymes and boasts, but that’s always been what AOTP is about. It’s just disappointing that with all the creativity that these emcees possess (as shown by their individual projects) that only Esoteric continues to perform at a level above the others. Blacastan was one of the hottest prospects after he dropped “Blac Sabbath” and here he just blends in amongst the likes of Planetary and Reef the Lost Cauze. Des Devious, a vicious street rapper in the vein of Sheek Louch has the ideal, aggressive nature that is wholly underused. Compared to “The Torture Papers” where tracks dared to only have three members on them, the listener is hit over the head with a constant barrage of bars that none of it really registers for long.

Let’s just clarify that this review isn’t so much of the album from a critical standpoint, this is vicious, street rap not too dissimilar to Onyx with “#WakeDaFucUp”, except this is a case of “too many chefs spoil the soup.” I was a fanboy of Jedi Mind Tricks, that ejaculated wildly along with every other JMT fan when AOTP launched their first albums and you eagerly anticipated which emcee jumped on the mic next, but it just feels like a stagnation period for the guys right now. Despite my reservations, the Army have found their lane, and judging by impressive first week sales and the scheduled November release of their fifth LP it will be lapped up by their cult-like followers. As a whole though, it’s more of the same and if you aren’t a fan of their style, this won’t change your mind.

The Demigodz’ “Killmatic” was one of the best releases from 2013 and I still listen to it regularly – “Worst Nightmare” has been my ringtone for over a year now. Despite AOTP having two-thirds of The Demigodz involved (no Ryu or Motive) they lose some of their intricacies as well as a lot of the fun that made “Killmatic” so enjoyable. There’s a noticeable reliance on the bigger names that will please some fans, but does mean that some members are restricted to just one performance. Loyal soldiers such as Demoz, King Magnetic, King Syze, Des Devious and Doap Nixon get about forty seconds each which is a shame, particularly when the ever-present Vinnie Paz is on virtually every track, spitting similar verses throughout. It’s logical of course, given that he is arguably the most popular Pharoah, but it would have been nice to hear some more from the guys he has approved of. Vinnie Paz has created a monster that’s barely recognisable from the original line-up with Bahamadia and Chief Kamachi spitting gems over more traditional production, and it’s proven fruitful – it’s just all getting a bit tiresome for this long-time follower of the Pharaohs.